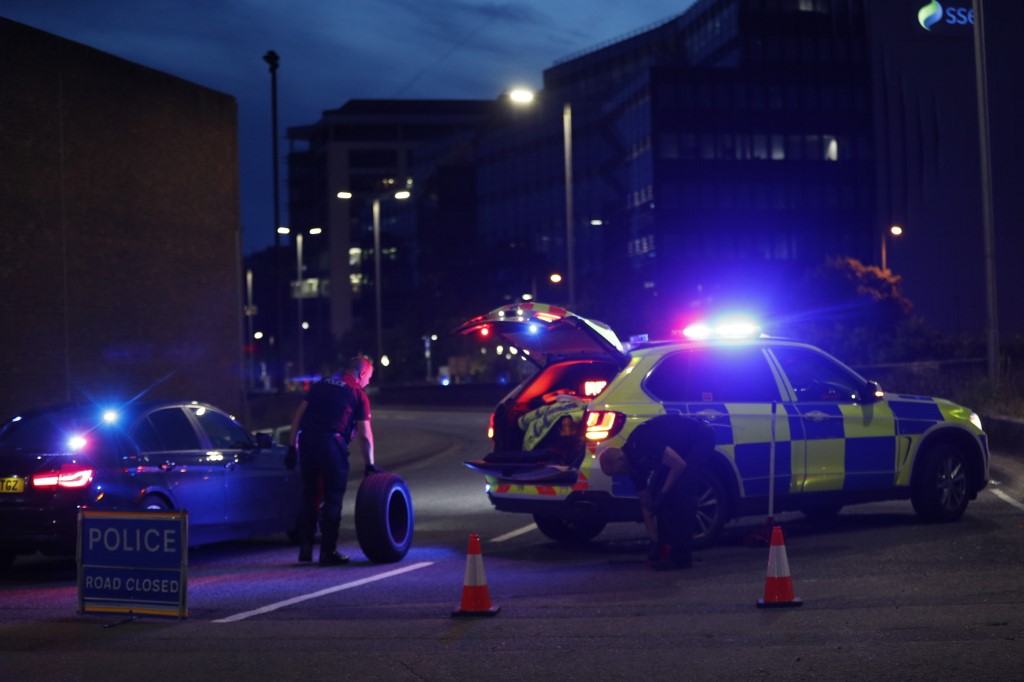 Police officers change the tyre of a vehicle at the police cordon near Forbury Gardens park in Reading, west of London, on June 20, 2020 following a stabbing incident. (Photo: AFP)

Sky News quoted sources as saying that it is believed that the multiple stabbing incident, which took place at Forbury Gardens in Reading, is terror-related.

Police said they had taken several casualties to the Royal Berkshire Hospital. A hospital spokeswoman confirmed that two of them were in critical condition in the emergency department.

Earlier, local police said a man was arrested at the scene and is now in custody.

British Home Secretary Priti Patel tweeted, saying she was "deeply concerned ... My thoughts are with everyone involved, including police and emergency responders at the scene."

Forbury Gardens is about 100 meters from the town's train station and is opposite Reading Crown Court.

A large part of central Reading has been cordoned off by police on Saturday night in what has been described as a "major incident".

Witnesses claimed on Twitter that several people had been stabbed in the park and footages appeared to show several people being treated for injuries.

There have also been images of multiple air ambulances posted as they landed in nearby Kings Meadow.

"We are aware of reports of an incident in Forbury Gardens, Reading,"  Thames Valley Police said in a statement. "Officers are on the scene and investigating the incident."

A Black Lives Matter protest took place in the park earlier in the day but several local residents claimed on Twitter that it had ended two hours before the incident.