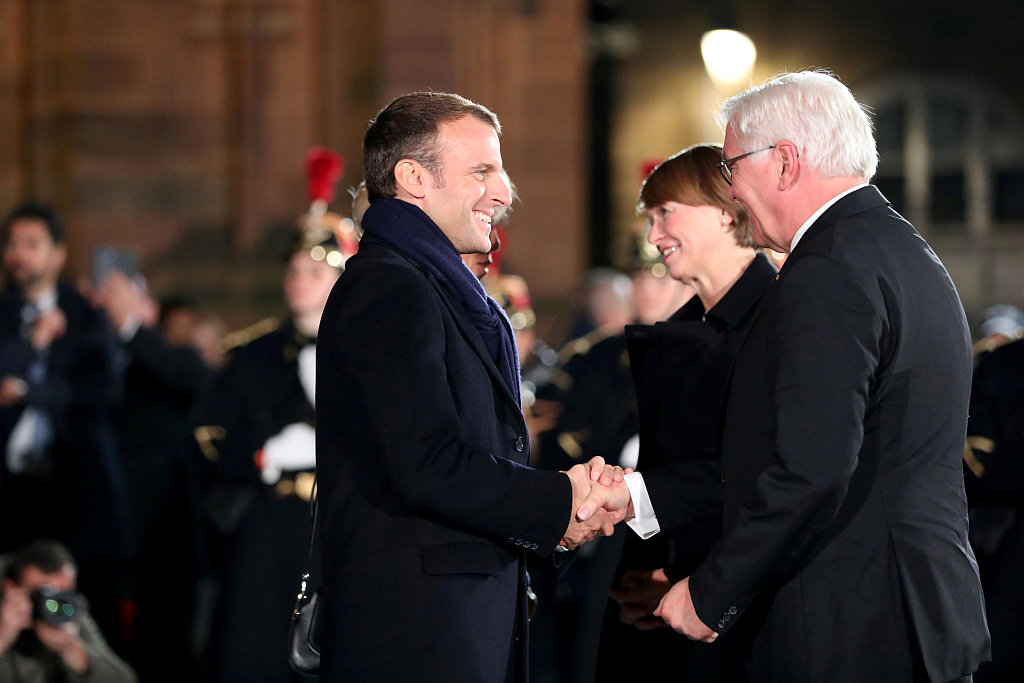 The French and German leaders will sign a follow-up pact to the 1963 Elysee Treaty on Tuesday to stress the depth of the partnership at the heart of the European Union.

The initiative aims to send a muscular response to eurosceptic forces as the bloc grapples with Brexit and likely gains by populist-nationalist parties in May's European Parliament elections.

The new Franco-German friendship treaty has been criticised variously as going too far and falling short of its potential, and mocked as the symbolic initiative of two weakened leaders.

While Chancellor Angela Merkel is now serving out her final term, President Emmanuel Macron has battled the rise of the yellow vest protest movement and plummeting approval ratings.

Far-right leaders in France have meanwhile attacked the pact with a slew of conspiracy theories which broadly claim that Macron is "selling out" French sovereignty to its neighbour across the Rhine river.

The new pact will be signed in the German border city of Aachen, known as Aix-la-Chapelle in French, on January 22, which marks the day in 1963 when post-World War II German chancellor Konrad Adenauer and French president Charles de Gaulle inked the Elysee Treaty in Paris.

The new document commits both sides to annual government meetings, on top of regular meetings bringing together 50 MPs from each country. Here are three other key elements of the 16-page treaty:

Both countries pledge to stand shoulder to shoulder in case of a military attack against either of them, reaffirming a commitment already written into EU and NATO treaties.

Paris and Berlin will also create a new joint Defence and Security Council and seek to harmonise rules for military equipment exports, which are now usually handled more restrictively in Germany.

France also backs Germany's long-running and long-shot campaign for a permanent seat on the UN Security Council -- a move which also buries proposals for Paris to give up its seat in favour of a combined EU representation.

Loudest among the protesters, French far-right leader Marine Le Pen has predicted that Paris will eventually give up its UNSC seat to Berlin and even share control over its nuclear weapons arsenal.

A new 10-member joint council of experts would seek to find ways to harmonise tricky areas of economic law and remove investment barriers.

Both countries also want to boost cooperation in digital-economy and artificial intelligence research and to promote renewable energies to fight climate change.

A major focus is to boost people-to-people ties along the 450-kilometre (280-mile) common border, which many people cross daily for work, study or fun.

A new "citizen's fund" of an as yet undetermined size would support city partnerships and cross-border initiatives ranging from bilingual child care centres to public transport links.

Paris and Berlin also want to encourage more citizens to learn each other's language and improve the mutual recognition of academic qualifications.

To facilitate all this, some regions could be granted greater autonomy to cut through rules and red tape, another idea that some critics view with suspicion over too many powers being handed over.