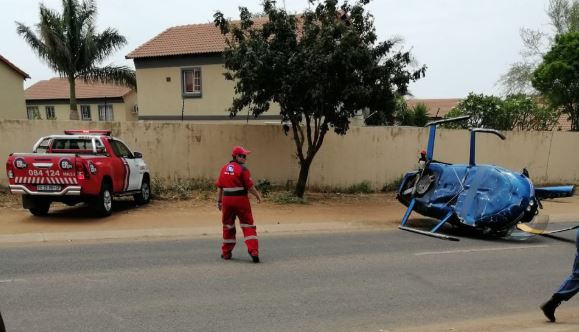 A helicopter crashed on Friday on a road in Pretoria, South Africa, but all three passengers escaped unhurt.

On board were a pilot, an instructor and a civil aviation official.

"Three men escaped serious injury this afternoon following a helicopter crash on Marija Street in Sinoville. ER24 paramedics arrived on the scene at 12h40 to find a small helicopter lying on its side in the middle of the road. Three men were found nearby," ER24 said.

"Local authorities and Fire Services closed off the road while medics assessed the patients. Fortunately, all three men escaped serious injury and declined transportation to a nearby hospital. The exact details surrounding this incident are not yet known but local authorities were on the scene for further investigations."

The South African Civil Aviation Authority said it will investigate the incident.