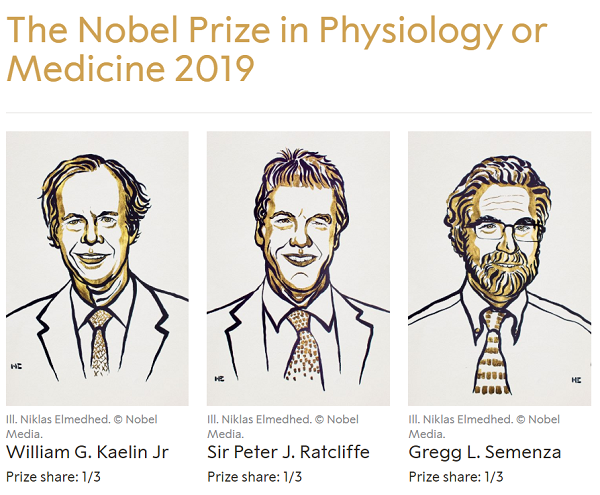 The prize was awarded jointly to William G. Kaelin Jr, Peter J. Ratcliffe and Gregg L. Semenza "for their discoveries of how cells sense and adapt to oxygen availability," said the Nobel Assembly at the Karolinska Institute.

The three 2019 Medicine laureates have identified molecular machinery that regulates the activity of genes in response to varying levels of oxygen, the committee said.

Thomas Perlmann, secretary-general of the Nobel Committee and the Nobel Assembly, told a press conference that he was able to reach all three laureates, and they were "really happy, almost speechless and happy to share the prize."

Oxygen sensing is central to many diseases. The discoveries made by this year's laureates have fundamental importance for physiology and have paved the way for promising new strategies to fight anemia, cancer and many other diseases, the committee said.

This year's prize is 9 million Swedish krona (about 1 million U.S. dollars), which will be equally shared among the three laureates.