Three US officers charged with killing of Black man in custody

Two officers in the US state of Washington were charged with the murder of a Black man who died in police custody as he pleaded that he couldn't breathe, and a third was charged with manslaughter, prosecutors said Thursday. 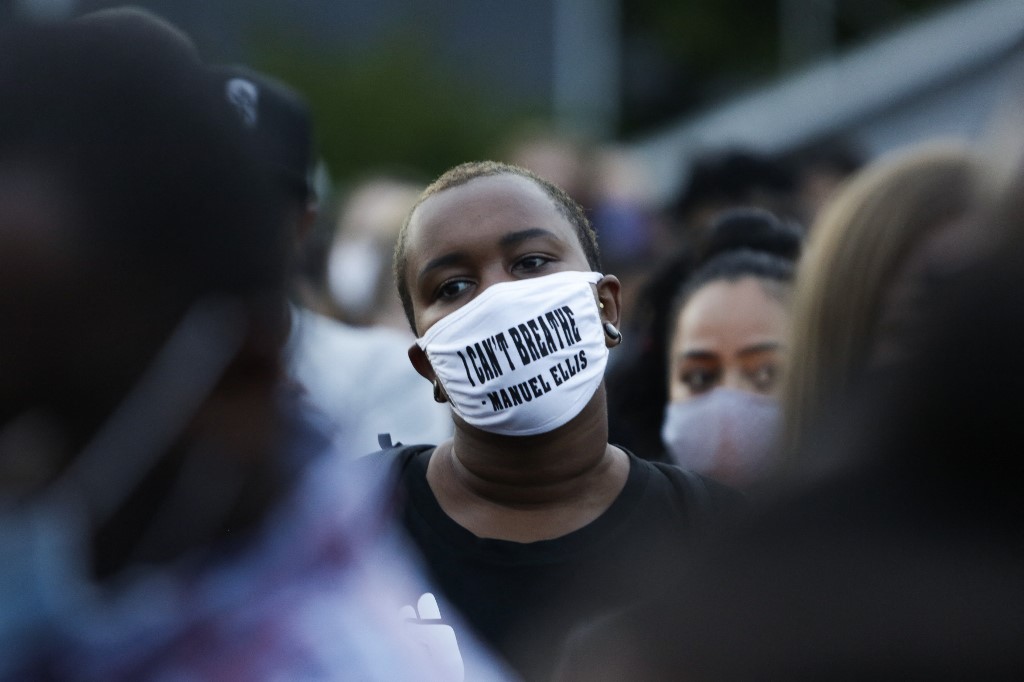 A man attending a vigil wears a mask with the words "I can't breathe" and the name of Manuel Ellis a 33-year-old black man who died in Tacoma Police custody on March 3 and was recently ruled a homicide, according to the Pierce County Medical Examiners Office, in Tacoma, Washington on June 3, 2020. (File photo: AFP)

Manuel Ellis died in Tacoma in March 2020, in a case that became a touchstone for protests in the Pacific Northwest, and which bears similarities to the killing of George Floyd by Minnesota police that sparked nationwide outrage two months later.

Ellis died after "felonious assault and/or unlawful imprisonment" by two of the officers, while a third "continued to hold Ellis in the prone position and to apply pressure onto his back" despite hearing Ellis say he could not breathe, a prosecutor statement says.

Washington Governor Jay Inslee ordered a new, state-led investigation into the death last June -- at the height of countrywide protests over Floyd's killing -- after surveillance footage and witnesses contradicted the officers' account of the incident.

By that stage the county's medical examiner had ruled the death a homicide caused by hypoxia -- a lack of oxygen -- due to physical restraint. The same examiner later found that methamphetamine in Ellis' blood was unlikely to have contributed to his death.

"This is the first step in our system of justice," said Inslee in a statement Thursday.

"We must remain proactive -- from those of us in elected office to those providing services in our communities –- to turn the tide of injustice," he added.

Ellis, 33, had gone out for a late-night snack on the night of March 3, 2020, and was returning home with a bag of donuts when he approached a patrol car containing officers Christopher Burbank and Matthew Collins.

Burbank and Collins would later claim Ellis randomly attacked them after they spotted him trying to open the door of another car at an intersection.

But three civilian witnesses and video footage from their cellphones and a doorbell camera nearby contradict these claims and offer no evidence of Ellis being the aggressor, according to the state investigation.

Burbank and Collins -- who Tasered Ellis and placed him in a chokehold -- were charged with second-degree murder, while another officer who arrived later to the scene and knelt on Ellis's back until paramedics arrived was charged with first-degree manslaughter.

If convicted, the maximum sentence in all three cases is life in prison. Warrants have been issued for their arrests.

Ellis' death has sparked protests in Tacoma, about 35 miles south of Seattle, and led to Washington state banning the use of chokeholds.

Unlawful killing charges against police have been extremely rare in Washington state and across much of the US.

Minnesota police officer Derek Chauvin was convicted of murder and manslaughter in April for Floyd's death.

Since that verdict, two police officers have since been indicted for murder and a third convicted by an Alabama jury for shooting a suicidal man.