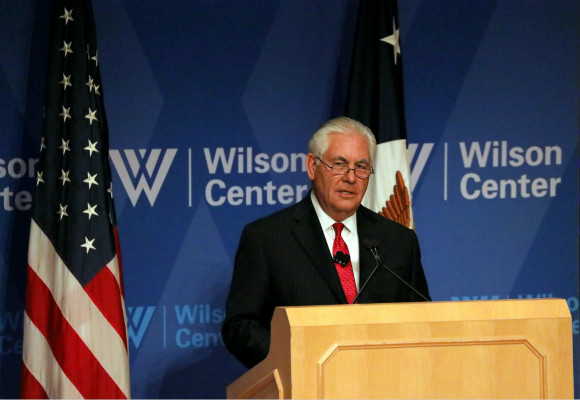 US Secretary of State Rex Tillerson speaks at the Wilson Center on November 28. (Photo: Gao Shi)

In a speech on November 28 at the Wilson Center, a Washington think tank, US Secretary of State Rex Tillerson reiterated Washington’s commitment to European security.

Tillerson said the US would be the first to respond to any attack on a European ally under NATO’s Article 5 mutual defense clause. He noted that Washington would never forget how NATO had “stood with us” after the terror attacks on September 11, 2001.

During the speech, Tillerson accused Russia of pursuing policies to “drive apart” the US and its European allies.

“While the West continues to seek a productive new relationship with post-Soviet Russia, thus far it has proved elusive.” Tillerson said, stressing that enhancing European energy security is crucial as Russia had used energy as a “weapon.”

Tillerson also defended his management of the US State Department in his speech after criticism from former diplomats, lawmakers, academics and others mounted, accusing him of intentionally dismantling the State Department for political reasons.

“I am offended on their behalf that somehow we don't have a State Department that works,” Tillerson said,“So there is no hollowing out. These numbers that people are throwing around are just false. They’re wrong.”

He also said he was “stunned” to discover he had 82 direct-report employees, which caused him to push forward the redesign scheme.“It was a 60 percent reduction. It sounded like the sky was falling,” Tillerson said, noting the department is “very selective” in choosing individuals for the roles.