WORLD Tillerson's Mideast aim is a Saudi-Iraqi axis against Iran

Tillerson's Mideast aim is a Saudi-Iraqi axis against Iran 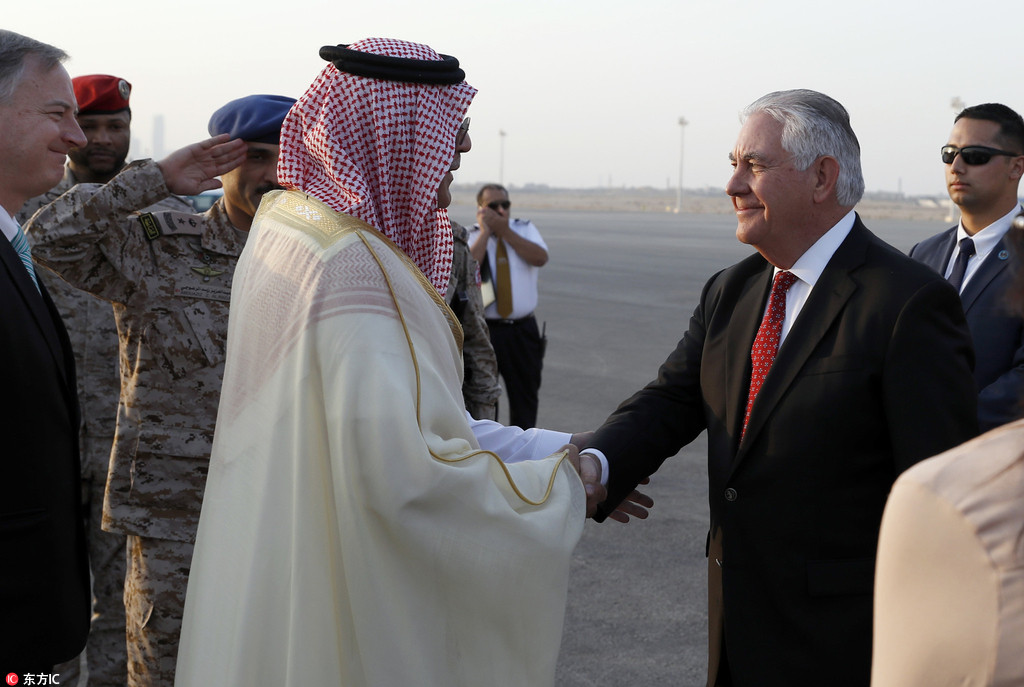 Secretary of State Rex Tillerson (second from right) is greeted as he arrives at King Salman Air Base on October 21 in Riyadh, Saudi Arabia. (File Photo/IC)

As US Secretary of State Rex Tillerson visits the Middle East this weekend, he'll hope to achieve something that has eluded top American diplomats for a generation: sealing a new alliance between Saudi Arabia and Iraq that would shut the doors of the Arab world to neighboring Iran.

While the US strives to heal the rift between the Gulf Arab states and Qatar, and resolve civil wars in Yemen and Syria, Tillerson is the Trump administration's point man on an even more ambitious and perhaps even less likely geopolitical gambit.

US officials see a new axis that unites Riyadh and Baghdad as central to countering Iran's growing influence from the Persian Gulf to the Mediterranean Sea, particularly as the Iraqi government struggles to rebuild recently liberated Islamic State strongholds and confronts a newly assertive Kurdish independence movement.

History, religion and lots of politics stand in Tillerson's way. He arrived in Riyadh on Saturday and planned to visit Qatar on Monday.

The effort to wean Iraq from Iran and bond it to Saudi Arabia isn't new, but US officials are optimistically pointing to a surer footing they believe they have seen in recent months. They are hoping to push the improved relations into a more advanced phase Sunday when Tillerson participates in the inaugural meeting of the Saudi Arabia-Iraq Coordination Committee in Riyadh.

Tillerson will seek Saudi financial generosity and political support for Iraq, its embattled northern neighbor. Two US officials said Tillerson hopes the oil-rich Saudis will contribute to the massive reconstruction projects needed to restore pre-IS life in Iraqi cities such as Mosul and lend their backing to Iraqi Prime Minister Haider al-Abadi. He is treading delicately among a host of powerful countries on Iraq's borders which are increasingly trying to shape the future of the ethnically and religiously divided nation.

The officials spoke on condition of anonymity because they weren't authorized to publicly preview Tillerson's plans.

Shiite-majority Iraq and Sunni-led Saudi Arabia, estranged for decades after Saddam Hussein's 1990 invasion of Kuwait, have tried in recent years to bridge their differences.

Nevertheless, the relationship is still plagued by suspicion.

Saudi Arabia reopened its embassy in Baghdad in 2015 after a quarter-century, and earlier this year unblocked long-closed border crossings. But the emergence of arch-Saudi rival Iran as a power player in Iraq continues to gnaw at Riyadh and Washington.

US President Donald Trump wants to see "a stable Iraq, but a stable Iraq that is not aligned with Iran," H.R. McMaster, his national security adviser, said this past week. He suggested Saudi Arabia could play a pivotal role.

The US view is that the alternative may mean more conflict in Iraq, which endured years of insurgency after the US-led 2003 invasion and ethnic warfare when the Islamic State group rampaged across the country in 2014.

"Iran is very good at pitting communities against each other," McMaster said Thursday at the Foundation for Defense of Democracies. "This is something they share with groups like ISIS, with al-Qaida. They pit communities against each other because they use tribal and ethnic and sectarian conflicts to gain influence by portraying themselves as a patron or protector of one of the parties in the conflict and then they use that invitation to come in and to help to advance their agenda and, in Iran's case, I think is a hegemonic design."

Trump and his national security team have framed much of the Middle East security agenda around counteracting Iran, which they see as a malign influence that poses an existential threat to Israel and other American allies and partners in the region. They also accuse Iran of menacing the US and its interests at home and elsewhere in the world.

Shortly after taking office, Tillerson identified improving Saudi-Iraqi ties as a priority in the administration's broader policy to confront and contain Iran. Officials say he has devoted himself to the effort.

On his second official trip abroad, Tillerson in February canceled a planned "meet and greet" with staffers at the US Embassy in Mexico City to focus on the matter, according to one of the US officials.

Tillerson's decision to skip that gathering was widely criticized at the time as a sign of disengagement with his employees, but the official said Tillerson adjusted plans to speak by secure telephone to Saudi Foreign Minister Adel al-Jubeir on the Iraq rapprochement.

Tillerson, according to the official, implored al-Jubeir to visit Baghdad as a sign of Saudi goodwill and commitment to the effort to defeat IS, which then still held about half of Mosul.

Al-Jubeir agreed. Two days later, he made a surprise trip to the Iraqi capital. He was the first Saudi foreign minister to do so in 27 years.