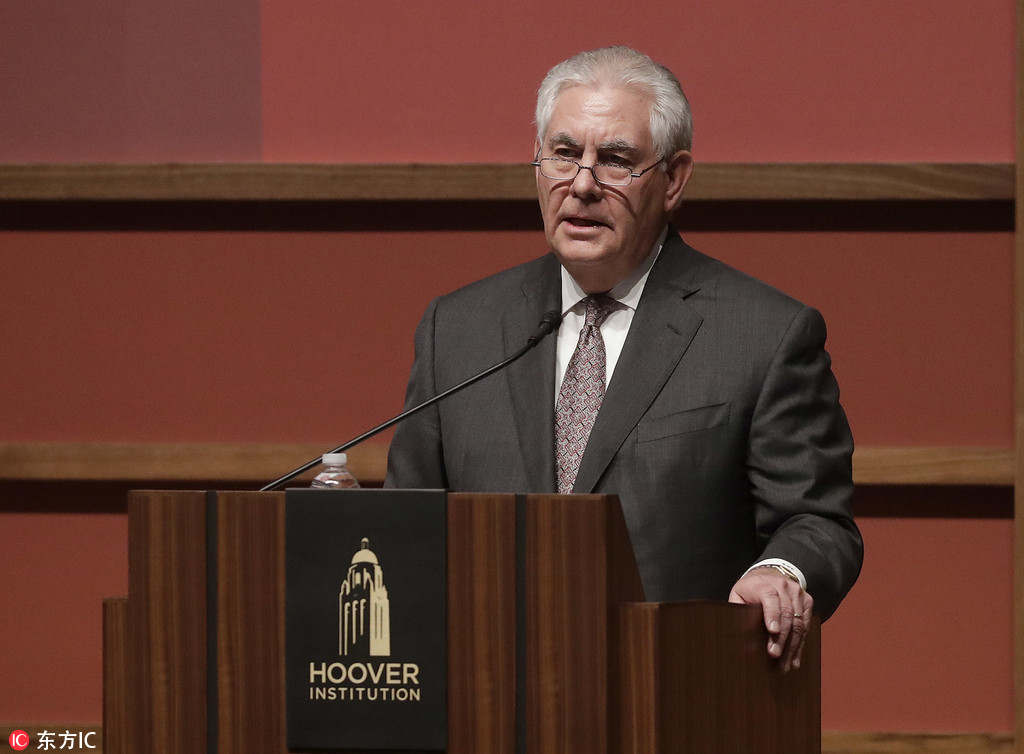 U.S. Secretary of State Rex Tillerson said Wednesday that the United States will keep its military presence in Syria."It is crucial to our national defense to maintain a military and diplomatic presence in Syria," Tillerson said in a speech on the Syria issue delivered at Hoover Institute at Stanford University, California.Nearly all territory in Iraq and Syria once controlled by the Islamic State (IS) has been liberated, and the IS has not been able to regain one foot of that ground, Tillerson said in the speech which was released by the U.S. State Department.However, the U.S. diplomatic chief noted that the radical group has not been completely defeated, and "the United States will continue to remain engaged as a means to protect our own national security interest."The United States will maintain a military presence in Syria focused on ensuring the IS cannot re-emerge, he said. "Our military mission in Syria will remain conditions-based. We cannot make the same mistakes that were made in 2011 when a premature departure from Iraq allowed al-Qaida in Iraq to survive and eventually morph into ISIS (IS) ... We cannot allow history to repeat itself in Syria," he said. The United States will keep a military presence in Syria until the full and complete defeat of the IS, he added.On the "ineffectiveness" of the previous U.S. efforts to halt the conflict in Syria, Tillerson said Washington will launch "stabilization initiatives" in liberated areas, such as clearing unexploded land mines left behind by the IS, among others. However, he said Washington and its allies "will not provide international reconstruction assistance to any area under control" of the Syrian government, and urged "all stakeholders in Syria's future to do the same."Tillerson also urged Russia to play a "meaningful" role in handling the Syria issue.The Washington-led anti-terror coalition been carrying out military operations in Syria since 2014, under the name of fighting against the IS militants, despite the Syrian government's accusation that the attacks were unauthorized by the UN Security Council and had led to huge civilian casualties. On Sunday, the U.S.-led coalition said that the United States was working to form a 30,000-strong border security force, which will be under the command of the Kurdish-led Syrian Democratic Forces (SDF), a U.S.- backed alliance of Kurds, Arabs, and Assyrians in northern Syria.  The situation in northern Syria and the growing influence of the Kurdish militia have raised the ire of the Syrian government, which has for long accused Washington of playing a destructive role in Syria.The Syrian government was concerned that the latest U.S. move to form a new army in northern Syria aims to fragment the country.Russia, Syrian government's main international ally, also expressed fears that the U.S. is "pursuing a policy to cut Syria into several pieces."Russia's Foreign Minister Sergey Lavrov said Monday that the United States did not intend to preserve Syria's sovereignty, accusing Washington of seeking to create a Kurdish-controlled entity along the Turkish and Iraqi border zones.