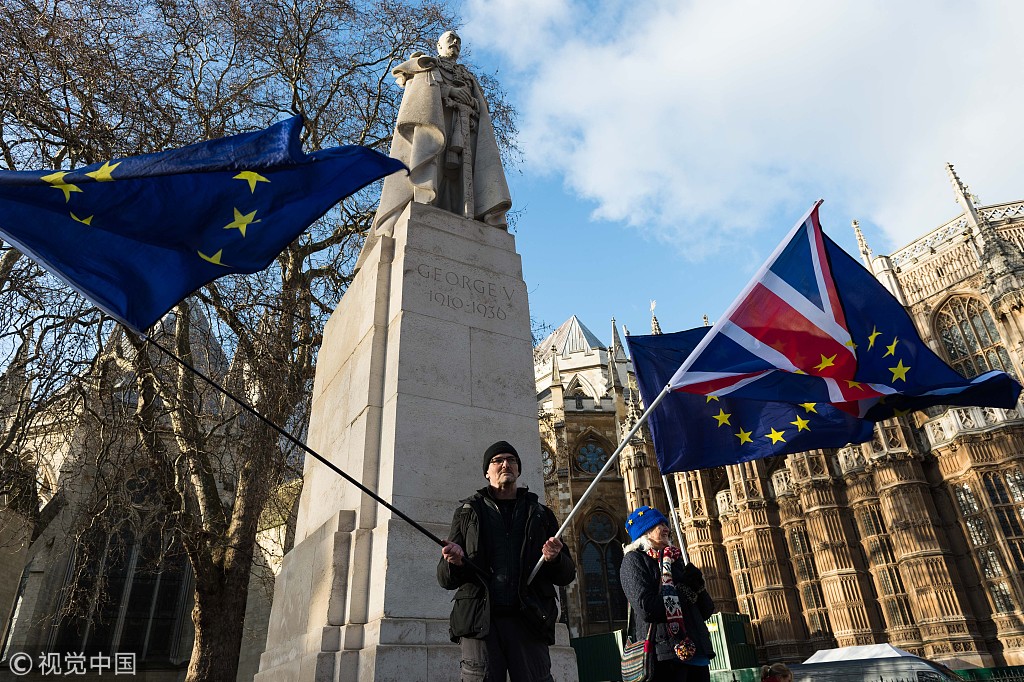 Photo taken on January 16, 2018 shows that a group of pro-EU supporters gather outside Parliament to protest against Brexit as the EU Withdrawal Bill returns to the Commons for debate in London, England. (File Photo: VCG)

Businesses urgently need decisions on to protect British jobs and growth, the head of the Confederation of British Industry (CBI) has warned in a message Sunday on Brexit.The CBI released a draft of a keynote speech Director General Carolyn Fairbairn is to make Monday at the University of Warwick in Central England.Fairbairn says 2018 must be the year of hard choices, based on evidence not ideology, in a message targeted at politicians negotiating Britain's departure from the European Union.Fairbairn will call for a status quo, jobs-first transition deal to be nailed down in the next 70 days to remove the cliff edge for firms."A united UK view is needed by April - allowing talks to begin that month and unambiguous heads of terms agreed with the EU by October," she says.Urging rapid agreement on the shape of a new deal, the leader of Britain's biggest business organisations suggests neither the Canada nor Norway models have with the EU represent the best solution for business or for Britain.The Canada model, she says, "is an ocean away from what we need. We can't afford higher barriers to trade, and nor can the EU," adding "the Canada-deal rules of origin are as long as The Lion the Witch and the Wardrobe, and a lot less fun to read."To achieve a good Brexit both sets of negotiators must revisit red lines, putting economics before politics to protect jobs and communities on both sides of the Channel, her message continues.Fairbairn calls for a comprehensive customs union between the UK and the EU as a "practical, real-world answer" that goes a long way towards solving some of the complex issues, including the Irish border question, raised by the UK's exit from the EU.For the final deal urges negotiators to adopt a simple principle "start with the rules we already share, and move on from there. They have been 40 years in the making and support millions of jobs and communities across the UK and Europe."Concluding, Fairbairn stresses the urgency of the challenge, adding: "time is running out - by March next year our country will be out of the EU. Decisions must be taken fast, or firms will have no choice but to trigger their Plan Bs - more jobs and investment will leave our shores and future generations will pay the price."Fairbairn says Britain's global economy is booming and UK products and services are in demand the world over."We couldn't be better placed to be international leaders in the industries of the future - from tech and life sciences to advanced manufacturing and education. Yet while UK businesses are optimistic, they are also deeply apprehensive," she saysBusinesses are not looking for a referendum re-run, but do need a good Brexit deal to keep investing and creating jobs, she concludes."Firms warmly welcomed progress in December but January has brought a cold dose of reality. The EU is adamant the only options are existing models that don't serve either side. The UK team can't agree with itself, let alone with the EU. There's too much ideology, too little urgency," she says.