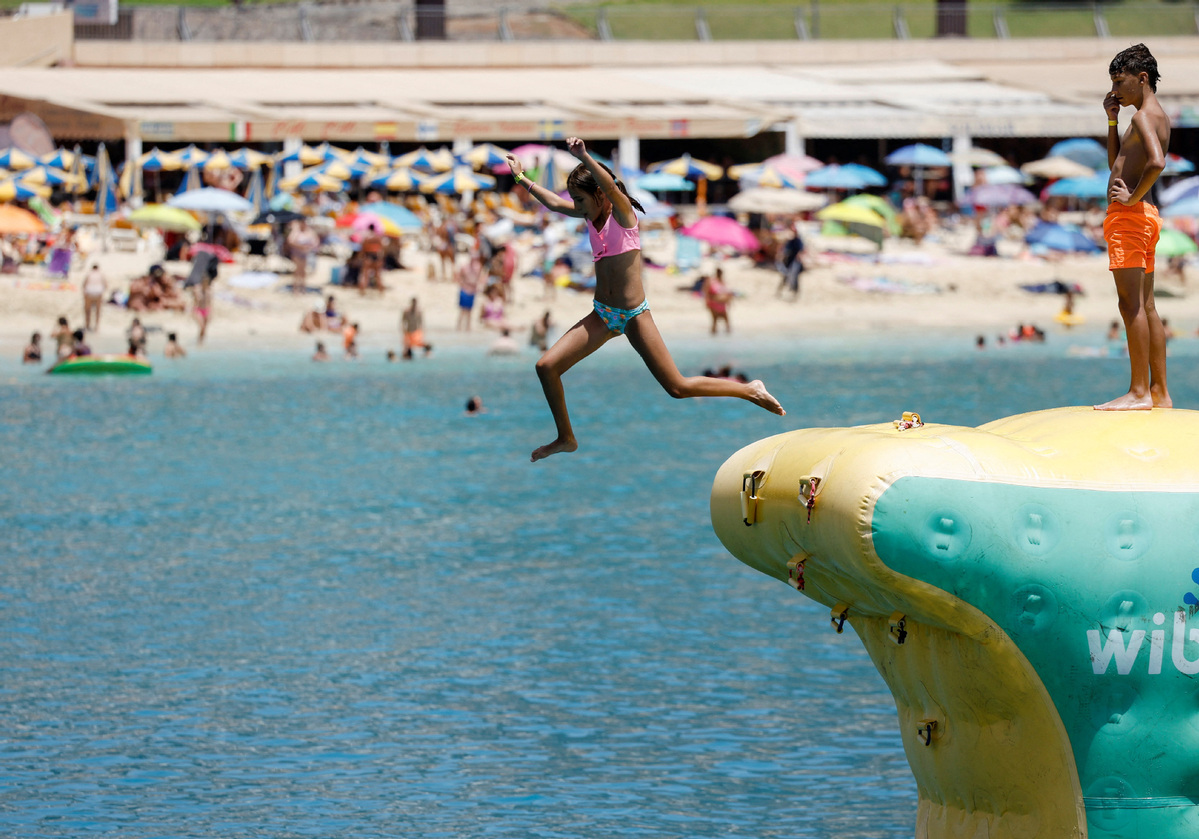 A girl jumps into the sea from an inflatable attraction during a hot summer day at Amadores beach, on the island of Gran Canaria, Spain, July 17, 2022. (Photo: Agencies)

As temperatures soar across Europe to unprecedented levels in the summer of 2022, spending time near water can be key to cooling down your body in a heatwave. However, just as with time spent in nature and green spaces, a growing body of research is showing that proximity to water can have a huge impact on your mental health, even more so than being in the countryside.

Our blue spaces are increasingly seen by medical professionals as powerful for our wellbeing, and the reasons for this are only now becoming clear.

City dwellers across the world have long sought refuge from the stresses of modern life in parks and the countryside, with the benefits to mental health often cited in medical literature. But the concept of blue spaces, such as coastlines and the sea, have slightly different connotations, one of travel and holiday, instead of quick post-work downtime.

However, blue spaces accessible to urbanites, such as rivers, lakes and even fountains, have also been shown to be beneficial. Being near any body of water is good for the mind and body, with particular focus on reducing stress levels.

Mental health is an urgent priority in urban areas across the world. According to the World Health Organization, or WHO, mental health is defined as the state of complete physical, mental and social well-being and not merely the absence of disease or infirmity. The WHO constitution continues to define mental health as a state of wellbeing in which a person can realize their abilities, and cope with the normal stresses of life and continue contributing towards their community. By these metrics, water has untapped potential in curing such ailments exacerbated by modern life.

Some of the reasons behind the power of blue spaces are relatively straightforward. Being near aquatic environments and outdoors in general leads to greater Vitamin D intake from the sun, and less polluted air. Also, those who live near water are more physically active, and not just through swimming or surfing.

People tend to enjoy walks along rivers, and a weekend cycle around a lake is more recreational than a cycle commute along busy roads. A phenomenon known as health by stealth, positive results often stem from people interacting with their environment through such activities, unwittingly gaining cardiovascular and muscle strengthening-benefits simply by enjoying their time outdoors. Whatever state the body is in, the mind usually follows.

But it is the innate psychological impact of blue spaces that is exciting the scientific community. A study led by researchers in the United Kingdom found that the sound of water and how it reflects light in unique patterns can have a restorative, calming effect on the brain. Larger bodies of water have a greater effect, and the ebb and flow of tides can reduce focus on negative distress, a transition from internal thought patterns to the wider environment that places personal problems into perspective.

Being near the sea or a lake may even trigger innate evolutionary responses in our psyche.

Ancient humans would have associated coming across such areas with clean drinking water, food opportunities and a chance to cool down and escape the sun. These factors would have hugely increased survival chances of entire communities in preagricultural hunter-gatherer times, and this behavioral response will have been inherited by us all.

The relationship with water runs deep in the history of our species, and this universal truth crosses all cultural barriers, making the prescription of blue spaces a high priority for the WHO and governments around the world.

Whoever you are, regardless of background, a walk along a river or the sight of a coastline could tap into a deep and perhaps unrecognizable recognition of something soothing, and lessen the load of a hectic life just that little bit more.