Time to turn Brexit speeches into treaties, Juncker tells May 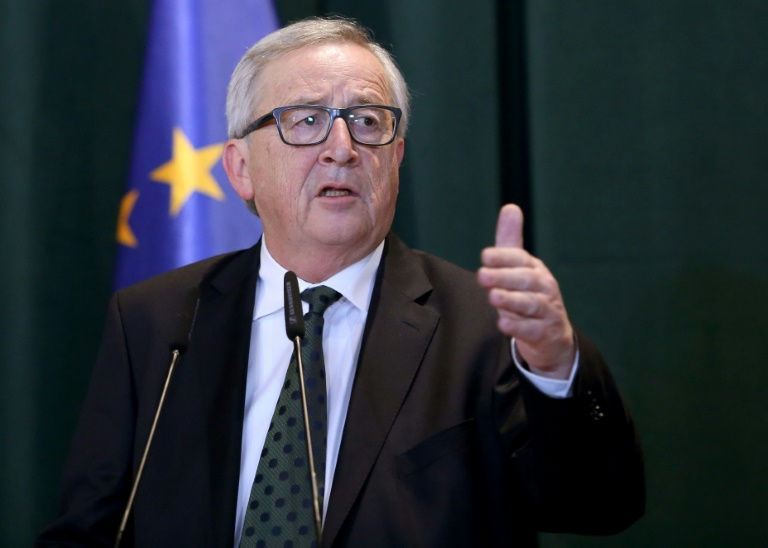 European Commission President Jean-Claude Juncker warned it was particularly crucial for the UK to clarify its plans for the sensitive issue of the Irish border (Photo: AFP)

Britain must "translate speeches into treaties" and come up with a detailed plan for its post-Brexit ties with the EU, European Commission President Jean-Claude Juncker said Tuesday.

EU leaders have been pressing British Prime Minister Theresa May to clarify what she wants before they agree their position on the future economic partnership at a summit later this month.

A series of speeches by May and her senior ministers have done little to satisfy Brussels, and Juncker warned it was particularly crucial for London to clarify its plans for the sensitive issue of the Irish border.

Heckled by eurosceptic British MEPs while he was speaking, Juncker told them a time would come when "you will regret your decision" to leave the bloc.

"As the clock counts down with one year to go, it is now time to translate speeches into treaties, to turn commitments into agreements, broad suggestions and wishes on the future relationship into specific workable solutions," Juncker told the European Parliament in Strasbourg.

He said it was "especially important" that Britain comes up with concrete proposals for the border between British-ruled Northern Ireland and the Republic of Ireland, which is staying in the EU.

Both Britain and the EU have vowed to avoid the return of customs checks to the border and an interim deal in December left some flexibility on the issue, but an EU text putting the agreement into law has sparked a fresh row with London.

The draft EU text published last month says Northern Ireland must stay in a customs union with the rest of the bloc if no better way is found to avoid a hard Irish border -- which Britain rejects.

Juncker told MEPs the draft text simply translated the December accord into legal language and "should not come as a shock".

And the former Luxembourg PM warned London the EU institutions and member states stood squarely in support of Ireland on the issue.

"For us this is not an Irish issue, it is a European issue. It is all for one and one for all -- that is what it means to be part of this union," he said.

EU Council President Donald Tusk warned last week that the Irish border issue must be solved before negotiations can move on to other issues.

Britain hopes to begin talks on the future trading relationship with Brussels next month, and May set out her proposals for a new wide-ranging free trade agreement in a speech on March 2.

In the speech May suggested Britain would commit to keeping some EU regulations and standards while reserving the option to diverge in others.

The bloc has repeatedly dismissed such an idea as "cherry-picking" and EU chief Brexit negotiator Michel Barnier once again rejected on Tuesday.

"It's a rather surprising idea to think the EU 27... could accept convergence when the UK wants it and at the same time leave the possibility for divergence where there is a comparative advantage to be had," Barnier told MEPs.

He also dismissed British suggestions they could take part in EU agencies after Brexit without submitting to rulings by the European Court of Justice.

The European Parliament -- which will have the final veto on any Brexit deal -- will vote on Wednesday on a proposal to offer Britain an "association agreement" which it says would be broader than a trade deal.

The agreement would be based around four "pillars" -- trade, foreign policy and security cooperation, internal security and "thematic" cooperation, which includes education and research programmes.

The European Parliament's Brexit coordinator Guy Verhofstadt said talks he held with May and her Brexit minister David Davis last week had left him confident London would "see the advantages of such an approach".

An association agreement would give "a vision, an architecture" to post-Brexit relations and avoid a repetition of the complex web of individual agreements the EU has with Switzerland.