WORLD Tokyo 2020 Paralympic Games open with hope on the horizon

Tokyo 2020 Paralympic Games open with hope on the horizon 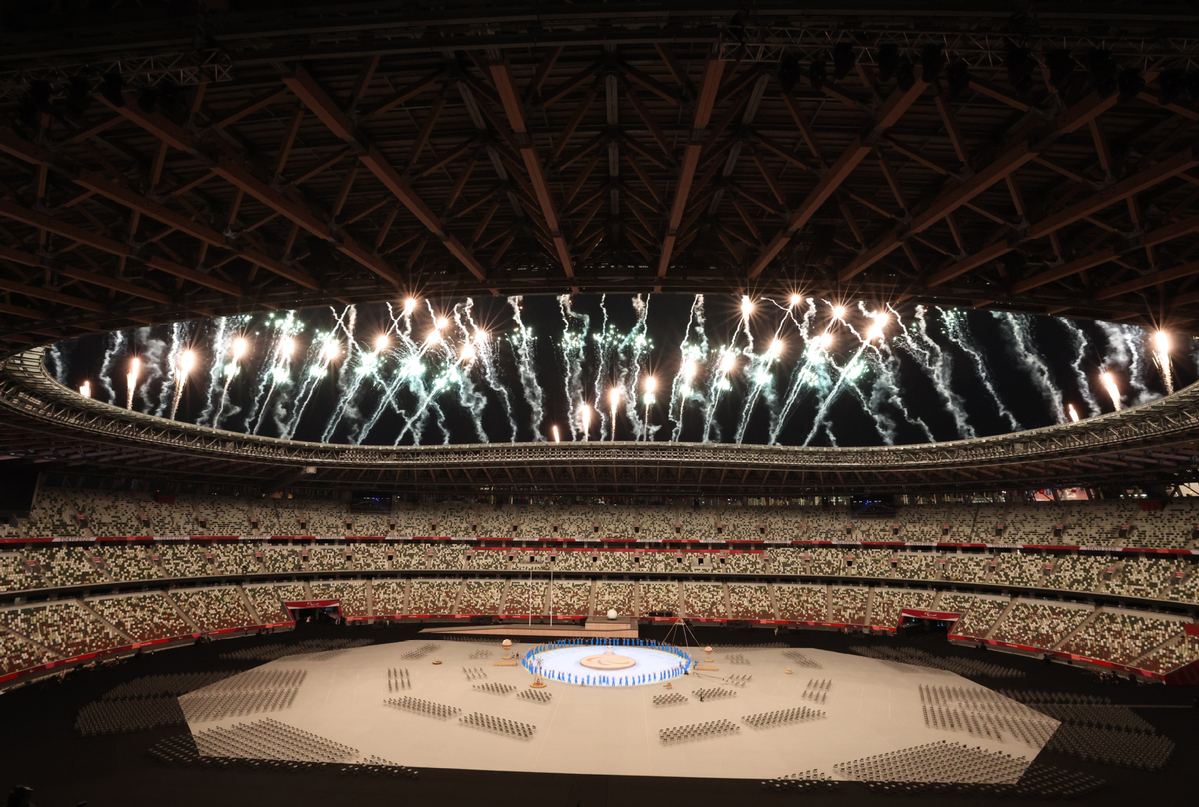 Fireworks are seen during the opening ceremony of the Tokyo 2020 Paralympic Games, on Aug 24, 2021 in Tokyo, Japan. (Photo: Agencies)

Despite not competing at the Tokyo Games, the Afghanistan flag still appeared along with the other 161 delegations as a sign of solidarity.

China, which is participating in the Summer Paralympics for the 10th consecutive time, has sent a delegation of 251 athletes, 132 female and 119 male, with the oldest athlete being 56 years old and the youngest 16 years old. They will compete in 20 of the 22 sports.

Leading a group of 150 people participating in the opening ceremony, Paralympians Zhou Jiamin and Wang Hao served as the flag bearers as the Chinese delegation marched on the center stage in the 98th.

With badminton and taekwondo being introduced for the first time in the Paralympic history, a record number of 4,403 athletes from 162 delegations have been confirmed to take part across 22 sports.

Due to the surging COVID-19 infections in the country, Tokyo and three other prefectures which will host the upcoming competitions are now under a state of emergency running until September 12.

As the only city hosting the Paralympic Summer Games for a second time in history, Tokyo has "an opportunity to build a society where everyone is free to live as who they are in mutual support and understanding, free from discrimination or barriers of any kind", said Seiko Hashimoto, president of the Tokyo 2020 Organising Committee (TOCOG).

Hashimoto expressed her gratitude and respect to all athletes, saying: "thank you for your hard work, dedication and perseverance in the face of the pandemic's many challenges to gather here in Tokyo."

"Para-athletes testify to our infinite potential as human beings, and to our power to go beyond our limits," Hashimoto said. "Please give us hope and the strength to stand tall as we witness all you have overcome to reach this stage."

Hashimoto also reassured to "take all possible measures to prevent COVID-19 and ensure a safe and secure Games," as all Paralympic athletes will be subject to the COVID-19 control rules, including daily testing, mandatory mask-wearing and limits on their movement.

Despite the pandemic, the 2020 Tokyo Olympic and Paralympic Games have been a challenge for all but also an opportunity for change like never before.

"We at Tokyo 2020 will do everything in our power to make these Paralympic Games a celebration of all that para athletes have achieved and an inspiration for true social change," the TOCOG chief said.

"When the Games were postponed last year, Paralympic athletes were beacons of hope," IPC president Andrew Parsons said. "Difference is a strength, not a weakness and as we build back better, the post-pandemic world must feature societies where opportunities exist for all."

"Thanks to the efforts of many, the most transformative sport event on Earth is about to begin," Parsons said.

"We want to change the entire world," Parsons added. "The Paralympic Games are for sure a platform for change. But only every four years is not enough. It is up to each and every one of us to play our part, every day, to make for a more inclusive society in our countries, in our cities, in our communities."

The Paralympic flame was relayed around the stadium as three past Paralympians passed it to three medical representatives, before three athletes finally lit the Paralympic cauldron with the cherry blossom motif, marking the pinnacle of the opening ceremony of the Tokyo 2020 Paralympic Games.