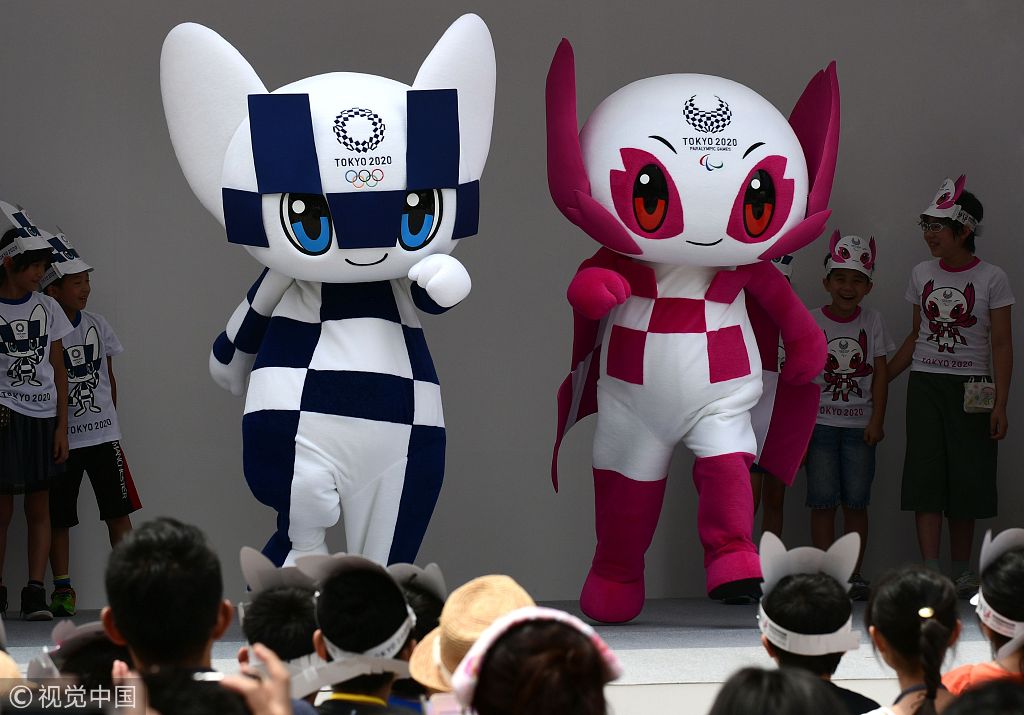 Mascots for the Tokyo 2020 Olympics Games Miraitowa (L) and Someity appear at their debut event in Tokyo on July 22, 2018. (Photo: VCG)

Japanese organisers formally introduced their doe-eyed 2020 Olympic mascots to the world on Sunday, christening them with superhero names that could provide a tongue-twisting challenge to some.

The blue-checked Olympic mascot was dubbed "Miraitowa" -- combining the Japanese words for future and eternity, organisers said at an event in Tokyo.

It expresses the hope for a bright future stretching off forever, according to officials.

Its Paralympic partner which sports pink checks is called "Someity" -- borrowing from the word for a variety of Japan's iconic cherry trees and the English expression "so mighty".

The characters are said to combine tradition and innovation, organisers said.

The pointy-eared mascots bestowed with "special powers" were unveiled in February this year after being chosen by schoolchildren from a shortlist of three across mascot-mad Japan.

Miraitowa has a "strong sense of justice and is very athletic," according to Olympic officials, adding that it also possesses magical powers that enable it "to move anywhere instantaneously".

Someity is said to be "usually calm" but "gets very powerful when needed," organisers noted cryptically.

Mascots are massive in Japan, where there are literally thousands representing everything from small communities to prisons.

Known locally as "yuru-kyara" or "laid-back characters," mascots can also be major money-spinners.

Tokyo organisers will hope their 2020 mascots can replicate the success of Soohorang, the cuddly stuffed tiger from the Winter Olympics in Pyeongchang earlier this year.

At their unveiling in February, social media reaction was mixed with some posters complaining they wanted something "more round" and more "huggable."