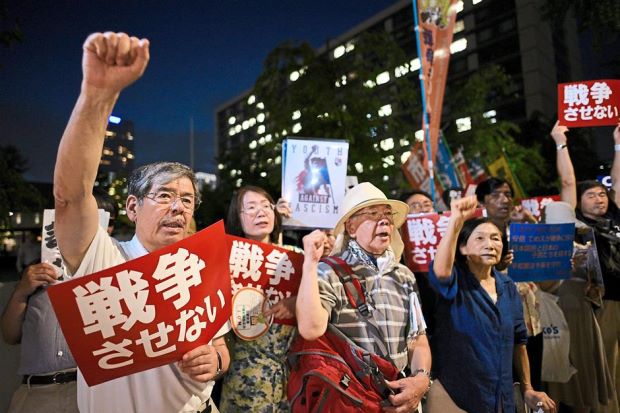 Thousands of Japanese people protested in Tokyo on Sunday over the summit their Prime Minister Shinzo Abe and visiting US President Donald Trump will have on Monday.

Trump arrived at the US Yokota Air Base on the outskirts of the Japanese capital on Sunday.

Abe has reiterated his full backing for Trump's policy of putting all options, including military ones, on the table in dealing with the DPRK, which is expected to top the agenda of the two leaders' talks.

Addressing a crowd of US and Japanese troops at Yokota, Trump called Japan a "crucial ally" and warned adversaries not to test US resolve. He said the US dominates the sky, the sea and the land.

Trump said the US will "partner with friends and allies to pursue a free and open Indo-Pacific region" during his trip.

Before leaving his office to meet Trump at a golf course, Abe said he hoped to cement the bilateral alliance during the US leader's "historic visit".

In their talks on Monday, Abe and Trump are likely to reconfirm their shared stance of applying the maximum possible pressure on the DPRK to compel it to abandon its nuclear and ballistic missile programs, Kyodo News said.

Sunday's protest in Tokyo was also against Abe's efforts to rewrite the Constitution. The Abe administration plans to add a clause on making explicit the status of the country's self-defense forces, as the Japanese military is known, to Article 9, which prohibits Japan from maintaining land, sea and air forces.

Around 40,000 people, including leaders of some Japanese opposition parties, protested against Abe's constitutional revision plans at the country's parliament building on Friday.

A Kyodo News poll showed on Thursday that 52.6 percent of the interviewees opposed Abe's proposal on changing the war-renouncing Article 9, while 38.3 percent were in favor.

During Trump's stay in Japan, more than 10,000 police are being mobilized, keeping the alert at the highest level. Lockers and garbage bins at airports have been sealed.

Trump will meet Japanese Emperor Akihito and Empress Michiko on Monday ahead of his talks with Abe.

Tokyo is the first leg of Trump's first visit to Asia since he was inaugurated in January. The trip will also take him to the Republic of Korea, China, Vietnam and the Philippines.