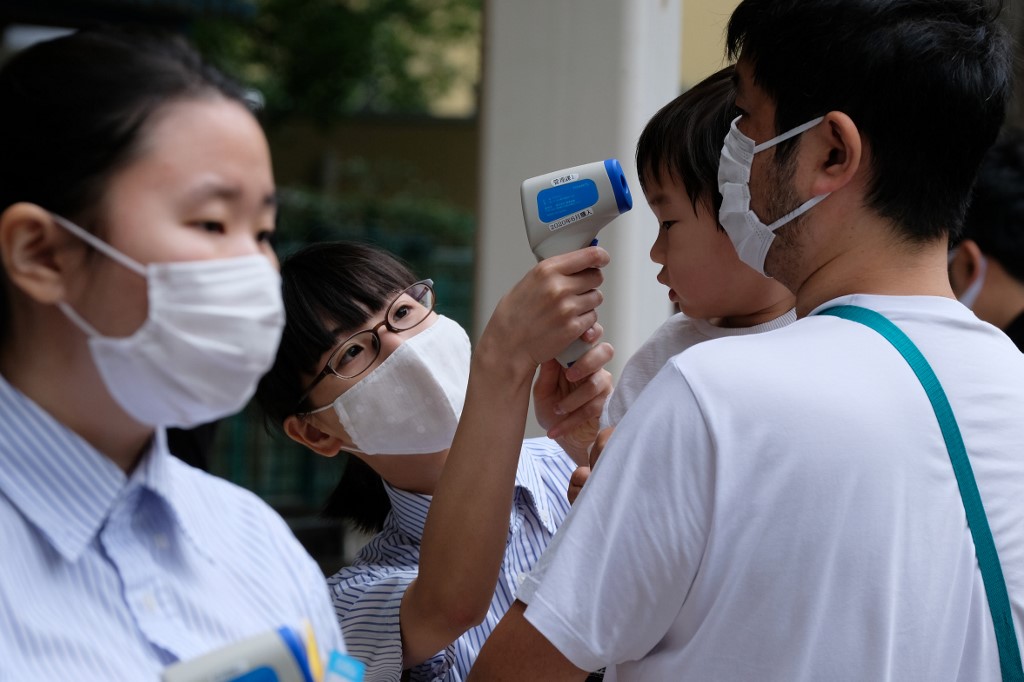 A worker checks the body temperature of visitors as a preventive measure against the COVID-19 coronavirus as they enter the Toshimaen amusement park in Tokyo on July 13, 2020. (Photo: AFP)

The latest record figure followed the previous day's record of 286, underscoring the metropolitan government's decision Wednesday to raise its virus alert level to the highest on its four-tier scale as infections are spreading.

Over the past seven days, the average daily figure of newly confirmed infections in the capital of 14 million people has topped 200.

Since the nationwide state of emergency was fully lifted on May 25, the capital has seen a resurgence of cases, with neighboring prefectures also seeing COVID-19 cases rise commensurate with Tokyo's.

Tokyo Governor Yuriko Koike said the increase in positive COVID-19 cases is due to increased testing to more than 4,000 a day.

The number of nationwide cases increased to a three-month high at 622 new cases on Thursday, official figures showed, marking the first time that daily cases have topped the 600-level since April.

Tokyo residents have been urged to refrain from making nonessential trips across prefectural borders in a bid to prevent the spread of the virus to other prefectures.

It has also requested that people do not visit nighttime entertainment spots that have not taken the necessary virus prevention measures.

Apart from infections at Tokyo's downtown nighttime entertainment districts, the city has also been dealing with concerns over localized infection clusters at a theater in Shinjuku Ward, welfare centers as well as nurseries.

Japan is also lumbered with rising numbers of COVID-19 infections on U.S. military bases in Japan's southernmost prefecture of Okinawa, as it is afraid that the virus will be passed on from the military to local Okinawans.

Okinawa Governor Denny Tamaki asked the U.S. side to clarify whether they are taking necessary virus prevention measures, including two-week quarantine procedures.

Tamaki has called for the Japan-U.S. Status of Forces Agreement (SOFA) to be reviewed as U.S. military personnel are exempt from Japan's quarantine rules and travel bans.

One local elderly taxi driver has already tested positive for the pneumonia-causing virus after driving U.S. military passengers, according to local media.