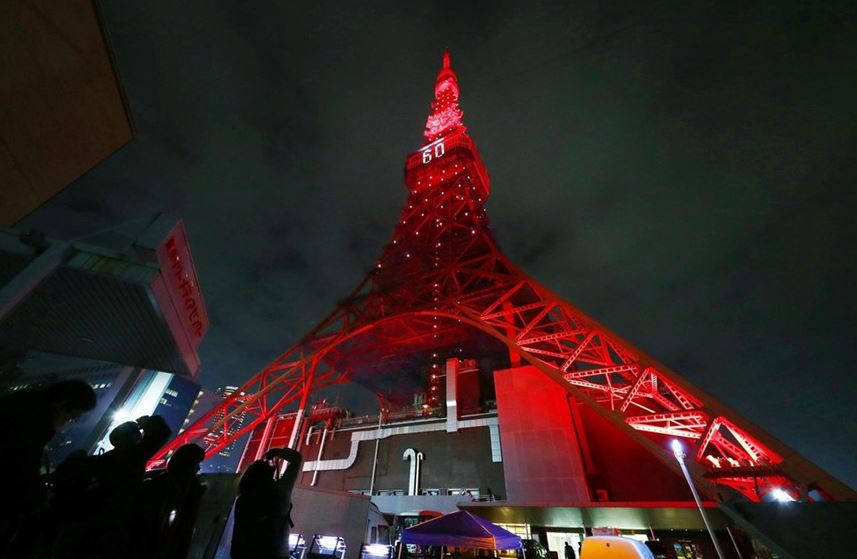 Tokyo Tower will be lit up in red using 36 big spotlights to celebrate Chinese New Year for the first time on February 4, 2019. (Photo: China Daily)

TOKYO, Feb. 4 (Xinhua) -- As the Chinese people cheer for the Lunar New Year Eve, the iconic scenic spot of Tokyo Tower in the Japanese capital was lit up Monday evening in Chinese red as a symbol of promotion of China-Japan relations.

The famous tourist attraction was dressed in Chinese red for the first time.

A video from Japanese Prime Minister Shinzo Abe was played to express his greetings to the Chinese people residing in Japan, the first time an incumbent Japanese prime minister sends the Chinese Lunar New Year greetings through a video.

"Happy Chinese New Year," Abe said in Chinese at the beginning of the video. He went on to say "Last year was an important year in the history of Japan-China relations."

The Japanese prime minister said that Japan welcomed a record high number of more than 8.3 million Chinese visitors in 2018 and the direct exchanges between the two peoples play a vital role in deepening mutual understanding and trust between the two countries.

Abe said he sincerely welcomes more Chinese friends to visit Japan and also hopes more Japanese will go to China and build a bridge for exchanges.

Speaking at the lighting ceremony, Chinese Ambassador to Japan Cheng Yonghua hoped for the further development of China-Japan relations.

He said that the lighting of Chinese red not only expresses sincere greetings from the Chinese residents in Japan to their fellow people in China, but also conveys Japanese people's festival greetings and good wishes to the Chinese people.

It also means China-Japan relations will make further progress and gain new developments in the new year, the ambassador said.

More than 500 hundred children from both China and Japan set off balloons at the ceremony, while activities such as traditional lantern show and lion dancing performance brought a festive atmosphere to the Tokyo Tower.