Told to leave, IS 'caliphate' holdouts in Syria stay devoted 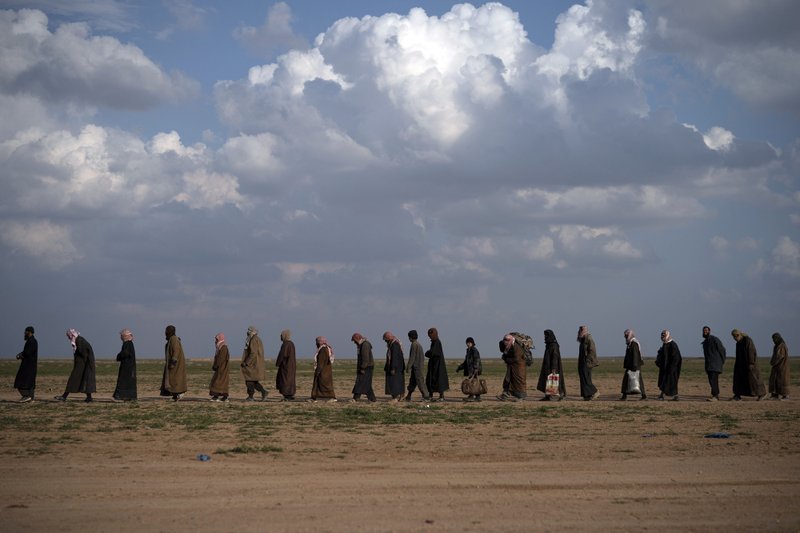 They were living in holes in the ground, with only dry flatbread to eat at the end. They had no clean water to drink, and no medical care for those wounded in an intense military campaign.

Yet, if it were not for the call from their leaders to leave, they would have stayed.

Such is the devotion of several hundred men, women and children who were evacuated Friday from the last speck of land controlled by the Islamic State group, a riverside pocket that sits on the edge of Syria and Iraq. Hundreds, if not thousands, more remain holed up in Baghouz — the last redoubt of the militants’ self-proclaimed caliphate that leaders once said would stretch to Rome.

They include militants, of course, but also their family members and other civilians who are among the group’s most determined supporters. Many of them traveled to Syria from all over the world. And they stuck around as the militants’ control crumbled.

“Baghouz maybe is the most difficult moments of all my life,” said 21-year-old Um Youssef, a Tunisian-French woman who came to Syria at 17 with her mother. Food was scarce and water was dirty, but despite that, she said, she had no regrets.

Um Youssef — which means mother of Youssef in Arabic — sent her two kids and her mother out of the pocket last month and stayed with her husband.

“I didn’t make Hijrah (migration) for the food, or for the good life,” she said. “It is jihad (holy war) for the sake of God.”

At least 36 flatbed trucks used for transporting sheep carried the disheveled, haggard crowd out of the territory to a desert area miles (kilometers) away for screening. They were the latest batch of evacuees from the territory following airstrikes and clashes meant to bring about the militants’ complete territorial defeat.

For now, the civilians are expected to be sent to a displaced people’s camp, while suspected fighters will go to detention facilities. Previous evacuations have already overwhelmed camps in northern Syria, and at least 60 people who left the shrinking territory have died of malnutrition or exhaustion.

In a dusty area surrounded by grass, women in black head-to-toe robes and children in dirty jackets — many of them crying for food — formed a line. Men wearing tattered headscarves formed another. Foreign men filed into a third.

One woman had given birth in one of the trucks. An old man was carried in a blanket by two others to the screening line. A young girl sat under the shade of the wheel of a truck looking dazed, while another moved between the crowds, asking for food.

It is impossible to know if all are wholeheartedly behind the militant group or how many expressed support out of fear of reprisals. But many vehemently defended IS, arguing the group was down but not out, and said they only left because of an order from the remaining religious leader in the area. Some referred to the wali, the provincial leader, while others said the order was from the group’s top leader, Abu Bakr al-Baghdadi, who is referred to as the “Caliph.”

It is not clear if IS leaders were in agreement. Amid the military pressure, reports have emerged of disagreements among them. Monitoring group the Syrian Observatory for Human Rights said one IS leader was beheaded in recent days for urging civilians to leave.

All those interviewed gave nicknames or spoke on condition of anonymity because they feared for their safety. They spoke of the Caliphate as the “glory” of Islam where they said resources were plentiful and “God’s rule” would be the law of the land.

It was hard to see how that could be from the hills overlooking Baghouz. A four-year international campaign has reduced the self-proclaimed caliphate — which once sprawled over nearly a third of Syria and Iraq — to a tent encampment and a few homes in this village overlooking the Euphrates River.

An estimated 300 IS militants are besieged there, hemmed in by the river and the U.S-backed Syrian Democratic Forces, a Kurdish-led militia spearheading the fight against IS following an intense push since September. Thousands of civilians have also poured into the area.

The presence of so many civilians— and possibly senior members of the militant group — in Baghouz has surprised the SDF and slowed down the expected announcement of the extremist group’s territorial defeat.

Recapturing Baghouz would mark an end to the militants’ territorial rule, but few believe that will end the threat posed by an organization that still stages and inspires attacks through sleeper cells in both Syria and Iraq and that has active affiliates in Egypt, West Africa and elsewhere. The group also has a presence online, using social media to recruit new members and promote its attacks.

In the past few weeks, nearly 20,000 people have left Baghouz on foot through the humanitarian corridor, but the militants then closed the passage and no civilians left for a week until Wednesday, when a large group was evacuated.

Among those evacuated Friday was a group of 11 Yazidi children. Thousands from the Yazidi minority were kidnapped by IS in Iraq in 2014, and are still missing.

In the dusty clearing where the evacuees were being screened Friday, a 16-year-old mother of two from Aleppo said she has not had food for a couple of days, opting to feed her children instead.

A child said he has not showered in a month, and a woman from Tajikistan asked for a phone to call her mother. Frantic and in tears, a mother held out her pale and mothionless toddler, screaming for help. The cries of hungry children rang through the open desert as SDF officials searched the evacuees’ belongings.

But of over a dozen people interviewed by The Associated Press, only four said they didn’t want to be in Baghouz.

They described living in dug-up holes with hoisted tents to protect against airstrikes. Some said they initially had lentil soup, but then only green-brownish loaves of flatbread were available.

“We weren’t going to leave, but the Caliph said women should leave,” said Um Abdul-Aziz, a 33-year-old Syrian mother of five whose moniker means mother of Abdul-Aziz in Arabic. She was referring to IS leader al-Baghdadi. “I wanted to stay. It is an Islamic State. It is land of Islam.”

Her husband stayed behind to fight. “They thought if they let the women out, God may help them. May God help them,” she said.

A few were critical. “Order or no order, I wanted to get out,” said Aya Ibrahim, an Iraqi mother who said she was unable to secure medicine for her children. “Many families died from airstrikes. Many kids died from hunger.”

The 16-year old Syrian mother of two from Aleppo said she lost four husbands, her father, sister and two brothers. Um Mohammed — mother of Mohammed in Arabic — said the last days have been hard, with food prices soaring and intensive bombing campaigns keeping them in hiding.

Then the order came for them to leave.

Um Youssef, the French-Tunisian, said she has no plans or desire to return home in Tunisia, saying she would find her way to another Syrian city.

“Islamic State is over? Says who?” asked a 14-year-old Syrian girl who refused to give her name. “Wherever you go there is Islamic State.”