Officials say there are still 159 people unaccounted for after the partial collapse of a beachside building in Florida. 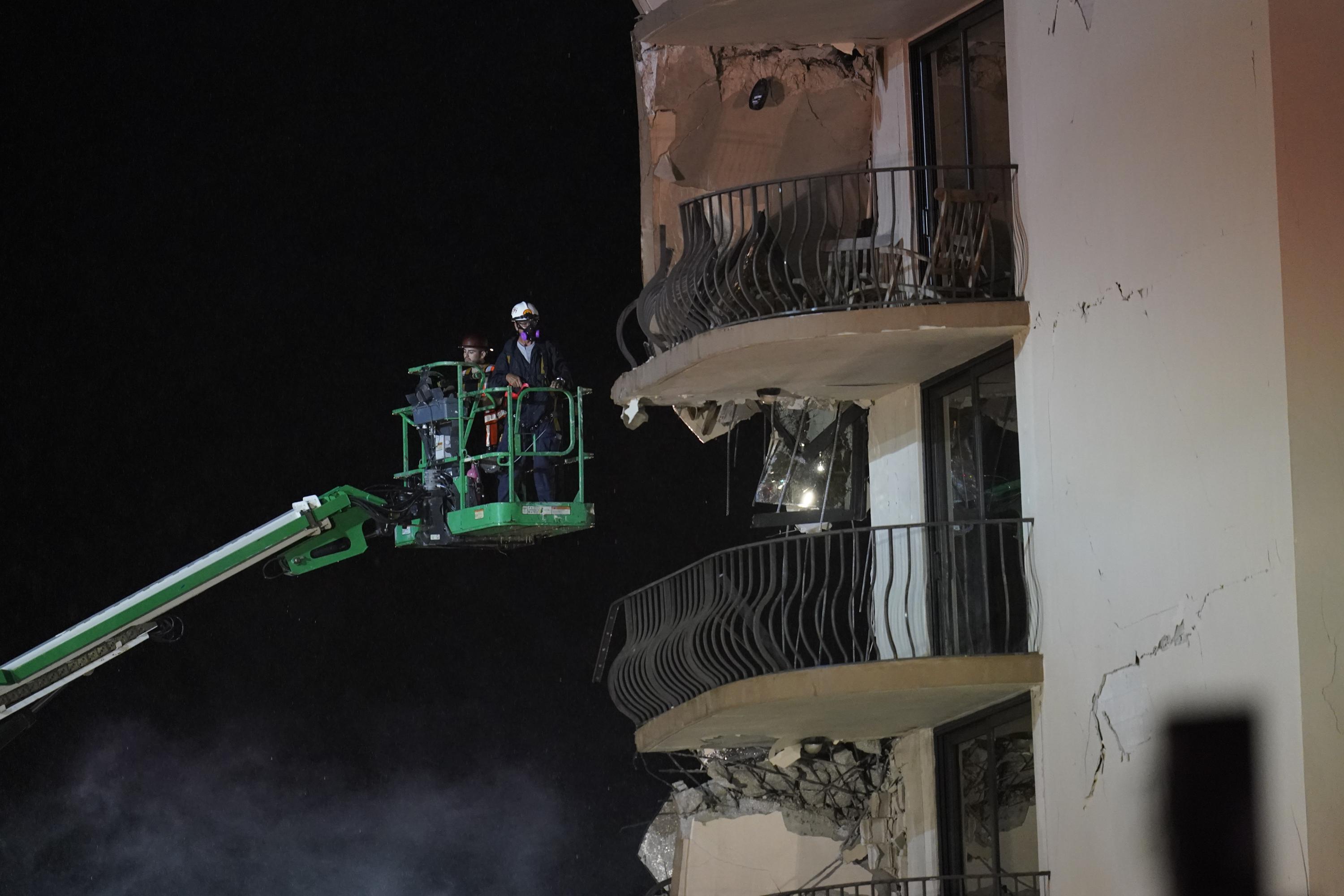 Workers use a lift to investigate balconies in the still-standing portion of the building, as rescue efforts continue where a wing of a 12-story beachfront condo building collapsed, late on Thursday, June 24, 2021, in the Surfside area of Miami. (Photo: AP)

Miami-Dade Mayor Daniella Levine Cava noted Friday that rescue officials were still searching for survivors from the condo building collapse in Surfside, saying that a search and rescue mission was ongoing.

Raide Jadallah, an assistant Miami-Dade County fire chief, said rescue operations continued throughout the night. He said that 130 firefighters are working at the site.

Miami-Dade Police Director Freddy Ramirez said they are working with the medical examiner's office to identify the four victims.

THIS IS A BREAKING NEWS UPDATE. AP's earlier story follows below.

SURFSIDE, Fla. (AP) — The Champlain Towers South drew people from around the globe to enjoy life on South Florida's Atlantic Coast, some for a night, some to live. A couple from Argentina and their young daughter. A beloved retired Miami-area teacher and his wife. Orthodox Jews from Russia. Israelis. The sister of Paraguay's first lady. Others from South America.

They were among the nearly 100 people who remained missing Friday morning, a day after the 12-story building collapsed into rubble early Thursday. Much of the Champlain's beach side sheared off for unknown reasons, pancaking into a pile of concrete and metal more than 30 feet (10 meters) high.

"These are very difficult times, and things are going to get more difficult as we move forward," Miami-Dade Police Director Freddy Ramirez said.

Fire Rescue personnel and others worked through the night in hopes of finding survivors.

State Sen. Jason Pizzo of Miami Beach told the Miami Herald he watched as tactical teams of six worked early Friday to sift through the debris. He said he saw one body taken in a yellow body bag and another that was marked. They were taken to a homicide unit tent that was set up along the beach.

Many people remained at the reunification center set up near the collapse site early Friday morning, awaiting results of DNA swabs that could help identify victims.

Officials said no cause for the collapse has been determined.

Video of the collapse showed the center of the building appearing to tumble down first and a section nearest to the ocean teetering and coming down seconds later, as a huge dust cloud swallowed the neighborhood.

About half the building's roughly 130 units were affected, and rescuers pulled at least 35 people from the wreckage in the first hours after the collapse.

Raide Jadallah, an assistant Miami-Dade County fire chief, said that while listening devices placed on and in the wreckage had picked up no voices, they had detected possible banging noises, giving rescuers hope some are alive. Rescuers were tunneling into the wreckage from below, going through the building's underground parking garage.

Personal belongings were evidence of shattered lives amid the wreckage of the Champlain, which was built in 1981 in Surfside, a small suburb north of Miami Beach. A children's bunk bed perched precariously on a top floor, bent but intact and apparently inches from falling into the rubble. A comforter lay on the edge of a lower floor. Televisions. Computers. Chairs.

Argentines Dr. Andres Galfrascoli, his husband, Fabian Nuñez, and their 6-year-old daughter, Sofia, had spent Wednesday night there at an apartment belonging to a friend, Nicolas Fernandez.

Galfrascoli, a Buenos Aires plastic surgeon, and Nuñez, a theater producer and accountant, had come to Florida to get away from a COVID-19 resurgence in Argentina and its strict lockdowns. They had worked hard to adopt Sofia, Fernandez said.

"Of all days, they chose the worst to stay there," Fernandez said. "I hope it's not the case, but if they die like this, that would be so unfair."

They weren't the only South Americans missing. Foreign ministries and consulates of four countries said 22 nationals were missing in the collapse: nine from Argentina, six from Paraguay, four from Venezuela and three from Uruguay.

The Paraguayans included Sophia López Moreira — the sister of first lady Silvana Abdo and sister-in-law of President Mario Abdo Benítez — and her family.

Israeli media said the country's consul general in Miami, Maor Elbaz, believes that 20 citizens of that country are missing.

Also missing was Arnie Notkin, a retired Miami-area elementary school physical education teacher, and his wife, Myriam. They lived on the third floor.

"Everyone's been posting, 'Oh my God, he was my coach,'" said Fortuna Smukler, a friend who turned to Facebook in hopes of finding someone who would report them safe.

"They were also such happy, joyful people. He always had a story to tell, and she always spoke so kindly of my mother," Smukler said. "Originally there were rumors that he had been found, but it was a case of mistaken identity. It would be a miracle if they're found alive."