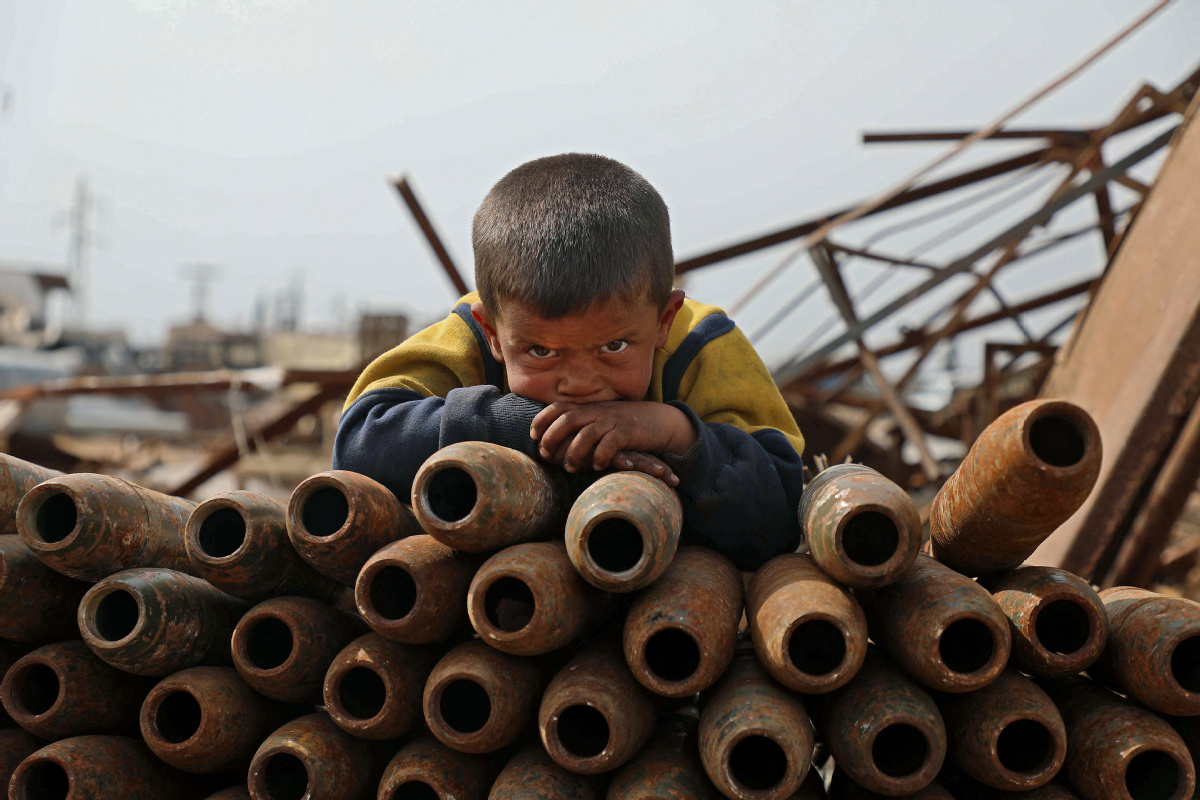 A boy peeps over a stack of neutralized shells at a scrapyard in a town in Syria's Idlib Province on Wednesday. The sale of scrap metal, including unexploded ordnance, helps sustain a family. (Photo: AFP)

BEIRUT－Syria's 10-year civil war has killed or wounded almost 12,000 children and left millions out of school in what could have repercussions for years in the country, the UN children's agency said on Wednesday.

The grim statistics were released in a UNICEF report ahead of the 10th anniversary of Syria's conflict, which began in mid-March 2011.

The war has killed nearly half a million people, wounded more than a million and displaced half the country's population, including more than 5 million as refugees.

Over the past year, the situation has been compounded by a severe economic and financial crisis and the spread of the coronavirus in the Middle Eastern country.

The reported numbers of children displaying symptoms of psychosocial distress doubled in 2020, as exposure to violence and trauma affected mental health, it said.

UNICEF said that in addition to the almost 12,000 children killed or injured in the past decade, according to verified data, more than 5,700 children－some as young as 7-years-old－were recruited into the fighting, the report added.

It also said that since the conflict began, more than 1,300 educational and medical facilities and personnel have come under attack.

"It is imperative that we continue to reach all Syrians in need of humanitarian assistance," the UN chief said at the news conference marking the 10th anniversary of the Syrian conflict at the UN headquarters in New York.

He warned that the situation "remains a living nightmare" in Syria.

Noting that some 60 percent of Syrians are at risk of hunger this year, Guterres said that more humanitarian access is needed.

UNICEF said that nearly 2.45 million children in Syria and an additional 750,000 Syrian children in neighboring countries are out of school. It said the situation for many children and families remains precarious, with nearly 90 percent of children needing humanitarian assistance－a 20 percent increase in the past year alone.

"This cannot be just another grim milestone, passing by in the world's peripheral vision as children and families in Syria continue to struggle," UNICEF Executive Director Henrietta Fore said.

She said the international community should make "every effort to bring about peace to Syria and galvanize support for its children".

Insurgents still control an area in Syria's northwest that is home to more than 3 million people, many of them internally displaced.

UNICEF said the situation in the northwest is alarming, with many families that have fled violence multiple times in search of safety. It said children have suffered through another long winter where many people living in tents and unfinished buildings battled severe weather, including torrential rain and snow.

More than 75 percent "of the grave violations recorded in 2020 occurred in the northwest", the UN agency said.

The UN agency is appealing for $1.4 billion for its response inside Syria and the neighboring countries for 2021.