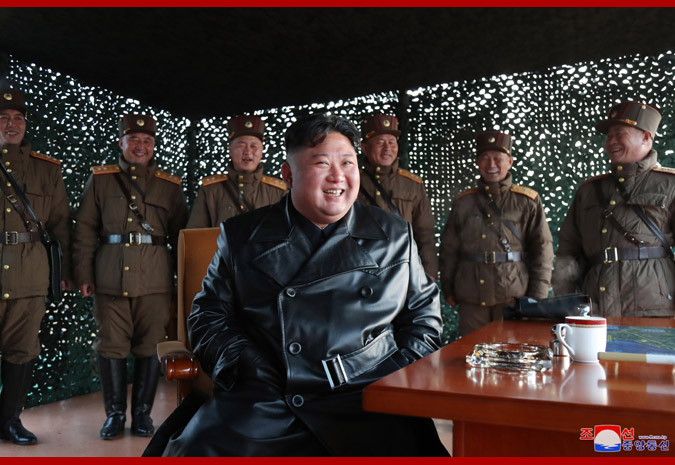 The firing was aimed at re-confirming and showing Korean People's Army commanding officers the tactical characters and power of a new weapon system to be delivered to the army units, the report said.
After Kim gave an order, the projectiles were fired "with roaring sound and dazzling flare to precisely hit a target islet," the report said.
The firing clearly proved "the characters of different flight trajectories and falling angles, accuracy of guided shells and their power," it said.
The KCNA report did not specify what kind of weapon was tested, but the South Korean military said the DPRK on Saturday morning test-fired two projectiles believed to be short-range ballistic missiles into the East Sea.
Kim said that the new-type weapon systems which the DPRK has recently developed and the tactical and strategic weapon systems in the development stage will make decisive contributions to the realization of the Workers' Party of Korea's strategic plan to make a radical change in the national defense strategy.
"We must further build up the striking capability which can wipe any enemy out of our territory if it dares to launch a military action against our state and this is just the aim of building up our defense capability," he added.
It is the third time the DPRK test-fired weapons in March, with the last two on March 2 and 9.