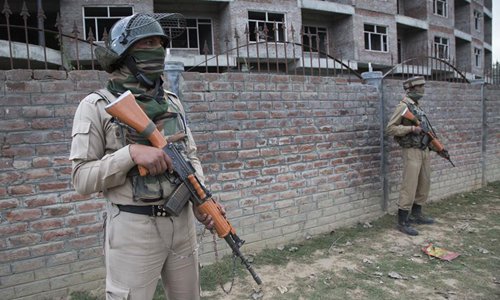 The gunfight broke out at village Dadsara of Tral in Pulwama district, about 39 km south of Srinagar city, the summer capital of Indian-controlled Kashmir.

"On a specific information about presence of militants in Dadsara here this evening, contingents of police and army cordoned off the village and zeroed in on a suspected area. The militants present there, fired upon the position of advancing contingents, which was duly retaliated and thus a gunfight broke out," a police official on the condition of anonymity told Xinhua over telephone from Tral.

"In the ensuing gunfight, two militants are said to have got killed and of them one is Zakir Musa, who was one of the most wanted."

The government forces have not suffered any damage in the stand-off, police said.

Police is yet to officially confirm the killing of Musa.

Zakir Musa was a close associate of Burhan Wani, the slain top militant commander of Hizbul Mujahideen who was killed in 2016 during a gunfight.

Wani's killing triggered massive street protests in the region and resulted in the killing of around 100 people mostly young people.

Originally named Zakir Rashid Bhat and operating under nom de guerre Zakir Musa, he snapped his ties with Hizbul Mujahideen and later on went to head the Al Qaeda affiliate in the region.

He advocated the establishment of an Islamic State in the region and said Kashmir was not a political dispute but a religious struggle.

Authorities have suspended mobile internet services in the region including Srinagar, besides ordering closure of all schools and colleges in Muslim majority areas on Friday fearing street protests.

A senior government official Baseer Ahmad Khan was quoted in local media as saying the decision was taken as a precautionary measure.

Meanwhile, administration has also decided to impose restrictions in the old parts of Srinagar.

A separatist movement and guerrilla war challenging New Delhi's rule is going on in Indian-controlled Kashmir since 1989.

Kashmir, the Himalayan region divided between India and Pakistan is claimed by both in full. Since their independence from Britain, the two countries have fought three wars, two exclusively over Kashmir.