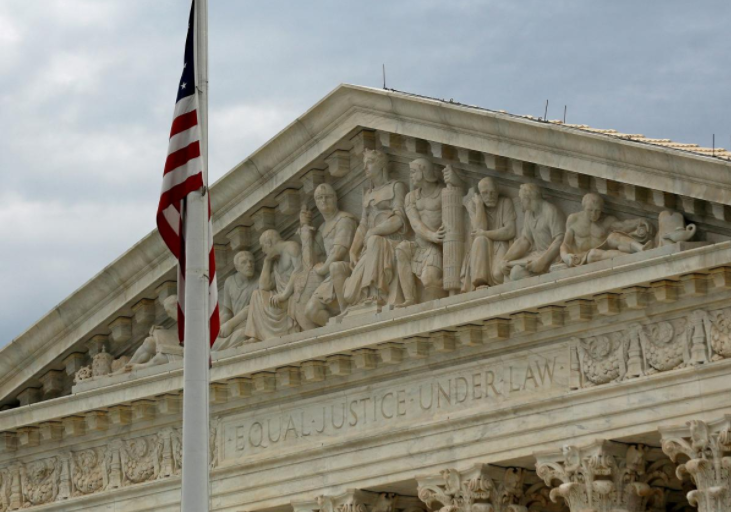 A view of the US Supreme Court building is seen in Washington, DC, US, October 13, 2015. Photo: Reuters/Jonathan Ernst

The US Supreme Court on Tuesday curbed the ability of immigrants held in long-term detention during deportation proceedings to argue for their release in a ruling in sync with President Donald Trump’s get-tough approach toward immigration.

The justices, in a 5-3 decision, overturned a lower court’s ruling that required that immigrants held by the US government who are awaiting the outcome of deportation proceedings get a bond hearing after six months of detention to seek their release.

The court’s five conservatives were in the majority in the ruling written by Justice Samuel Alito, and three liberals dissented, including Justice Stephen Breyer, who sharply criticized the decision. Another liberal, Justice Elena Kagan, did not participate in the ruling.

The court threw out a 2015 decision by the San Francisco-based 9th US Circuit Court of Appeals, which had ruled that the government must provide bond hearings to gauge danger and flight risk when detention exceeds six months, and every six months after that. Former President Barack Obama’s Justice Department appealed that ruling.

Breyer, in a lengthy dissent, said that forbidding bail would likely violate the US Constitution’s guarantee of due process under the law. Breyer said he doubted the US Congress, in crafting the immigration provisions at issue in the case, would have wanted to put thousands of people at risk of lengthy confinement in the United States without any hope of bail.

“We need only recall the words of the Declaration of Independence, in particular its insistence that all men and women have ‘certain unalienable Rights,’ and that among them is the right to ‘Liberty,'” Breyer wrote.

Alito said that the immigration law provisions in question cannot be interpreted to limit the length of detention. He called Breyer’s view of the statutes “utterly implausible.”

Class action litigation brought by the American Civil Liberties Union challenged the US government’s practice of placing immigrants facing deportation proceedings in detention for months or years without a chance to argue for release.

The case assumed added importance in light of the Trump administration’s decision to ramp up immigration enforcement, with growing numbers of people likely to end up in detention awaiting deportation.

The government has argued that bond hearings can be permitted in certain instances, but opposed a blanket rule requiring them.

Those suing included immigrants who were held at the border when seeking illegal entry as well as others, including lawful permanent residents who hold so-called green cards, who have been convicted of crimes.

In dissent, Breyer said that asylum seekers or non-citizens who arrive at the US border still have due process rights.

“We cannot here engage in this legal fiction,” Breyer wrote.

Breyer added, “No one can claim, nor since the time of slavery has anyone to my knowledge successfully claimed, that persons held within the United States are totally without constitutional protection.”

The lead plaintiff is Alejandro Rodriguez, a legal immigrant from Mexico living in California who was brought to the United States as a baby. He was working as a dental assistant when he was detained for three years without a hearing after being placed in deportation proceedings based on two non-violent convictions, joyriding and misdemeanor drug possession.

Although Rodriguez was released eventually, the case brought on his behalf continued.

The justices issued the ruling on Tuesday after hearing the case for a second time. The Oct. 3 arguments came after they decided to rehear the case with a full complement of nine justices, with Trump’s conservative appointee Neil Gorsuch joining the court in April 2017, after earlier holding arguments while shorthanded by one.