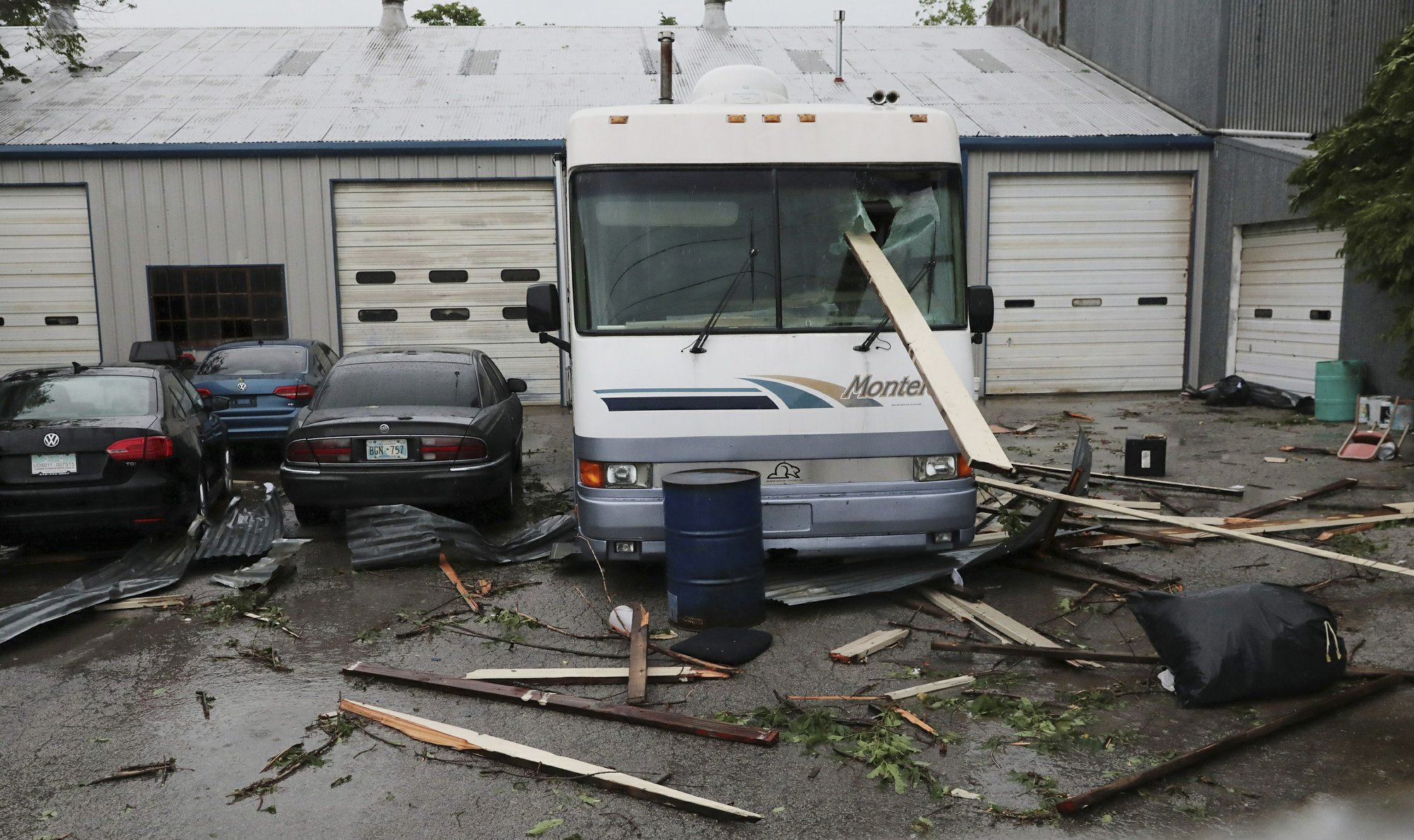 A RV has a board through the front windshield after storms did damage near Marshall and North Rockford in Tulsa, Okla.,on Tuesday, May 21, 2019. (Photo: AP)

A tornado touched down Tuesday near Tulsa International Airport, injuring at least one person and damaging about a dozen homes, amid storms in the Southern Plains that brought a deluge of rain and powerful winds, closing an interstate and flipping campers at a raceway.

Storms could bring more tornadoes and flash flooding to parts of Arkansas, Illinois, Kansas, Missouri and Oklahoma on Tuesday.

Storms Monday evening flipped campers at Lucas Oil Speedway in Hickory County, Missouri, injuring seven people, four of whom were taken to hospitals. The speedway’s grandstand also was destroyed, forcing cancellation of racing this weekend that was expected to draw about 3,000 campers. Details about injuries were not immediately available.

The tornado Tuesday morning in Tulsa didn’t damage the airport, but passengers were moved into shelters for about 30 minutes, according to spokesman Andrew Pierini said. Many flights were canceled or delayed because of the storms.

The twister touched down at about 6:30 a.m. about 4 miles (6 kilometers) from the airport.

“We had to rescue a man, he was pinned under a tree this morning,” said Tulsa Area Emergency Management spokeswoman Kim MacLeod. The man’s condition was not immediately known.

“We’ve had some other reports of damage to homes and trees down,” and damage assessments would continue throughout the day, MacLeod said.

Flooding was also an issue. The Oklahoma Department of Transportation shut down Interstate 40 in El Reno, about 25 miles (40 kilometers) west of Oklahoma City, because of high water. The National Weather Service says up to 5 inches (13 centimeters) of rain had fallen since Monday.

In El Reno and Stillwater, home to Oklahoma State University about 55 miles (88 kilometers) northeast of Oklahoma City, emergency responders were rescuing people from their homes because of high water.

St. Louis’ major sports teams — the NHL’s Blues and baseball’s Cardinals — said they were both prepared for storms that could be rolling through just as they’re playing blocks apart on Tuesday night.

The Blues said in a statement that they are coordinating with St. Louis emergency managers and police to monitor the weather. Fans are told to stay in their seats if a strong storm hits during one of the biggest games in franchise history: A win against the San Jose Sharks would send the Blues to their first Stanley Cup Finals since 1970.

The Cardinals, in a statement, said Busch Stadium has clearly marked storm shelters and a detailed plan to alert fans in case of a weather emergency. The Cardinals are playing the Kansas City Royals in the opening of a series against their cross-state rivals.

“Busch Stadium is the first ballpark in Major League Baseball certified as a ‘Storm Ready Facility’ by the National Weather Service,” the Cardinals said.

Heavy snow melt from the north and significant spring rains have led to waves of flooding in Missouri, and President Donald Trump on Monday issued a major disaster declaration for 13 counties in the state damaged by March flooding.

The Missouri River is expected to reach major flood stage by the end of the week at Jefferson City, Hermann, St. Charles and elsewhere. The levee near Jefferson City’s airport holds back water up to 30 feet (9.14 meters), Cole County Emergency Manager Bill Farr said, but the National Weather Service expects a crest of 32.3 feet (9.85 meters) Thursday. Sandbagging won’t help because the levee is too long, he said.