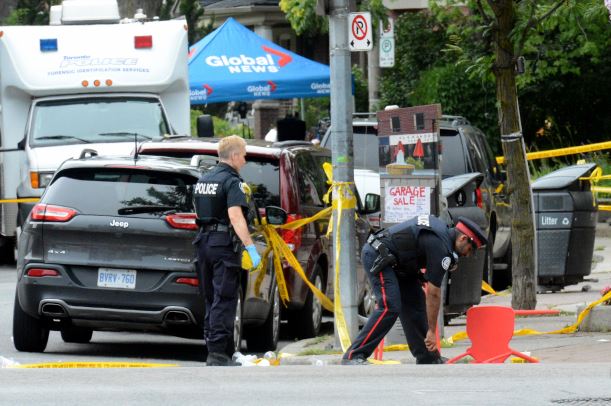 Toronto Police investigate the scene of a shooting from the night before in Toronto, Ontario, Canada on July 23, 2018. (Photo: AFP)

Victims of a 2018 shooting rampage in Toronto that left two dead and 13 injured are suing the American maker of the pistol used in the attack, holding it responsible for not making guns safer.

The class action, according to court documents obtained by AFP on Tuesday, alleges that Smith and Wesson knew that its M&P 40 handgun "was an ultra-hazardous product."

And it should have known that the weapon might end up being stolen and used to harm or kill innocent people, the suit claims.

Yet the company chose not to incorporate safety features such as fingerprint recognition to prevent unauthorized users, it alleges.

The class action, which must still be certified, is seeking Can$150 million ($115 million) in damages.

Lead plaintiffs Samantha Price and Skye McLeod said in a statement of claim that they'd gone out for ice cream with friends on the evening of July 22, 2018 when they were confronted by a man opening fire on Toronto's bustling Danforth Avenue.

Price was struck by a bullet, but survived. McLeod was injured while fleeing. Their friend Reese Fallon, 18, and 10-year-old Julianna Kozis were shot dead.

After an exchange of gunfire with police, the shooter took his own life.

Police still don't know how he obtained the gun, which had been reported stolen from a Saskatchewan shop in 2015.

But the lawsuit notes that Smith and Wesson was aware that "more than 200,000 firearms" like the one used in the Danforth shooting "were stolen from their owners every year in the United States."

The company had agreed in 2000 to incorporate smart gun technologies in new models by March 2003 to address this.

The deal, however, collapsed after the United States passed a law in 2005 shielding gun manufacturers and dealers from liability when crimes are committed with their products.

The shield does not apply in Canada.

In March, a Connecticut court ruled that US gunmaker Remington can be sued over the 2012 massacre at the Sandy Hook elementary school in which one of its weapons was used to kill 20 children and six staffers.

That lawsuit alleges that Remington is culpable because it knowingly marketed a military grade weapon that is "grossly unsuited" for civilian use yet had become the gun most used in mass shootings.

In the Canadian case, the plaintiffs say Smith and Wesson should have included safety technology in its .40-caliber semi-automatic pistol, which was made available for sale in Canada starting in 2013, "so as to avoid, prevent or deter substantial and foreseeable harm."

Manufacturers have claimed that the technology is expensive and impractical.

Patrick McLeod, the father of one of the Danforth victims and a former police officer, disagrees.

"I can look at my iPhone and it unlocks. Meanwhile, we're selling semi-automatic handguns that have no safety devices on them at all," he told the Globe and Mail.