Tortoises retire after saving their species 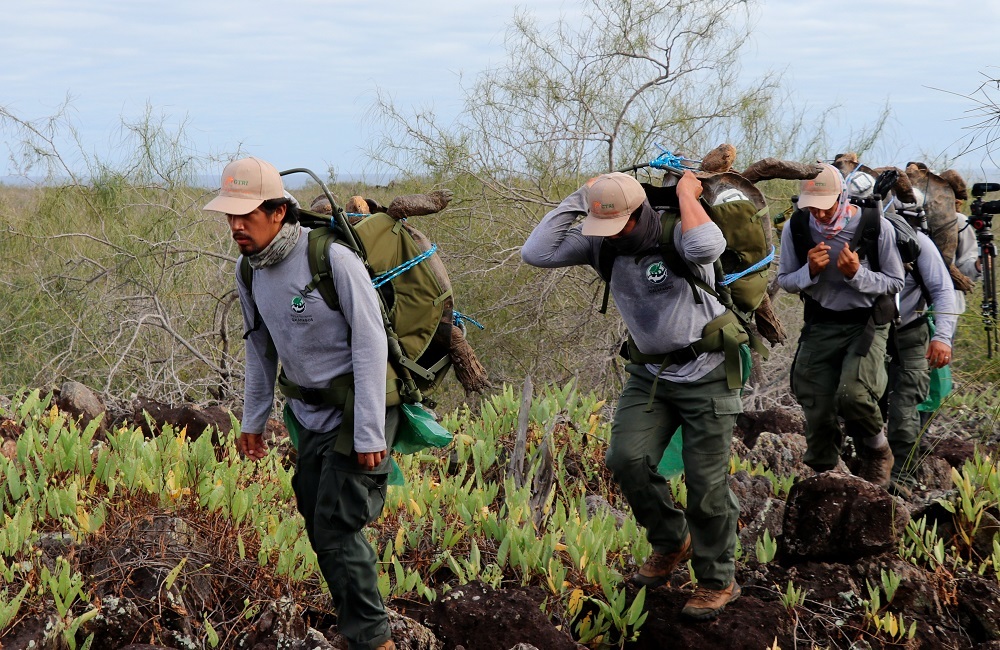 Volunteers from the Galapagos National Park carrying giant tortoises to be released on the Espanola Island, part of the Galapagos Islands in Ecuador, on Monday. (Photo: Agencies)

QUITO, Ecuador－A group of giant tortoises who have lived in captivity for decades and helped rescue their species from the brink of extinction were released into the wild in the Galapagos Islands on Monday.

The tortoises were bred in captivity to repopulate the islands after their numbers in the wild went down to just 15 individuals, said Danny Rueda, the park director. There are now more than 2,000 of them on Espanola Island, he said.

The giant tortoises are known for their long, leathery necks and life spans of over 100 years. Virtually synonymous with the Galapagos Islands off the coast of Ecuador, they were one of the species that helped Charles Darwin form his theory of evolution in the 19th century.

One of the newly freed tortoises is Diego, estimated to be around 100 years old. Renowned for his fertility, he alone has fathered some 800 offspring.

Diego was shipped out from the Galapagos National Park's breeding program on Santa Cruz Island to remote and uninhabited Espanola.

"We are closing an important chapter" in the management of the park, said Paulo Proano, the park's minister, on Twitter, adding that 25 tortoises, including the prolific Diego, "are going back home after decades of reproducing in captivity and saving their species from extinction".

Espanola welcomed them "with open arms", he said.

Before being taken back by boat to Espanola, Diego and the other tortoises had to undergo a quarantine period to avoid them carrying seeds from plants that are not native to the island.

Diego's contribution to the program was particularly noteworthy, with park rangers believing him responsible for being the patriarch of at least 40 percent of the 2,000-tortoise population.

Around 50 years ago, there were only two males and 12 females of Diego's species alive on Espanola, and they were too spread out to reproduce.

Diego was brought in to join the breeding program, which was set up in the mid-1960s to save his species, Chelonoidis hoodensis.

For his final journey home, Diego was taken by boat to Espanola, along with 14 of his companions. From there, rangers used backpacks to take the tortoises－who can weigh up to 180 kilograms－to an area where cactus grows in abundance that will help them readapt. There, they will be monitored with GPS trackers.

It has been a conservation success story. "We can shut down the captive breeding program of this species because their natural behavior is effective," said Rueda.