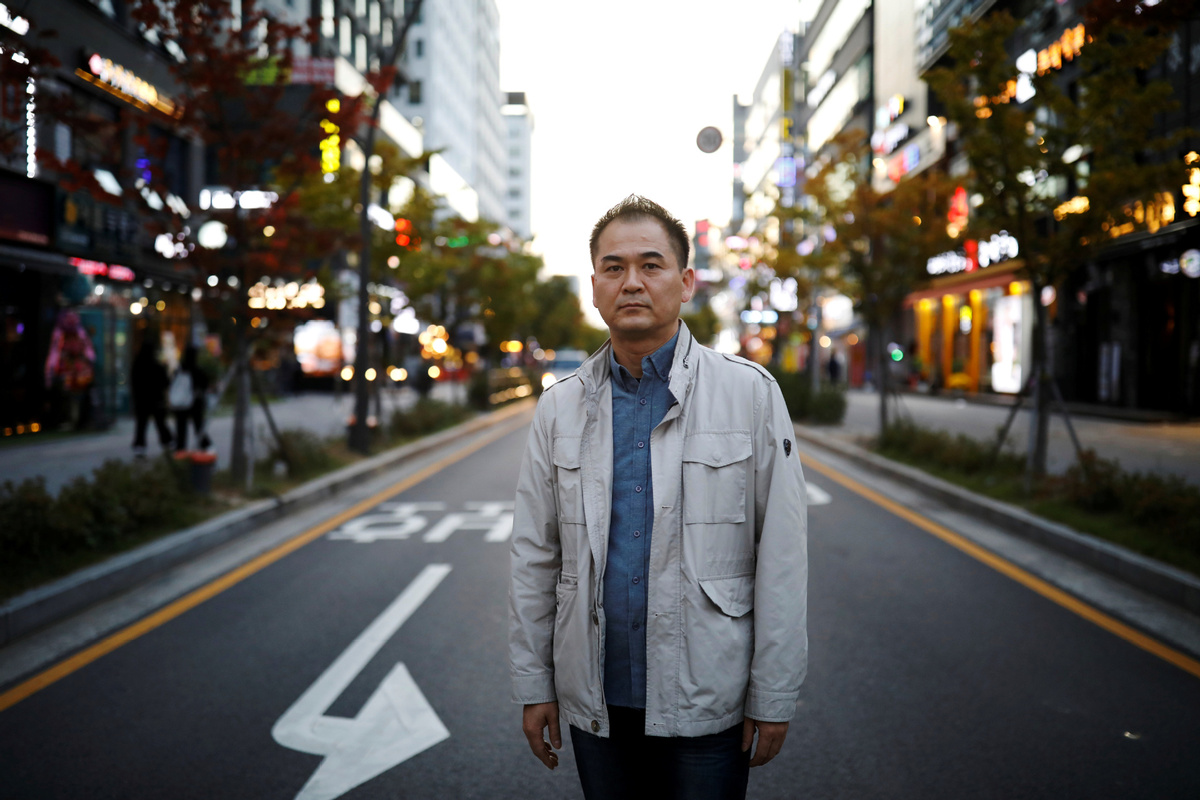 Park Chol-hee, whose brother was killed in a crane collapse in 2017 at a Samsung shipyard, poses for photographs in Seoul, South Korea, October 18, 2019. (Photo: Agencies)

Park Cholhee was working the holiday shift at Samsung Heavy Industries' Geoje shipyard on Labor Day, 2017, when a giant crane collided with another and crashed to the ground, killing six people, including Park's younger brother.

"It was as if a bomb was dropped," Park said. "Bodies were too mutilated to describe."

Park and his brother Sung-woo were among nearly 1,500 subcontracted employees - 90 percent of the shipyard workforce that day - building an oil and gas platform for French energy giant Total.

All six killed and 25 workers who were injured were subcontractors, who receive lower pay, fewer employment protections and less training compared to full-time employees.

Samsung and other big South Korean conglomerates acknowledge they rely increasingly heavily on subcontractors and temporary workers to cut costs and increase labor flexibility, but they bear little responsibility for workplace accidents, according to interviews with about two dozen workers, subcontractor executives and experts.

And according to a 2018 government-commissioned report, lenient sentences for companies and officials are hampering attempts to reduce occupational accidents in South Korea, which has the third worst industrial safety record among countries in the Organization of Economic Cooperation and Development, or OECD.

More than two years after South Korea's worst shipyard accident in at least a decade, Park says he is suffering from depression and post-traumatic stress disorder which worsened after a court in May ruled that no Samsung officials will serve jail time over the accident.

In an email response to Reuters' questions, Samsung Heavy said it regretted the casualties caused by the accident but could not elaborate further because of the appeal trial.

Samsung's email signoffs read: "Safety is the No 1 value in management."

Total and Park's direct employer Haedong both declined to comment on the story. Haedong, which remains as a subcontractor for Samsung Heavy, was not prosecuted in the criminal trial, court documents showed.

South Korean conglomerates like Samsung have been the backbone of the country's rapid economic transformation - since the devastation of the Korean War - into a global manufacturing and engineering powerhouse.

But as competition has increased and growth slowed, the groups known locally as chaebol, have increased hiring of temporary and subcontracted workers to cut costs, boost production and make it easier to dismiss staff when demand fluctuates, experts and industry officials say.

Temporary workers accounted for 21.2 percent of all workers in South Korea in 2018, nearly double the OECD average of 11.7 percent.

Workers at South Korea's subcontracted firms earned 3.4 million won ($334) per month, only 62 percent of what their peers at prime contractors made, the state-funded Korea Labor Institute said in a report last October.

"This is not just a problem of Samsung, but Korea Inc," said Lyou Sung-gyou, a labor attorney and a member of a presidential labor advisory body. "Conglomerates take profits, but they escape legal responsibility by creating a multilayered subcontractor structure."

South Korea's Ministry of Employment and Labor said it is "essential" to strengthen the responsibility of prime contractors for their subcontractors' safety measures.

"(Prime) contractors know best the risk factors at workplaces controlled or managed by them," the ministry said.