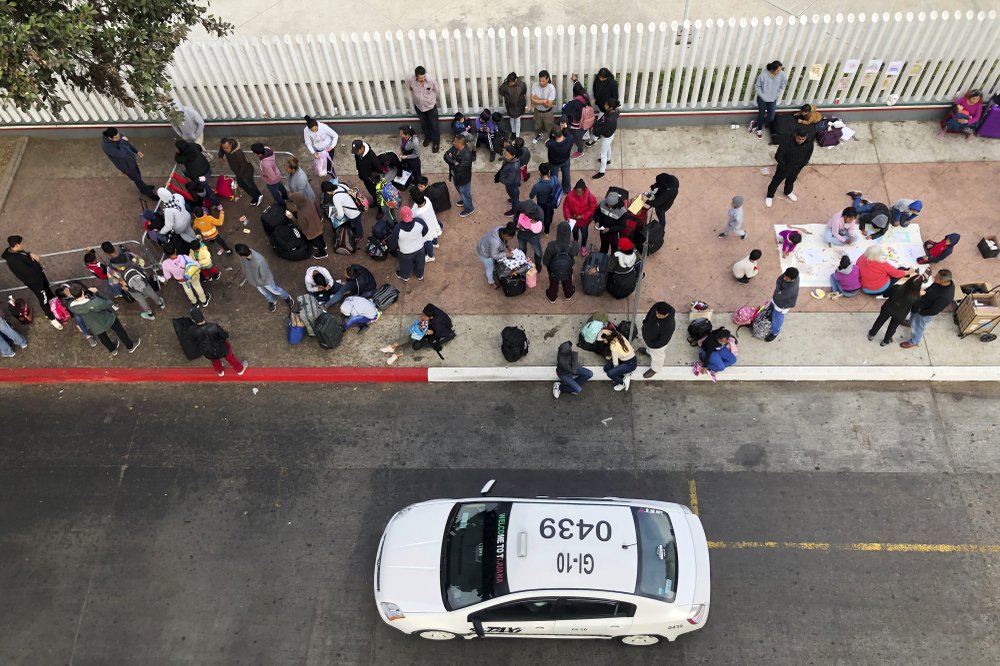 In this Nov. 10, 2019, photo, migrants gather at the US-Mexico border in Tijuana, Mexico, to hear names called from a waiting list to claim asylum in the US. (Photo: AP)

Nkeze wasn’t home when Cameroonian militants came knocking, probably to deliver their signature ultimatum to join their separatist movement or have his writing arm cut off.

The 24-year-old economics student escaped to Douala, the country’s largest city, only to learn that the government wanted to arrest him for participating in a university protest. He then flew to Ecuador and traveled through eight countries to the U.S. border with Mexico, including a trek through Panamanian jungle where he saw corpses and refugees crying for shelter, food and water.

In his quest to settle with relatives in Houston, Nkeze now faces a potentially insurmountable obstacle: a new American ban forbids anyone from applying for asylum at the U.S.-Mexico border if they traveled through another country to get there.

“When you find yourself on U.S. soil, you are well-protected,” Nkeze said, sounding upbeat as he waited in Tijuana for a chance to make his case. “You are protected by human rights.” He spoke to The Associated Press on the condition that he be identified only by his last name due to safety concerns.

The U.S. is increasingly aligning itself with wealthy countries in Europe and elsewhere to make asylum a more distant prospect.

On Thursday, American authorities sent a Honduran man from El Paso, Texas, to Guatemala. It marked the first time the U.S. government directed an asylum-seeker back to that country under the new policy, which gave him an option to file a claim there. He decided against filing a claim and returned to Honduras, according to Guatemala’s foreign ministry.

Asylum was once almost an afterthought, until an unprecedented surge of migrants made the United States the world’s top destination in 2017, according to the United Nations Refugee Agency. The U.S. held its leading position last year, followed by Peru, Germany, France and Turkey.

Nearly half of the roughly 1 million cases in backlogged U.S. immigration courts are asylum claims, with most from Guatemala, El Salvador and Honduras.

Trump has called asylum “a scam” and declared that the country is “full.” In nine months, the administration returned more than 55,000 asylum-seekers to Mexico to wait for their cases to wind through U.S. courts. Another asylum ban on anyone who crosses the border illegally from Mexico is temporarily blocked in court.

It’s unclear how the ban will be rolled out.

The U.S. Homeland Security Department did not comment on Thursday’s initial flight, which got a bare-bones announcement from Guatemala’s foreign ministry. The U.S. has struck agreements with Guatemala, El Salvador and Honduras that aim to send back asylum-seekers who pass through their countries, but the Central American nations are woefully unprepared to accept large numbers.

The U.N. Refugee Agency said Tuesday that the ban is at odds with international law and “could result in the transfer of highly vulnerable individuals to countries where they may face life-threatening dangers.”

Asylum is designed for people fleeing persecution based on their race, religion, nationality, political beliefs or membership in a social group. It isn’t intended for people who migrate for economic reasons, but many consider it their best hope of escaping poverty and violence.

The U.S. isn’t alone in asking other countries to block migrants. After about 1 million refugees traveled through Turkey and Greece to seek safety in Europe, the European Union agreed in 2016 to pay Turkey billions of euros to keep them in refugee camps.

The EU has also funded the Libyan Coast Guard to stop Africans from crossing the Mediterranean, where thousands have drowned. Libyan forces have kept refugees in squalid conditions and inflicted torture.

Since 2001, Australia has intermittently blocked boats from Asia and detained asylum-seekers on Christmas Island, a tiny Australian territory, or sent them to Papua New Guinea and Nauru, an island nation of 10,000 people. Australia pays detention costs.

The U.S. long resettled more refugees than any other country, raising its ceiling to 110,000 during President Barack Obama’s last year in office. That practice has been sharply curtailed since Trump took office, with the country planning to resettle no more than 18,000 refugees in 2020.

“There’s this race to the bottom around the world, and governments are looking to each other and trying to figure out what’s the harshest policy they can get away with,” said David FitzGerald, a sociology professor at University of California at San Diego and author of “Refuge Beyond Reach: How Rich Democracies Repel Asylum-seekers.”

Cameroonians hoping to follow Nkeze’s path face mounting obstacles. Ecuador, the main gateway from Europe, began requiring visas for Cameroonians and 10 other nationalities in August, including six in Africa. Under heavy pressure from Trump, Mexico is bottling up Cameroonians and other U.S.-bound asylum-seekers near its southern border with Guatemala.

Nkeze walked through Panama’s remote, mostly roadless Darien Gap in less than four days on his way to the U.S. After giving his tent and raincoat to a woman who was clinging to life, he slept on a stone and prayed for clear skies and morning light. Only about a dozen in his group of 40 men could keep up in a race to a refugee camp on the other side of the jungle.

When his 20-day transit permit in Mexico expired, Nkeze helped a friend at a Tijuana juice factory for a cut of his earnings and lived at a no-frills hotel in the city’s red-light district.

Even before the ban, asylum was difficult to get in the U.S. Judges granted only 21% of cases, or 13,248 out of 62,382, in the 2018 fiscal year. Nkeze can also ask for two variations of asylum, but they are even harder to obtain, with 3% succeeding under “withholding of removal” law and only 2% under the U.N. Convention Against Torture.

“They essentially want you to bring a note from your torturer before they are willing to let you stay in the U.S,” said Stephen Yale-Loehr, professor of immigration law practice at Cornell University.

Nkeze may have caught a break when a federal judge in San Diego ruled Tuesday that anyone who appeared at a U.S. border crossing before the ban was announced July 16 and waited for their names to be called should be exempt.

He waited for five months in Tijuana for his turn on a list of nearly 9,000 people seeking asylum at a San Diego border crossing.

When his name was finally called Nov. 12, he wore a Mexican flag pin on the chest of his jacket as Mexican authorities escorted him to U.S. border inspectors. He said it was a show of appreciation.

He was immediately taken into immigration custody and is being held in an Arizona detention center.