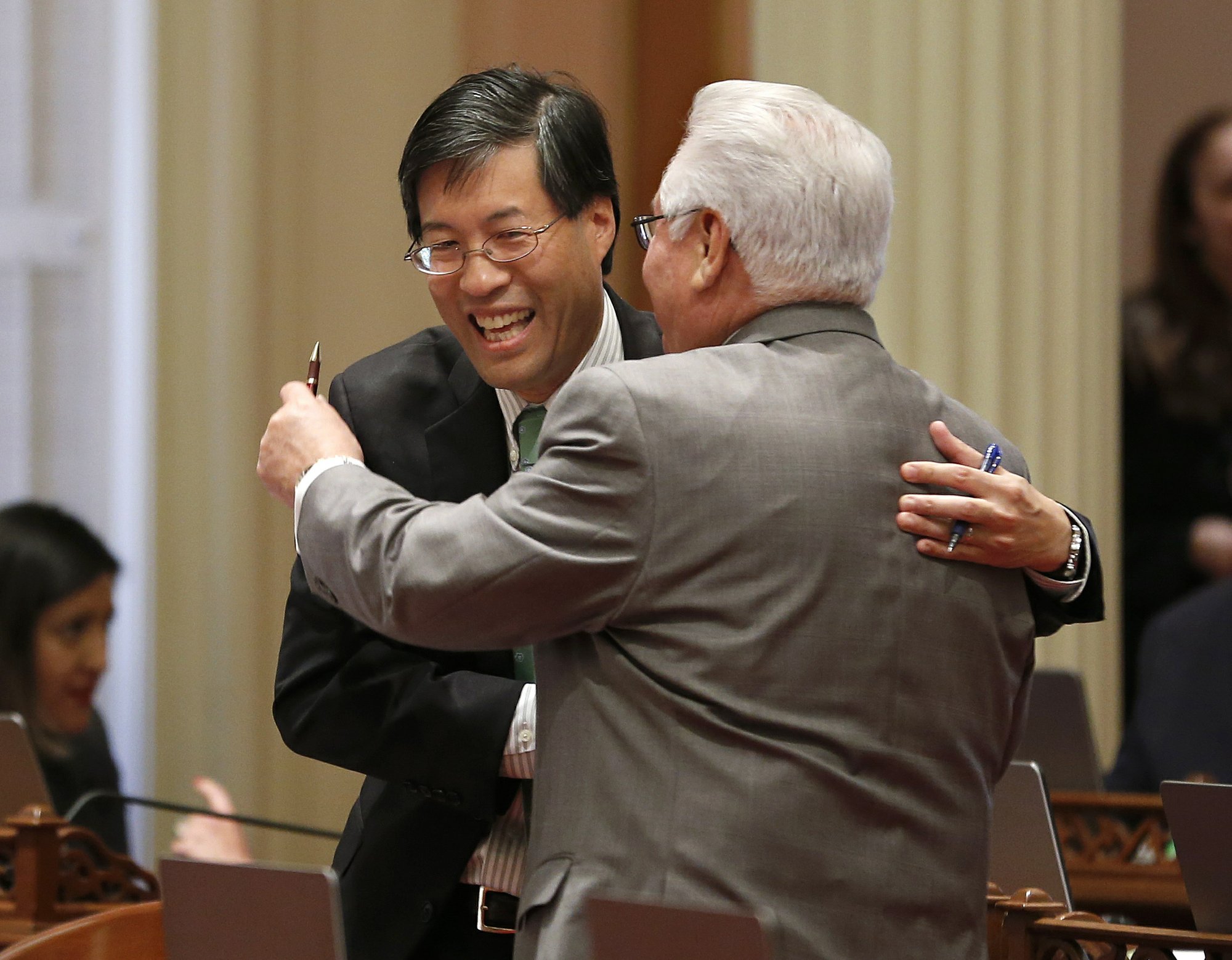 US State Sen. Richard Pan, D-Sacramento, left, receives congratulations from Southern California Democratic state Sen. Bob Archuleta, right, after his measure to toughen the rules for vaccination exemptions was approve by the Senate, Wednesday, May 22, 2019, in Sacramento, Calif. (Photo: AP)

California lawmakers moved ahead Wednesday with tougher rules that limit parents from choosing whether to vaccinate their schoolchildren as a handful of opponents shouted “We will not comply” inside the Senate.

Senators sent the measure to the Assembly as the nation struggles to stem the highest number of measles cases in decades and as state efforts to strengthen vaccine requirements draw emotional opposition.

The California proposal would give state public health officials instead of local doctors the authority to decide which children can skip their shots before attending school.

Democratic Sen. Richard Pan of Sacramento said his proposal is needed because some “unscrupulous physicians” have been selling medical immunization exemptions since California ended non-medical exemptions in 2016.

Under the plan, doctors would have to certify that they examined the patient and then send the state health department the reason they are recommending the exemption. State and county health officials also could revoke exemptions if they are found to be fraudulent or don’t meet federal immunization standards.

“This is about keeping our community safe,” Pan said.

He said exemptions would still be allowed for the less than 1 percent of students who should avoid vaccinations because they have a severe allergic reaction or impaired immunity from a liver problem, the HIV virus, chemotherapy or other conditions. But those with legitimate concerns would then be safer in school because the vast majority of their fellow students would be vaccinated, Pan said.

“It’s scary to me that this state is becoming a police state,” Victoria Kennicutt of Elk Grove, south of Sacramento, said after watching the debate with other opponents. “It’s an issue that should be between the parents and the doctor, not involving the government.”

She said her daughter, Charlotte, broke out in hives after her shots at 6 months and 1 year, developing a high fever that lasted a week and regressing in her speech. She worries that her now-2-year-old daughter’s medical exemption will be voided if the measure becomes law and said she will move out of state rather than comply.

The measure passed on a party-line 24-10 vote, with no Republican support. Four Democratic lawmakers did not vote, with two Democratic senators saying it goes too far or reneges on lawmakers’ earlier promise not to infringe on medical exemptions.

Several Republican lawmakers said they agree the state should crack down on doctors who sell medical exemptions but that they should be sanctioned by the state medical board through the normal disciplinary process.

“Why isn’t the medical board dealing with these bad actors?” Sen. Jeff Stone said.

The Republican from Temecula called Pan’s bill “a dangerous intrusion, not only into the doctor-patient relationship but also the personal liberties of the parents and their children.”

Pan said the medical board has been frustrated in its efforts.

“These families are not cooperating because they’re in cahoots with the physician,” Pan said. “They are truly unable to go after these physicians who are acting unprofessionally.”