Hopes for Thailand's economic recovery have been dealt a blow with the suspension of a quarantine-free program for international tourists, say figures in the all-important hospitality industry who are readjusting their outlook for 2022.

"We are kind of seeing a replay of 2021 where ... hotels are focusing on domestic travel once again," said Bill Barnett, managing director of consultancy C9 Hotelworks in Thailand.

He said that winter in the northern hemisphere was always a key driver for Thailand's tourism sector. Sun-starved people from the region, such as those from the United Kingdom, Germany, Canada and Russia, would flock to the country's beaches and other attractions.

The quarantine-free program, called Test and Go, was launched on Nov 1 as Thailand reopened to tourists from 63 countries. Due to a spike in COVID-19 infections, new registrations for the program were halted on Dec 21. On Jan 7, the program was suspended indefinitely.

Barnett said the timing of the suspension "was not exactly very good".

After the suspension, Thai Prime Minister Prayut Chan-o-cha on Wednesday ordered the launch of a new tourism campaign under the theme Amazing Thailand New Chapter. As with the paused program, it is aimed at reviving the hard-hit tourism sector－a mainstay of the country's economy.

Thailand reported 8,167 new cases on Thursday, bringing the national tally to 2,300,457, data from the Centre for COVID-19 Situation Administration, or CCSA, showed.

The Omicron variant of COVID-19 accounted for 70 percent of the cases reported for the week to Jan 8, according to the Bangkok Post.

The CCSA forecast that the number of daily new cases could jump to 20,000 by the end of January if no serious measures are taken.

Despite the suspension of the Test and Go program, international tourists can still enter Thailand through a so-called Sandbox program, which allows travelers access to some places in the country after spending at least seven days within a Sandbox destination. In addition to Phuket in the south, the government decided on Jan 7 to add the islands of Ko Samui, Ko Tao and Ko Phangan to the program from Jan 11. 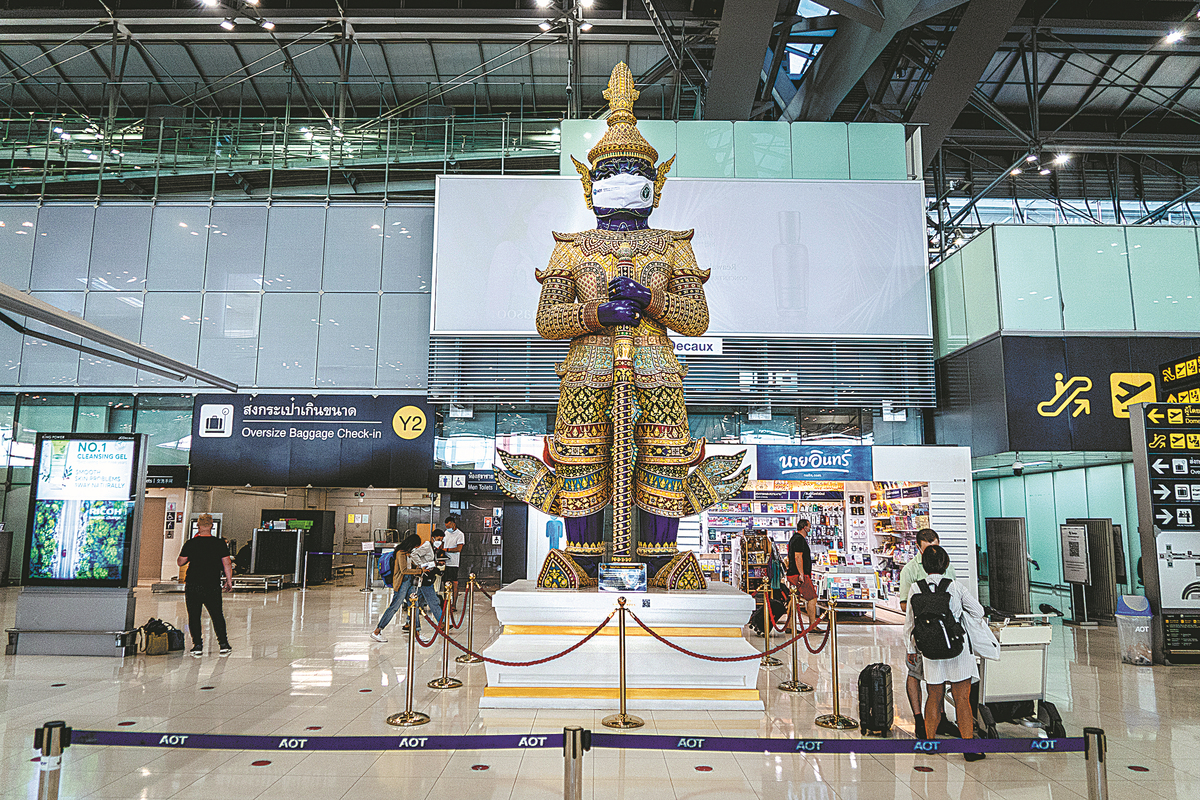 A quiet Suvarnabhumi Airport in Bangkok on Wednesday stands in marked contrast with the pre-pandemic bustle. (Photo: Agencies)

"Over the longer term, we remain optimistic about international travel," said Panicha, noting that Southeast Asia is home to one of the world's fastest-growing markets driven by a large middle class of roughly 300 million people with a strong interest in traveling and a thirst for international aspirations.

Businesses in the Thai tourism industry have called on the government to reconsider the entry restrictions for foreign tourists.

William Heinecke, chairman of hospitality company Minor International in Thailand, said "a more pragmatic approach should be considered" as entry restrictions may cause more harm than good, particularly when domestic transmission of Omicron has already taken root.

The spike in cases fueled by Omicron has also affected Thailand's economic outlook.

Kirida Bhaopichitr, director of the Economic Intelligence Service at the Thailand Development Research Institute, said she had to lower the forecast for Thailand's GDP growth this year to 3-3.5 percent from 3.5-4 percent after the latest spike in infections.

Indonesia opened its booster campaign on Wednesday as the country records rising infections driven by the Omicron variant.

Elsewhere in the region, the Philippines reported 32,246 new cases on Wednesday, the second-highest single-day tally since the pandemic began in January 2020.

Officials blamed the spike on high mobility, poor compliance with safety health protocols during the holiday season, and the fast-spreading Omicron and Delta variants.