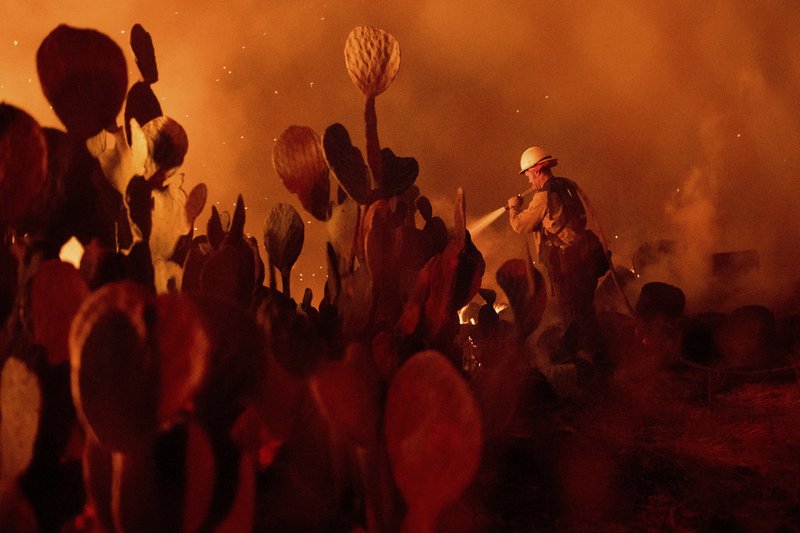 The biggest and most destructive of the windblown fires raking Southern California shut down one of the region’s busiest freeways Thursday and threatened Ojai, a scenic mountain town dubbed “Shangri-La” and known for its boutique hotels and New Age spiritual retreats.

Most of Ojai’s 7,000 residents were warned to clear out late Wednesday and patients unable to walk were moved from the Ojai Valley Community Hospital because of unprecedented, hurricane-force Santa Ana winds in the overnight forecast.

The winds turned out to be less fierce than expected, but firefighters still had to contend with gusts that fanned the fire to 150 square miles (388 square kilometers) and put thousands of homes in jeopardy.

Down along the coast, fires flared along U.S. Highway 101, forcing an evacuation of the tiny community of Faria Beach.

Joseph Ruffner, who left earlier in the week, said he was staying put.

“This morning there was a wall of fire back right over here,” he said. “I didn’t think it was no big deal, but it’s coming back to burn what it didn’t burn yesterday.”

The highway, which runs the length of the state and is a major commuter corridor to Los Angeles, was closed intermittently along the 28-mile (45-kilometer) stretch between Ventura and Santa Barbara.

The Ventura County blaze and three other major fires burning in the Los Angeles area have put tens of thousands of people under evacuation orders and destroyed nearly 200 homes and buildings, a figure almost certain to rise.

A woman was found dead in a wrecked car in an evacuation zone near the city of Santa Paula, where the Ventura County blaze began Monday night, but officials could not immediately say whether the accident was fire-related.

In Ojai (OH’-hi), the normally bustling town was practically vacant as smoke hung along the surrounding hillsides. Known as “Shangri-La,” both for its role as the stand-in for a Himalayan utopia in the 1937 Frank Capra movie “Lost Horizon” and for the magical vibe it is said to have, the town has attracted artists, hippies and spiritual thinkers for generations.

It is a popular getaway some 60 miles (96 kilometers) northwest of Los Angeles for visitors looking for tranquil hikes, farm-to-table dining and spa treatments that include aromatherapy and a modern-day sweat lodge.

Like many of the places that have seen repeated catastrophic fires, such as Malibu or Bel-Air, which continued to smolder from a fire that destroyed four homes Wednesday, it is an alluring place to live but one that is also prone to burn.

“Part of it is the natural beauty of the area,” said Ventura County Fire Capt. Brendan Ripley. “The brush-covered hills, the rock formations, the steep terrain ... all of that helps to promote very active fire behavior.”

Ojai’s downtown burned 100 years ago, and it has been skirted by two of the biggest fires in California history: one in 1932 and another in 1985.

The town is typically sheltered from the strong Santa Ana winds that blow in from the desert. But it is surrounded by dry brush that hasn’t burned in years.