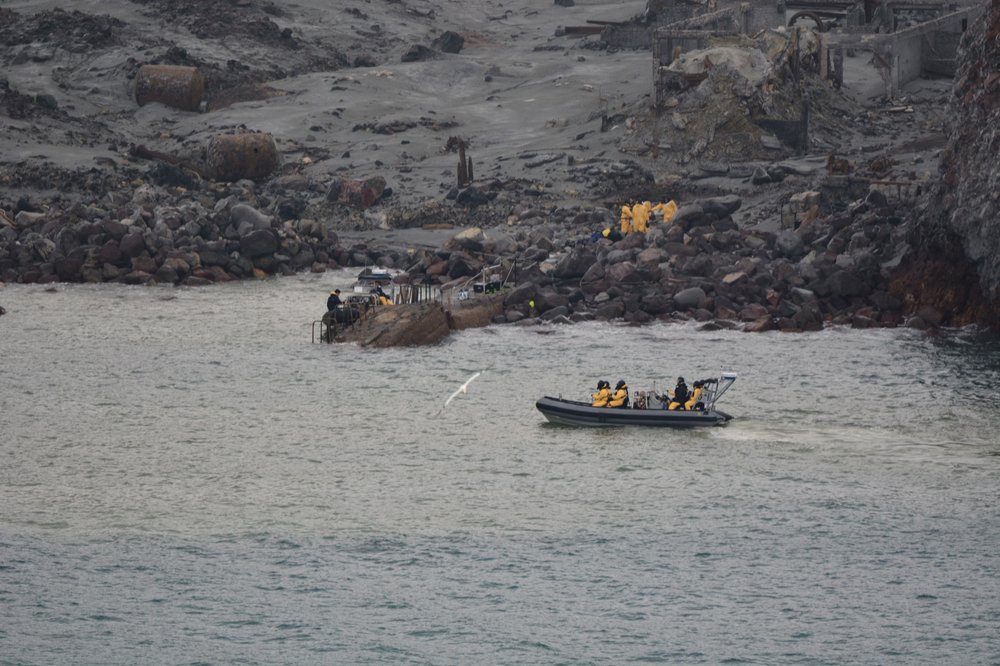 An operation to recover bodies from White Island after a volcanic eruption in Whakatane, New Zealand, December 13, 2019. A team of eight New Zealand military specialists landed on White Island early Friday to retrieve the bodies of victims after the December 9 eruption. (Photo: AP)

A second land search of New Zealand’s volcanic White Island on Sunday failed to locate the bodies of the last two victims of an eruption that has now claimed 16 lives, most of them tourists.

Ten of the dead are thought to be Australians. Of the 47 people on White Island when it erupted, 24 were Australian citizens and four more were permanent residents of Australia.

Two four-person teams landed on the island by helicopter early Sunday morning and searched a location thought to be the most likely place where one of the bodies might be. The teams, wearing heavy protective clothing, were using breathing apparatus that allowed them to search for only 75 minutes.

They were unable to locate either body and returned to the New Zealand mainland where they underwent decontamination after being exposed to toxic ash and gases.

“We have always anticipated recovering all bodies from the island and we remain deeply committed to that goal to allow families some closure,” Police Deputy Commissioner John Tims said.

Later Sunday, divers were due to resume their search of waters around the island despite near zero visibility that hampered their efforts on Saturday. Rescue teams had reported seeing a body in the sea a day after Monday’s eruption.

Police have not included the two missing — believed to be a New Zealander tour guide and a boat captain who had taken tourists to the island — among the dead until their bodies are recovered. Police meanwhile released the names of five victims who have been formally identified. They include four Australians and one New Zealander.

Among the dead are 15-year-old Zoe Hosking from Australia and her stepfather Gavin Dallow, 53. The first named victim was Krystal Browitt, a veterinary nursing student from Melbourne, Australia, who turned 21 on Nov. 29.

Ash and other fallout from the eruption has made the sea near the island toxic and divers have to be washed clean after every completed dive.

“Divers have reported seeing a number of dead fish and eels washed ashore and floating in the water, ” he said.

Prime Minister Jacinda Ardern called on New Zealanders to observe a minute’s silence in memory of victims of the disaster at 2:11 p.m. on Monday, exactly a week from the eruption. Ardern and her Cabinet will pause in silence during their regular meeting at Parliament in Wellington.

Military specialists recovered six bodies on Friday thought to be of Australians, who were most of the visitors to the island when the volcano blew up.

Scientists have warned that White Island, which is the exposed tip of a mostly undersea volcano, is highly volatile, and has been venting steam and mud regularly.

Husband and wife Pratap and Mayuri Singh were confirmed Saturday to be among survivors. The Atlanta couple are recovering from burns in Auckland’s Middlemore Hospital where their conditions were listed as stable.

Specialist medical teams were heading to New Zealand from Australia, Britain and the United States. Skin banks were also sending tissue to New Zealand hospitals to use for grafts.

Authorities say 24 Australians, nine Americans, five New Zealanders, four Germans, two Britons, two Chinese and a Malaysian were on the island at the time. Many were from a Royal Caribbean cruise ship that had left Sydney two days earlier.