Workers in full protective gear began Thursday to decontaminate some Paris schools tested with unsafe levels of lead following the blaze at the Notre Dame Cathedral, as part of efforts to protect children from risks of lead poisoning. 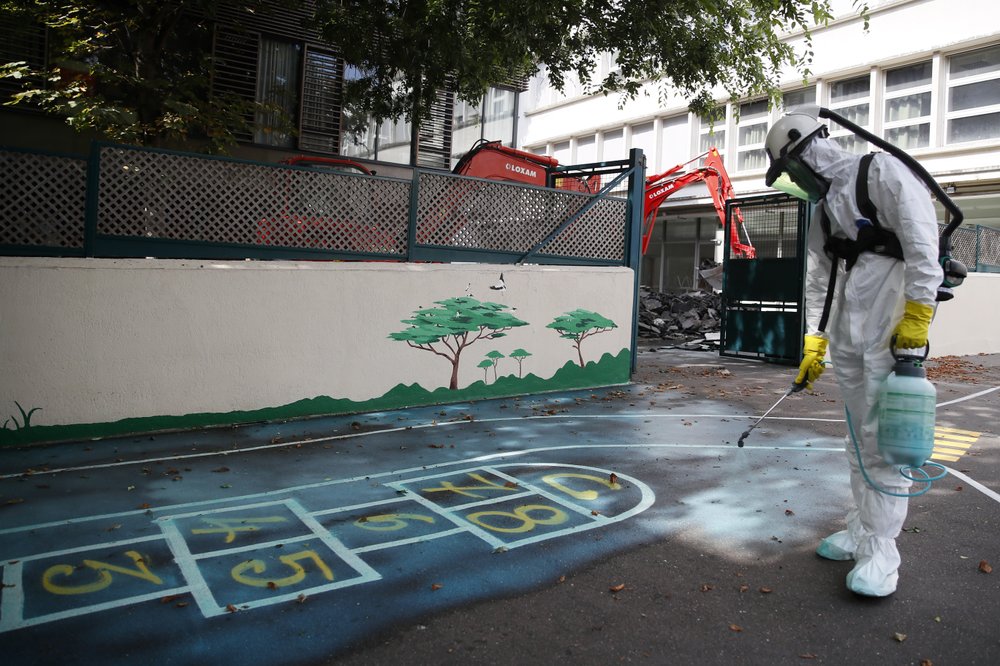 A worker sprays an adhesive product on the ground to gather up the lead particles in the school yard of Saint Benoit primary school in Paris, France, Thursday, Aug. 8, 2019. (Photo: AP)

Paris authorities ordered last month a deep clean and removal of hazardous substances at schools near the cathedral, which was seriously damaged in the April 15 blaze that sent tons of toxic lead from the metal roof into the air. The decontamination work is expected to be completed before children return to school in September.

At Saint Benoit nursery and primary school, a few hundred meters away from Notre Dame, workers donning masks and white protective suits sprayed an adhesive product on the playground floor to keep the lead particles fixed on the surfacing before removing the first layer of the playground. They were planning to fully renovate it by the end of the month.

Mickael Prestavoine, director of industrial operations at Seche Urgences Interventions, said a decision was made last week to "excavate the schoolyard" after local authorities conducted multiple tests that found lead on the surface material.

Paris' regional health agency recommended in June blood tests for children under 7 and pregnant women who live near Notre Dame as they are especially vulnerable to health problems from lead poisoning and exposure.

Earlier this week, the agency said a young boy needs medical monitoring because tests showed that he was at risk of lead poisoning. Sixteen others were deemed to be just short of being "at risk" and will also be monitored as a precaution, out of a total of 162 children who have been tested for lead in Paris.

Lead removal work at the cathedral itself is set to resume next week with stricter safety procedures after authorities suspended it last month under pressure from labor inspectors concerned about health risks for workers.

Levels of lead remain exceptionally high at some spots inside the cathedral, in the plaza outside and on adjacent roads. Those areas have been closed to the public since April 15.

However, no dangerous levels have been registered in other nearby streets, where tourists and residents continue to gather and souvenir shops and restaurants have reopened.