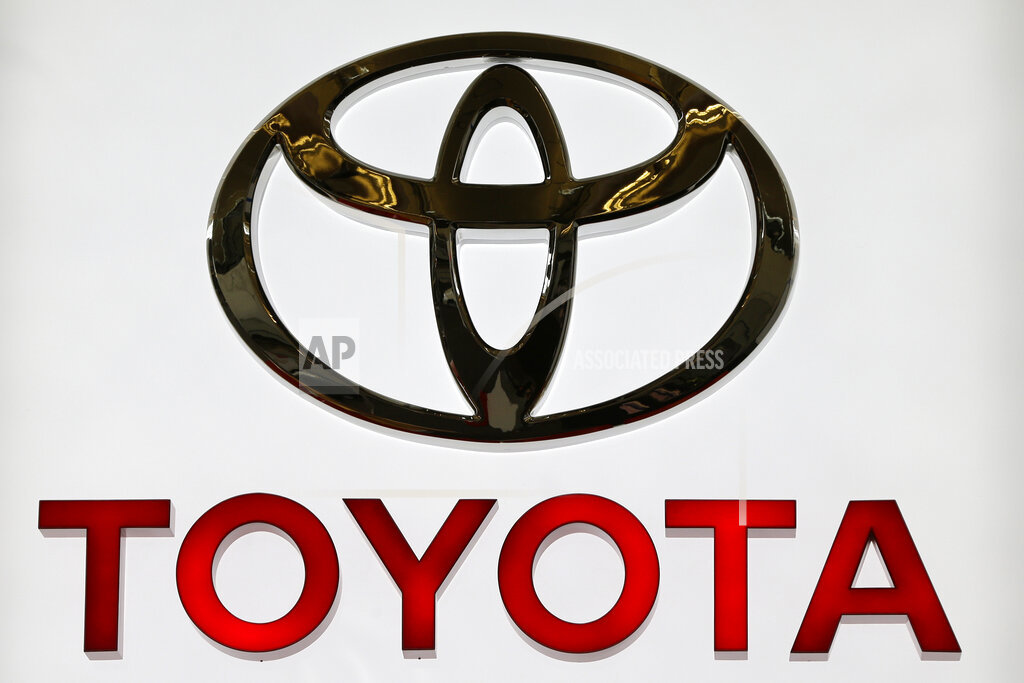 This photo taken Feb. 14, 2013, shows the Toyota logo on a sign at the Pittsburgh Auto Show in Pittsburgh. Toyota says it hopes to prevent further cases after authorities ruled that one of its engineers killed himself after being repeatedly ridiculed by his boss. The company acknowledged the case, reported Tuesday, Nov. 19, 2019. (AP Photo/Gene J. Puskar)

TOKYO (AP) — Japanese authorities have ruled that an engineer at Toyota was suffering from power harassment on the job when he killed himself after being constantly ridiculed by his boss.

Toyota Motor Corp. acknowledged the case after reports of the ruling emerged Tuesday. The company said it hopes to prevent further such cases and expressed condolences over the death.

A regional labor bureau ruled in September that the 2017 suicide entitled the victim's family to compensation under a law regarding job-related deaths.

Yoshihide Tachino, the attorney for the victim and his family, said Toyota was responsible for mismanagement for allowing the harassment to continue.

The case came amid growing awareness of problems with what the Japanese call "power harassment."

"When a worker suffers psychologically from the traumatic experience of harassment, that worker may continue to suffer even after he or she is able to return to work," Tachino said in a telephone interview Tuesday.

Tachino said the 28-year-old worker was repeatedly called an idiot by his boss, and told he should die. His name was withheld due to privacy concerns.

After earning a master's degree at the prestigious University of Tokyo, he joined Toyota in 2015. After a year of training he was sent to the company's headquarters in Toyota city in Aichi Prefecture, central Japan.

That's when the harassment started.

The young engineer's boss harassed him with constant insults, ordering him not to take days off and ridiculing his educational background, since his undergraduate degree was from a less elite school, according to an investigation into the case.

The engineer told those around him that he could not endure the harassment and would rather die to be freed from suffering.

He was often so nervous his hands shook, Tachino said.

The engineer took some time off in 2016, citing mental stress. When he returned to work, Toyota assigned him to another section, but he was still working on the same floor as his former boss.

"Our son joined Toyota with great hopes," his family said in a statement.

"But his life took a wrong turn because of the extremely cruel, violent words of his boss. And he is now gone," it said.

"We cannot forget our son. We miss him unbearably, each day."

The case highlights a tragic but endemic problem in Japan, where a workaholic corporate culture and zealous loyalty to an employer are often taken for granted.

Despite government efforts to change that, workers often forego vacations and put in many hours of overtime without pay.

Few workers would opt to leave such a respected company as Toyota; job-hopping tends to be for the adventurous in Japan, where mid-career job changes usually result in steps down, not advancement.

The Japanese workplace is also fraught with social pressures. Being liked by co-workers and maintaining harmony tend to take precedence over assessments of performance and ability.

In 2018, 199 suicides were ruled job-related, or "karojisatsu," according to the Ministry of Health, Labor and Welfare. The term, which means "suicides from overwork" was coined from the word "karoshi," or "death from overwork," used to describe workers who die suddenly after putting in extremely long hours.

One in five workers in Japan puts in an average of 49 hours of work a week or more, and 60% of workers clock more than 40 hours a week, according to government data.

Other high-profile companies have seen deaths from overwork.

In a 2015 case at Tokyo-based advertiser Dentsu, Matsuri Takahashi jumped to her death from her apartment balcony after working 100 hours of overtime a month. She had been coming home at five in the morning after working all day and night.

In an ongoing case, Canadian Glen Wood has sued brokerage giant Mitsubishi UFJ Morgan Stanley, demanding his job back as equity sales manager, alleging he was harassed after he took paternity leave.