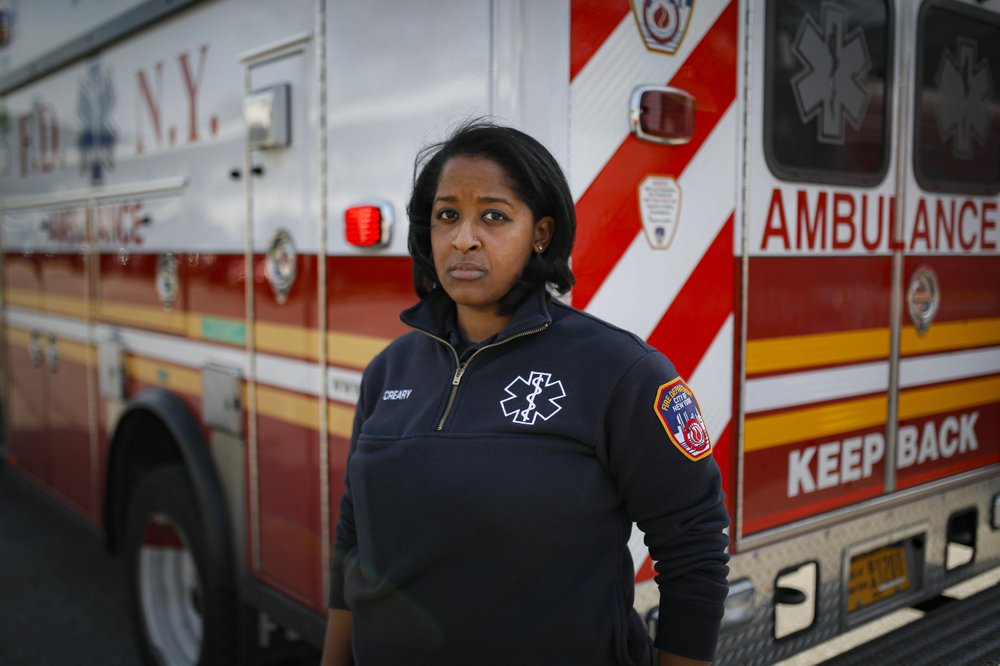 In this April 7, 2020, photo, Virginia Creary, a 911 dispatcher, stands for a portrait outside her station house, in the Bronx borough of New York. (Photo: AP)

The coronavirus crisis is taxing New York City’s 911 system like never before.

Operators pick up a new call every 15.5 seconds. Panicked voices tell of loved ones in declining health. There are multitudes of cardiac arrests and respiratory failures and others who call needing reassurance that a mere sneeze isn't a sign they've been infected.

The system is so overwhelmed, the city has started sending text and tweet alerts urging people to only call 911 “for life-threatening emergencies.”

As the city staggered through its deadliest week of the pandemic, its emergency response system and army of operators, dispatchers and ambulance crews is being pushed to the brink.

The fire department said it has averaged more than 5,500 ambulance requests each day — about 40% higher than usual, eclipsing the total call volume on Sept. 11, 2001.

“When you hang up with one call, another one pops in,” said 911 operator Monique Brown. “There’s no time for a minute’s rest.”

Between the torrent of calls and so many requiring immediate intervention, like IVs and breathing tubes, it's taking longer for help to arrive.

The fire department said response times for the most serious calls have been averaging more than 10 minutes, up from about 6½ to 7 minutes under normal circumstances. People with mild symptoms or a minor injury could wait hours.

Operators begin each 911 call in the nation’s largest city with the same question: “Do you need police, fire or medical?” Then they evaluate the call's urgency, prioritizing them on the fly.

The fevers and coughing that crowded the city’s 911 lines early in the crisis have given way to frantic calls about grave illnesses. Creary said she’s noticed cardiac arrest calls spike. Some people call back within hours to report symptoms suddenly worsening.

“The worst thing is taking a call and hearing somebody screaming because their loved one has stopped breathing or they’re in distress and they don’t know what to do,” said Creary, who's also an EMT. “You just feel utterly helpless.”

‘WE CAN NOT HANDLE THIS’

After the 911 operator, medical dispatchers like Creary take charge. They find an ambulance to respond and act as a liaison between crews in the field and the hospitals.

Hospitals swamped by the surge of patients sometimes make ambulances line up outside, with crews waiting upward of 40 minutes to hand over a patient.

Creary said twice in recent days hospitals have told her to divert ambulances elsewhere. A nurse she alerted about an impending arrival pleaded: “We cannot handle this. We have no beds. We have no oxygen. We have no equipment. They cannot come here.”

The federal government sent 250 ambulances and 500 EMTs last week to supplement the city’s fleet. The fire department has deployed seven rapid-response vehicles, manned by firefighters, to the Bronx to provide care until an ambulance arrives.

Kailayanathan, a paramedic responding to more than a dozen calls each day, stepped off his ambulance tired, hungry and emotionally drained after another 16-hour day.

Nearly every patient he saw on a recent 7 a.m. to 11 p.m. shift needed to be hospitalized and hooked up to a ventilator. Some patients have had to be resuscitated in the back of the ambulance.

The state has instituted a triage protocol that instructs ambulance crews to question patients from a distance to screen for symptoms before initiating an examination with protective gear.

Kailayanathan’s assignment varies depending on where the dispatch system detects a surge in calls. Two weeks ago, he was in Queens, the borough hit hardest by the disease. Last week, he was shuttling patients to Lincoln Hospital in the Bronx.

The daughter of an elderly woman Kailayanathan treated pleaded to ride with her, but to curb the spread of the disease, family members are no longer allowed in ambulances and hospitals have banned visitors.

“There’s a good chance that the daughter is not going see her mother again,” he said. “That’s just really, really draining.”

‘NO WAY TO AVOID IT’

At least 688 EMS workers and other fire department employees have tested positive for coronavirus. A paramedic, Christell Cadet, has been in intensive care for three weeks. Throughout the city's emergency response system, workers fear they'll be next.

Kailayanathan said he’s only been drinking water on the job, cautious about eating and somehow introducing the virus into his body.

There is no sink in the ambulance to wash hands, so he mainly uses hand sanitizer. After his last run, he showers twice — at work and again at home. Then he has his first meal since 6 a.m.

Kailayanathan worries about infecting his elderly parents. Creary is looking into a temporary living arrangement so she doesn’t bring the disease home to her elderly mother.

The union for 911 operators is demanding that the police department, which runs the call centers, space workers out to protect their health. Instead of social distancing, they’re “sitting on top of each other,” said Alma Roper, of District Council 37’s Local 1549.

The NYPD said it is doing “all it can to promote social distancing” at call centers, including seating operators at every other call-taking position, cleaning workspaces at least twice per shift and, starting Saturday, screening workers’ body temperature and directing them to see a doctor if it’s higher than 100.4 degrees (38 degrees Celsius).

“For us, it’s not an if, it’s a when. When are these symptoms going to start? When are we going to start getting sick?” said Creary. “Because there’s no way to avoid it.”