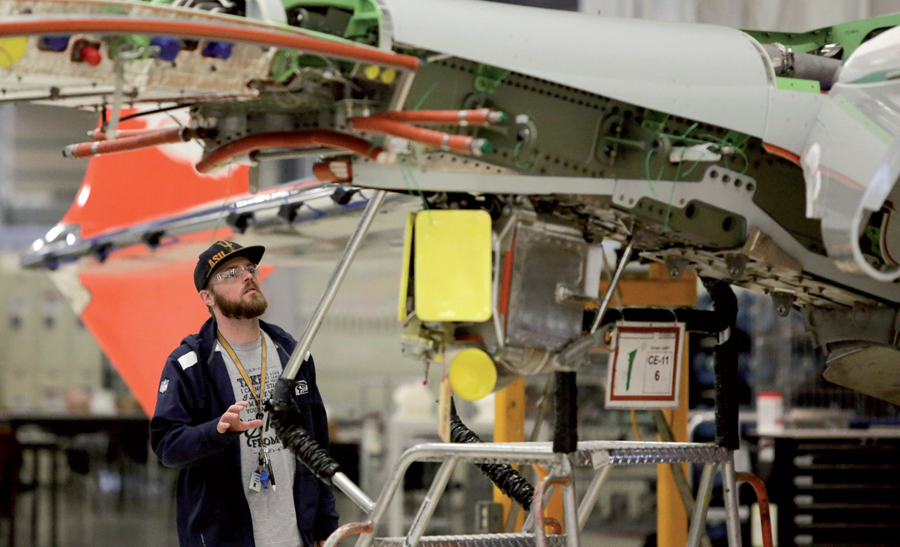 A Boeing worker is pictured working in the wing system installation area at the company’s factory in Renton, Washington in February 2017. (Photo/Agencies)

Beyond Boeing, state's economy hinges on exports, trade with China

The Boeing Co becomes a focus of attention whenever the US and China threaten tariffs on exports between the two countries. It's not just that the iconic American manufacturer of aircraft has a lot at stake in any tariff dispute, so does the state of Washington, where its aircraft are manufactured.

History and economic development have enabled Washington state to create one of the highest levels of engagement with China of any US state. And while Boeing is a major player in that relationship, the state's economy has other sectors that depend on Sino-US trade.

Washington has an export-dominated economy, and China was its top export market in 2017, according to data from the US Census Bureau. The state exported goods and services worth $76.4 billion last year, and China accounted for nearly $18 billion of that amount.

"China is a huge and important market for Washington so that any problems experienced by Boeing would probably be felt by other key elements of the (state's) economy," said Spencer Cohen, senior economist at Seattle-based consulting firm Community Attributes Inc, in an interview.

Boeing's history with China dates back to 1916. The first engineer Bill Boeing hired was China-born Wong Tsoo, who helped design the company's first commercial success --- the Model C bi-wing airplane. The Boeing-China relationship has been mutually beneficial for both sides and has expanded. One of every four planes Boeing currently assembles in the Seattle area goes to China.

While Microsoft, Amazon and Starbucks have become major players in the state's economy, Boeing remains a significant contributor.

"They are still a huge factor for the region. But the region has become more diversified, especially with the tech industry," Cohen said.

Boeing employs about 69,000 in Washington state and virtually all are in the Seattle area, noted Cohen. He said most of the company's workers are well compensated; the average salary is $110,000. Although Boeing enjoys a preferential tax rate from the state, Cohen said the company and its employees contribute heavily to state sales tax revenue, which is important because Washington doesn't have a state income tax.

In retaliation for US President Donald Trump's proposed $50 billion in tariffs on Chinese-made products, China said it would impose tariffs on $50 billion worth of American products, including some aircraft.

However, Michael Boyd, president of aviation industry consultancy Boyd Group International in Colorado, said that the tariff specifications for aircraft are based on aircraft weight.

"They fall short of the planes that are being sold to China (by Boeing). So the tariff announcement looks good, but it affects smaller airplanes that are not being bought anyway," he wrote in an email.

Boyd suggested that China really doesn't want to curtail Boeing shipments to the country. "Let's keep in mind that if China really did choke off the aircraft that they are buying, the damage would be mainly to the Chinese airline industry which needs airplanes to meet demand," he said.

"We remain buyers of the stock based on our view that the tariff talk is more headline risk in the near-term but unlikely to impact BA's (Boeing) current China backlog and/or long-term demand from China," said Peter Arment, an analyst with Baird in an email and research note on the company.

Boeing did not respond to a request for comment.

The WSCRC is one of the leading state-level associations focused on China relations in the US. T. Andrew Wilson, the group's chairman, said the fallout for the US economy from the Sino-American trade dispute will probably occur first in Washington state.

"Our state has one of the largest export economies in the US," Wilson said in an interview. "Even though Boeing is the main driver of trade with China, there are other sectors of the Evergreen State's economy that could feel a draft from a trade storm."