WORLD Traders trickle back to Wall Street after pandemic confinement

Traders trickle back to Wall Street after pandemic confinement

The life of a Wall Street trader was once one of business trips and work dinners, but now it is anything but.

The culprit, as with so many of the economic and financial disruptions the United States has faced over the past months, is the coronavirus pandemic, which has rendered life for the brokers, bankers and businesspeople fueling the world's largest economy much more lonely. 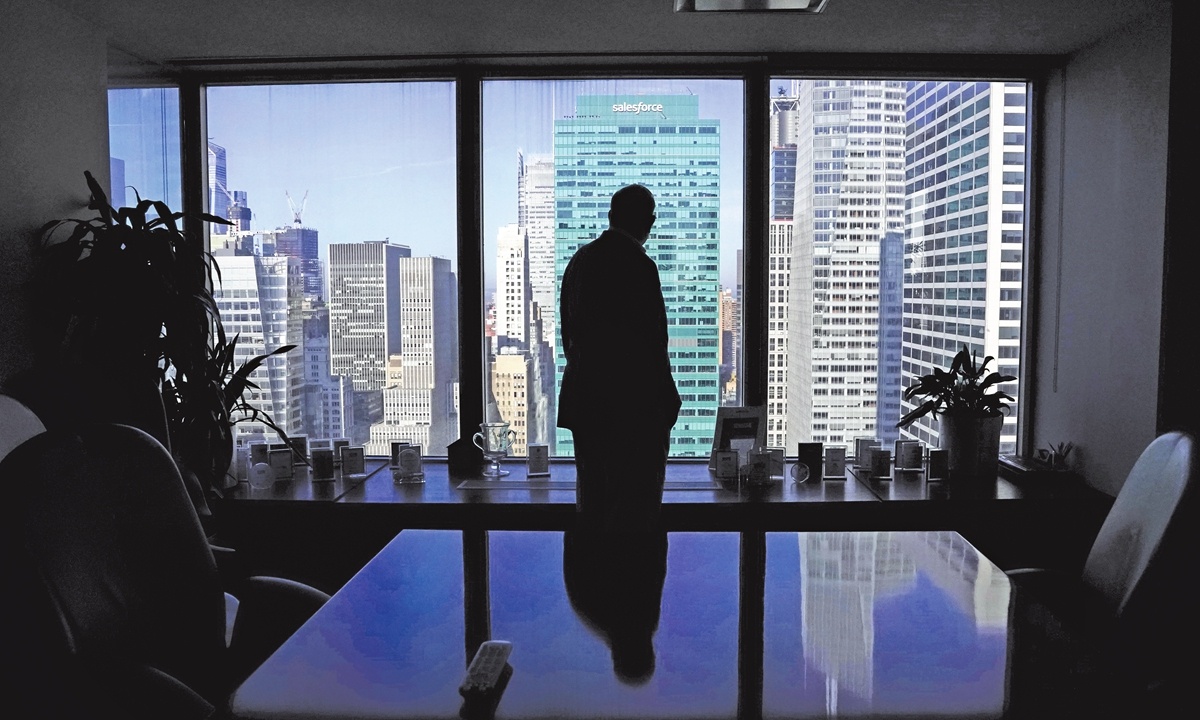 Daniel Alpert, managing partner of Westwood Capital, is seen in his office on Fifth Avenue in New York, the US on Thursday. Photo: AFP

People working on high-priced transactions like IPOs, bond deals or mergers and acquisitions "used to travel a lot to meet with clients" who would typically only sign agreements in person, recalls Karl Haeling of LBBW bank.

"Now they would very happily give mandate without seeing you," said Haeling.

Wall Street sits in the heart of New York City, an early epicenter as the US COVID-19 outbreak turned into the world's worst, with more than 218,000 deaths and 8 millions cases nationwide as of this week.

The pandemic's intensification in March temporarily cleared the market makers from the New York Stock Exchange's boisterous floor and forced traders across Wall Street to retreat indoors, relying on their phones, email and instant messaging systems to talk with clients.

"People are doing brainstorming on these various video platforms and they are coming up with product ideas remotely," said Daniel Alpert, founding managing partner at investment bank Westwood Capital. But that hasn't held indices back: The Nasdaq and S&P 500 have both recovered from their massive plunges in March, while the Dow has also regained most of its strength, though millions remain jobless and unemployment is at a high 7.9 percent.

Aided by a secure internet connection, Haeling holds 30-minute meetings twice per day to keep up with colleagues about the markets, politics and the omnipresent coronavirus threat, a work-from-home routine he says suits him fine.

"I went back [to the office] for three days in the summer because of a storm which cut the power out at home, and I realized how inefficient it is because I spent three hours on the train," Haeling said.

But even with the virus still a threat across the US, traders are slowly trickling back to Wall Street.

The New York City Economic Development Corporation estimates that there are 460,000 people employed by the financial sector in the city, and their work is considered an essential service under state law.

The New York Stock Exchange reopened in May with traders donning masks and separated by plexiglass, while Alpert started working from his office again at the end of June.

But rather than the 15 or so people who usually show up to his office, it's just Alpert and occasionally another partner.

Earlier in October, he attended his first in-person business lunch since the coronavirus' arrival, "outside, of course," and closed a recent deal with around eight people in the same room.

"There are just some times when you really do need the high speed interaction," he said.

BNP Paribas, which had a few cases of employees testing positive for the virus or suspecting they had it, has let about 10 to 15 percent of their staff return.

Visitors are banned in the office, but in a tour given to an AFP journalist over live video, traders could be seen scattered over a long line of desks and separated by plexiglass, with floor markings encouraging people to socially distance.

"Anything is on the table to give our employees flexibility," said Kevin Abraszek, the bank's head of human resources change and transformation.

Staff at other banks have returned as well. JPMorgan Chase asked all its heads of brokerage and sales divisions who were still teleworking to return to the office by the middle of September, with exceptions for medical conditions or childcare needs.

But only about 20 percent of its employees show up, and those reporting to the office often differ by the day.

At investment bank Goldman Sachs, about 30 percent of staff are in the office.

Outside of Lower Manhattan's skyscrapers, there's no doubt that the neighborhoods aren't back to their former selves.

Traders in their uniforms of sleeveless fleece vests no longer flock Wall Street each morning, and industry officials acknowledge it may take a while longer before normalcy returns.

"We are trying to instill a longer-term new... working culture in which working from home will remain part of what we do," Abraszek said.

"It is just a question of how much that will be."