Trading persons for prosperity -- America's 'legacy of sleaze' lives on

The U.S. State Department recently released its annual "Trafficking in Persons Report," dividing countries worldwide into tiers based on how well America thinks they have tackled the crime. 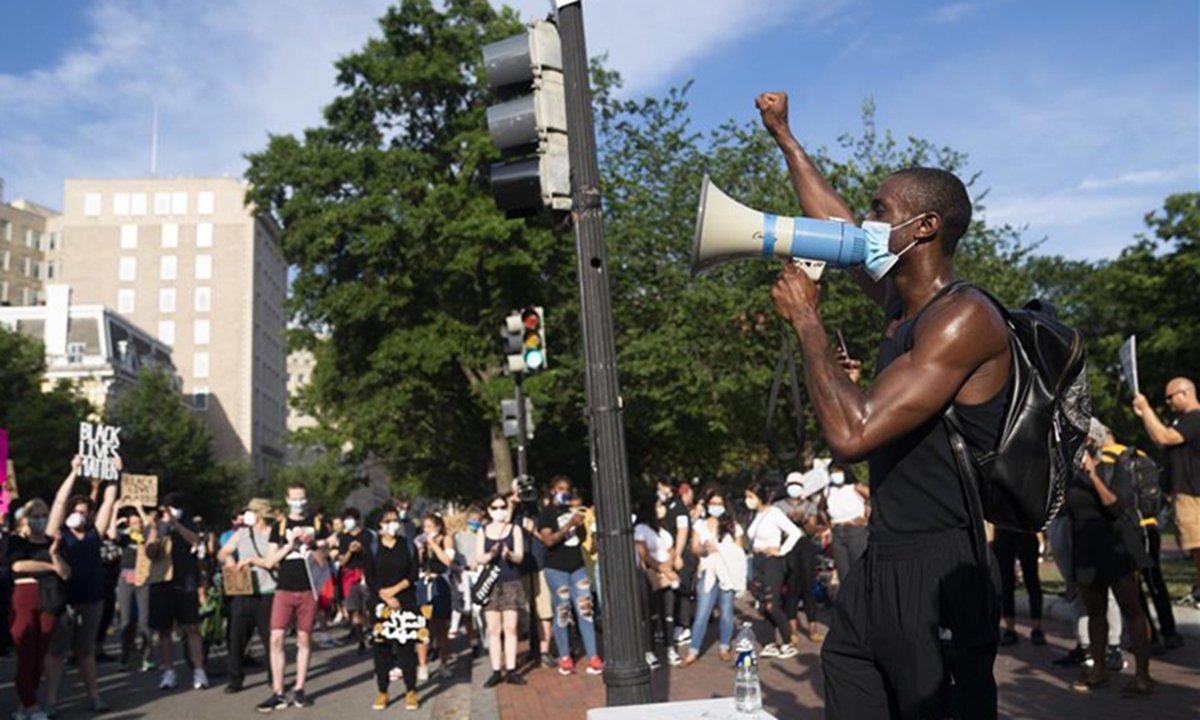 Demonstrators protest against racial injustice to mark Juneteenth, commemorating the end of slavery in the United States, near the White House in Washington, D.C., the US, June 19, 2020. (Photo: Xinhua)

Replete with double standards, the report blasts the human rights records of other countries while downplaying the atrocities of modern slavery at home.

But the facts speak for themselves. The United States has long traded persons for its prosperity. The country is a self-proclaimed "human rights defender" with a shameful "legacy of sleaze" that lives on today.

The institution of slavery is widely seen as a fundamental part of America's prosperity. From southern inland tobacco plantations to shipbuilding plants in coastal New England, U.S. industries supported slavery and were nurtured by it for centuries.

"Out of slavery ... grew nearly everything that has truly made America exceptional: its economic might, its industrial power ... its astonishing penchant for violence," commented The New York Times Magazine in 2019 in an issue marking the first enslaved Africans arriving in the British colony of Virginia in 1619.

It's estimated that from 1525 to 1866, more than 12.5 million Africans were shipped to the New World, with the Thirteen British Colonies, later the nascent United States, being a key market, according to Trans-Atlantic Slave Trade Database.

Numerous people died during the brutal maritime transport, while about 10.7 million having survived and landed in the Americas, only to be sold into slavery.

Though the United States banned the importation of slaves in 1808, growing demand for slave labor in the cotton industry had fueled the domestic slave trade. Meanwhile, the cross-Atlantic trade went on covertly.

"The system proved itself so lucrative that law and legal precedent began to leave future governments leeway for prioritizing the economy over morality," according to the website of James Madison Montpelier, a national historical landmark.

By 1850, 80 percent of American exports were the product of slave labor. A decade later, "the nearly 4 million American slaves were worth some 3.5 billion U.S. dollars, making them the largest single financial asset in the entire U.S. economy," David Blight, a historian at Yale University, was quoted as saying by The Atlantic.

The American Civil War brought legal slavery to an end in 1865, but the country still had to confront the widespread presence of similar practices.

As Jim Crow laws -- local statutes of racial segregation -- were enacted in the southern states, racial repression and exploitation stretched into the 20th century, reducing the entire black population to decades of second-class citizenship.

"All men are created equal," stated the Declaration of Independence in 1776, a founding document of American values, something so "self-evident" that it was not until the 1960s that legal systems granted black Americans equal rights.

This year, the United States has applied the same old twisted logic by ranking itself as a top performer in the annual trafficking report.

It's a common misconception among U.S. citizens that trafficking is just "a problem in other countries," as the term comes with an impression that the pattern is transport-based, Luis Cabeza deBaca, former U.S. anti-trafficking ambassador-at-large, has said.

However, massive data, cases and personal accounts attest that the United States has long been -- to put it in the U.S. State Department's own words -- "a source, transit, and destination country" of adult and minor victims, both at home and abroad.

An estimated 403,000 people in the United States were kept for modern slavery in 2016, either in forced labor or sex trafficking, according to the Global Slavery Index published in 2018 by Australia's Walk Free Foundation.

According to nonprofit organization Polaris, the U.S. National Human Trafficking Hotline handled more than 5,700 cases in 2015. Four years later, that number doubled to 11,500.

Such cases have been reported in restaurants, cleaning services, construction and factories, many of which appear to be legal businesses.

In 2019, federal prosecutors sued 12 hotel groups, including Hilton Worldwide Holdings and Intercontinental Hotels &Resorts, claiming that they knowingly ignored signs of women being sold as sex slaves. Some even reported profiting from sex trafficking.

Nonprofit organization DeliverFund reported last year that there are 15,000 to 50,000 women and children coerced into commercial sex annually in the United States.

"The United States is the number one consumer of sex worldwide. So we are driving the demand as a society," Geoff Rogers, co-founder of the United States Institute Against Human Trafficking, told Fox News.

The day of legal slavery in the United States is long over, yet its dark past of threats, violence, fraud and coercion to exploit people for labor or sex remains.

Slavery is not merely a relic, but a problem "alive and well. It has simply taken on a new form," said Laurel Fletcher, a law professor at the University of California, Berkeley.

In 2007, American citizen Rory Mayberry testified that a U.S. government contractor that he had worked for was involved in using forced laborers during the reconstruction of the U.S. Embassy in Baghdad.

Mayberry said the employer once asked him to bring 51 Filipino workers to the Iraqi capital via a transit flight.

But the plane landed elsewhere. "All of our tickets said we were going to Dubai," Mayberry was quoted as saying by The Washington Post.

Upon arrival, he was told by a manager not to disclose the real destination. He also noticed that the workers' passports had been taken away.

Like the Filipinos, legions of people from all corners of the world are either coerced or lured into forced labor by false promises, VOX news reported in 2015.

Chrissey Buckley, a graduate alumnus at the University of Denver, has found that an existing market and poor legislation combined with inefficient laws allow the problem to persist.

The most prevalent industries are "sex services, domestic servitude, agriculture, sweatshop, and factory work," she wrote in a research paper on contemporary slavery published in 2008.

Researchers have found that there are hundreds of thousands of people working against their will in the agriculture sector alone, and some victims even had college backgrounds, said the VOX report.

Anti-Slavery International describes them as "some of the poorest paid and most exploited workers within the U.S. economy," who are deprived of such rights on the job as health insurance, sick leave, pensions, or job security.

A more compelling fact is that 71 percent of victims of forced and coerced labor enter the United States on legal visas, and over a third of all victims work in domestic servitude and live with their employers, according to a study in 2014 by the Urban Institute and Northeastern University.

Migrants and refugees are particularly vulnerable to various forms of labor trafficking and related inhumane treatments.

Amid increasingly tightened U.S. immigration polices and reckless law enforcement, more than 850,000 immigrants were detained at the U.S.-Mexico border in fiscal 2019, and an unprecedented 69,550 migrant children were held in U.S. government custody away from their caretakers, according to media reports and official data.

The separation reached its height after the U.S. government enacted a zero-tolerance policy for illegal entry in 2018, igniting an urgent humanitarian concern.

Stressing that children should never be held in immigration detention or separated from their families, United Nations High Commissioner for Human Rights Michelle Bachelet said in 2019 that she was "deeply shocked" that the children are forced to sleep on the floor in overcrowded facilities, lacking adequate healthcare, food and sanitation.

Last year, about 40 women from Latin America and the Caribbean who were held at a detention center in the state of Georgia sued U.S. Immigration and Customs Enforcement for undergoing unnecessary and non-consensual gynecological surgeries, including uterus removal, which they said caused severe physical and mental harm.

"Modern slavery doesn't come with the iron chains and auctions of the past. Today's restraints take the form of withheld documents, the possibility of exposure, and the threat of deportation," Aryn Baker, a Times magazine correspondent, wrote in 2019, asking for more inclusive U.S. immigration policies to bring an end to the humanitarian crisis.

The COVID-19 pandemic has added a new layer of tragedy to medically vulnerable detainees, as they are more likely to be infected with the virus due to dense gatherings and a health supplies shortage.

"It was a very uncomfortable and very ugly situation that I went through," said 38-year-old Guatemalan Heraldo Malumbrez, who had been in immigration detention in the state of Arizona for more than three months before being infected with COVID-19 in July 2020.

"We are talking systemic cruelty (with) a dehumanizing culture that treats them like animals," Democratic House Representative Alexandria Ocasio-Cortez tweeted in 2019.