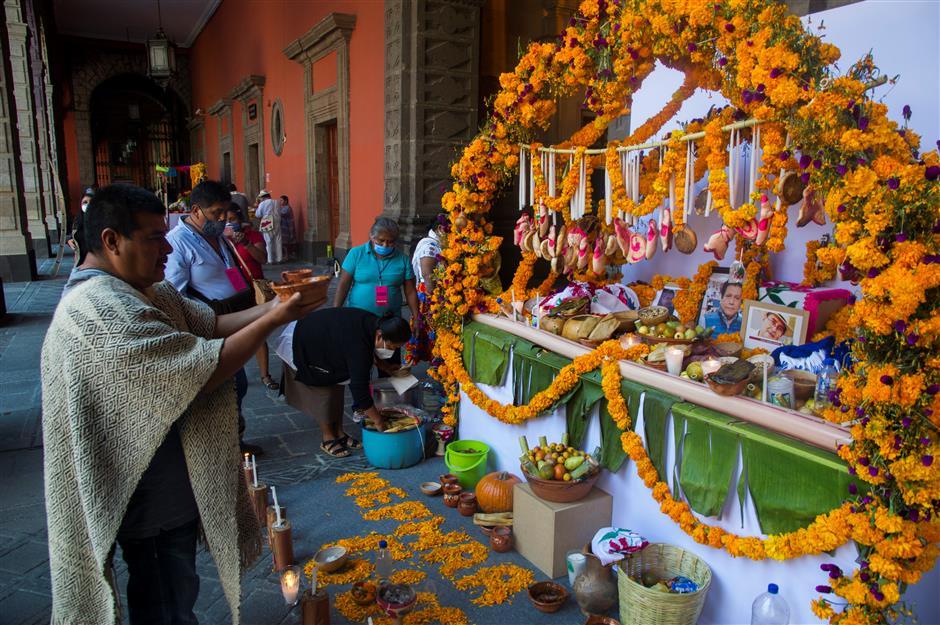 A man performs a ritual at an altar during a tribute called “A flower for each soul” to the victims of the COVID-19 pandemic, at the National Palace in Mexico City, on Saturday. (Photo: Agencies)

In Mexico death is usually a cause for celebration during the Day of the Dead festival, but this year parades are canceled and cemeteries closed due to the coronavirus pandemic.

From November 1-2, people across the country normally deck their homes, streets and relatives’ graves with flowers, candles and colorful skulls.

The traditional festival centers around the belief that the living and the dead can commune during the brief period. With its bright colors and cartoonish skeleton costumes, the Day of the Dead has become an internationally recognized symbol of Mexican culture.

But this year the authorities have urged people to stay at home to avoid spreading the coronavirus, which has killed more than 90,000 people in Mexico — one of the world’s highest tolls.

Many families will remember those who have passed away in the privacy of their homes.

Janet Burgos decorated an altar with confetti, fruit and a photograph of her mother Rosa Maria who died in June aged 64 from suspected COVID-19.

“Now I begin to see what the Day of the Dead really represents,” the 41-year-old said, adding her mother had asked the family  not to cry.

“I want everyone to be happy, to have a party because I died. Life goes on,” Burgos remembers her mother telling her.

The Day of the Dead, which is widely considered to be Mexico’s most important festival, is rooted in the indigenous Mexica culture, mixed with Christian superstition brought by Spanish colonizers.