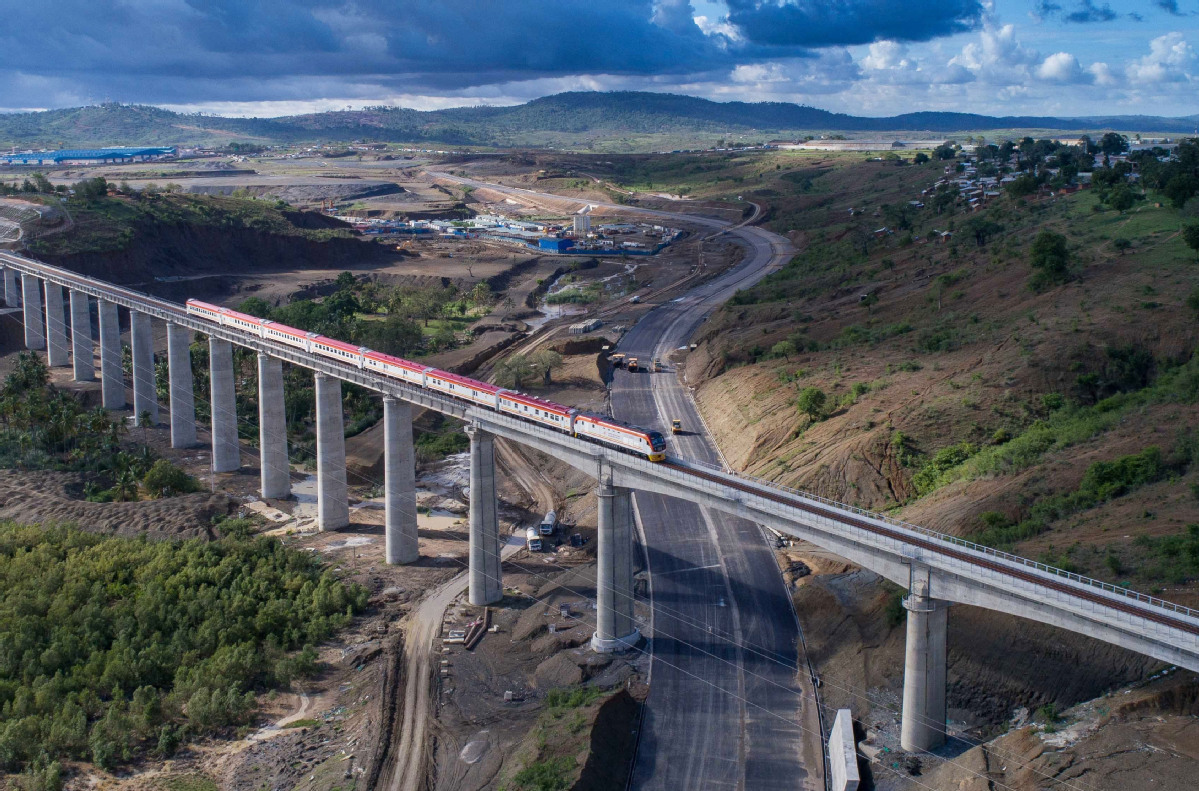 A passenger train is seen on a bridge of the Chinese-built railway linking the Kenyan capital Nairobi with Mombasa and Naivasha in 2017. (Photo: Xinhua)

Nairobi, Kenya's capital city, is known for its perennial traffic jams. However, this might not be the case for long.

Under a Build-Operate-Transfer contract between the China Road and Bridge Corporation, or CRBC, and the Kenya National Highways Authority, construction of a 27.1-kilometer expressway has begun. The route starts in the town of Mlolongo and ends at the junction of James Gichuru Road and Waiyaki Way in the city's west end.

Ren Wenfeng, CRBC's general manager of the expressway project, said the $600 million project is in line with the aim of Kenya's Vision 2030 to create a globally competitive and prosperous country.

He added the Nairobi Expressway, the main artery for transportation of domestic passengers and goods, will significantly alleviate traffic congestion in Nairobi. This will make traffic from Nairobi Central Business District to the Jomo Kenyatta International Airport and its southern area more convenient and efficient.

Ren said the Nairobi Expressway will consequently decongest and mitigate accidents along the busy A109 highway that connects Nairobi and the port city of Mombasa.

"The project is expected to be completed in the first half of 2022. Once complete and operational, the Nairobi Expressway promises to offer beautiful scenery as you commute across the Green City in the Sun, further enabling the process of modernization," Ren said.

"The project, with its strategic dual-carriage and exit routes, will considerably ease traffic flow and reduce travel time through Nairobi," he added.

The expressway, with 18.2 km on ground and 8.9 km elevated, is a class A standard, state of the art fourlane dual carriageway, with a design speed of 80 kilometers per hour.

Ren said in order to save construction space and mitigate the impact on the current traffic in central areas during the construction period, CRBC adopted a construction process where they prefabricate piers and bent cap in the factory and transport them to the site for installation.

This technique is not only a first in Kenya but has seen the construction pace pick up without interfering with the normal traffic flow.

In addition to employing more than 3,400 local youth, the project allowed the youth to gain on-site training and experience due to exposure to diverse construction techniques implemented in the iconic project.

"We anticipate the creation of about 500 job opportunities for the local youth, most especially those graduating from polytechnic and tertiary universities," Ren said.