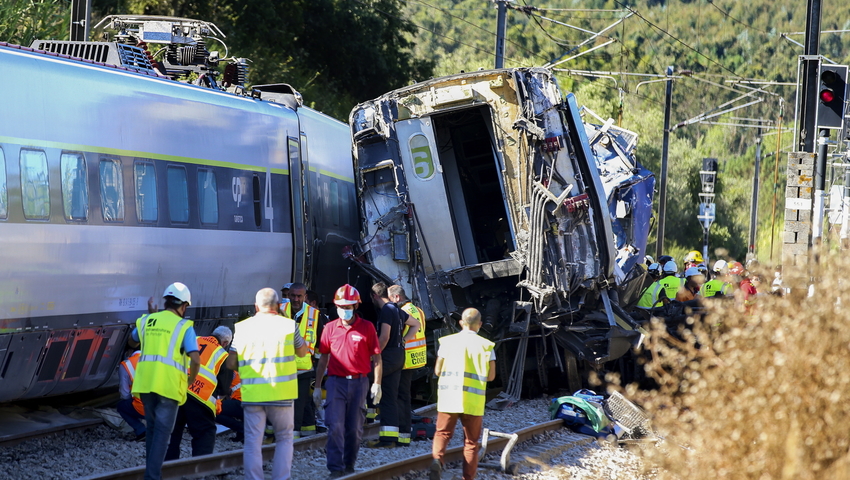 LISBON, July 31 (Xinhua) -- A high-speed train with 212 passengers that left Lisbon for northern Portugal's city of Braga collided with a railroad maintenance vehicle on Friday near Coimbra in central Portugal, killing two people and injuring 50 others, according to Coimbra District Operations Command (CDOS).

The two fatal victims in the accident were workers of the Portuguese National Railway Network (REFER) against whom the passenger train collided, said the company's Coimbra District Operations Commander Carlos Luis Tavares.

One of the most seriously injured persons was the train driver and was taken to the emergency operating room, according to Portuguese news agency Lusa.

"We have already evacuated ten victims to different hospitals. We no longer have any passengers on the train," Carlos Luis Tavares said, adding that passengers will undergo medical screening.

According to Paula Neto, a doctor at the National Institute of Medical Emergency of Portugal (INEM), there were two children among the slightly injured.

Portuguese President Marcelo Rebelo de Sousa lamented the "serious railway accident" in the afternoon and offered "heartfelt condolences to the relatives and friends of the victims," wishing "quick improvements to the many injured."

The head of state said he would "await the results of the technical and judicial investigations" and promised to visit the most seriously injured, hospitalized in Coimbra, over the weekend.

"The investigation that is underway is important, particularly because it involved a very high number of Portuguese," he said.

Meanwhile, Prime Minister Antonio Costa expressed his "most heartfelt condolences to the families and friends of the victims of the tragic accident."

He said on Twitter that he is "monitoring the evolution of the situation" and indicated that "an investigation has already been opened to quickly investigate the causes and responsibilities of this serious accident."

The Office for the Prevention and Investigation of Aircraft Accidents and Railway Accidents in Portugal (GPIAAF) has already been called and confirmed that it will investigate the case.