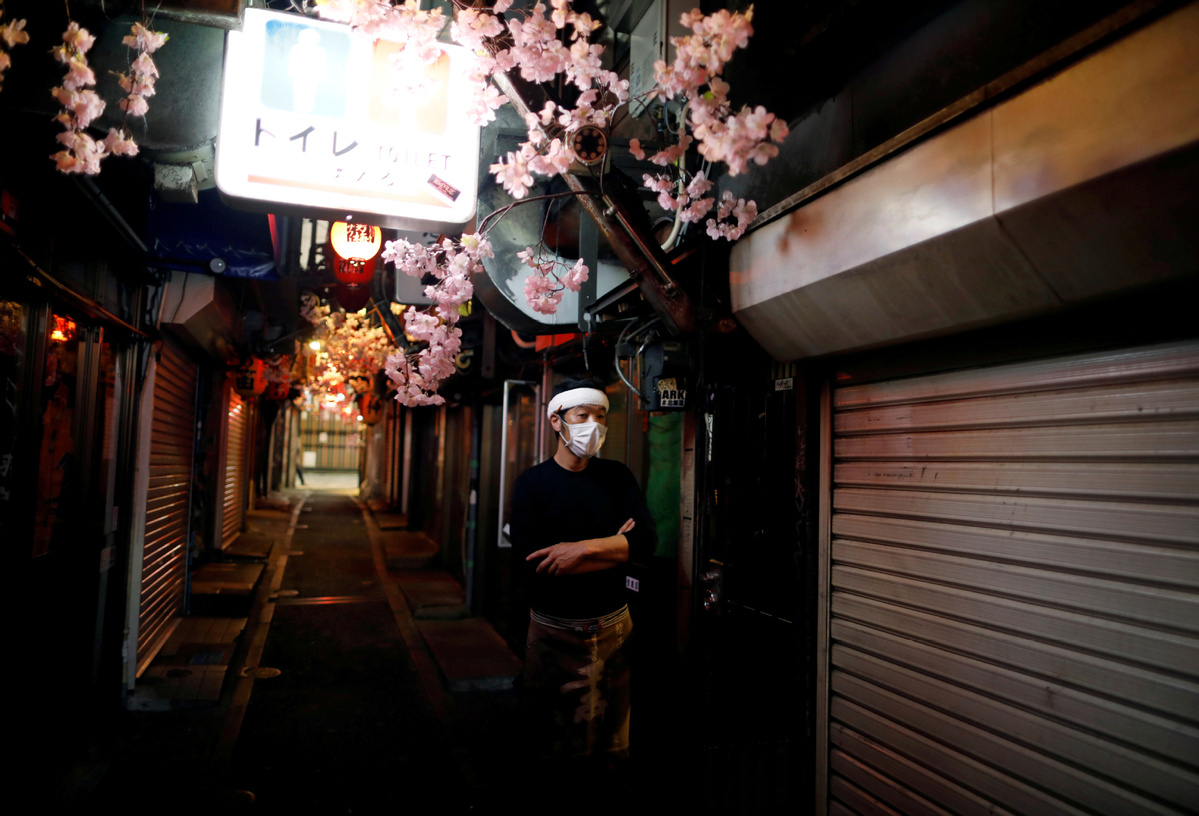 A staff member of a restaurant wearing a protective face mask stands at almost empty and temporary closed Japanese drinking bars' alley after the government announced the state of emergency for the capital following an outbreak of the COVID-19 at Shinjuku district in Tokyo, Japan, April 8, 2020. (Photo: Agencies)

A group of volunteers organized by the China-Japan Friendship Hospital in Beijing hopes to contribute to the global fight against the novel coronavirus not by medical methods but by using their bilingual skills.

More than a dozen volunteers from all walks of life have translated Chinese documents related to the virus fight into Japanese.

Almost all countries have been affected by the pandemic. Besides the virus itself, many are forced to deal with a second challenge: finding reliable data buried in massive amounts of information, a lot of it erroneous, that spreads worldwide faster than the virus itself.

The Director-General of the World Health Organization, Tedros Adhanom Ghebreyesus, has referred to this as an "infodemic".

"In times like these, relying on official channels is the smart way to limit panic," said Meng Huachuan, project manager of the international medical exchange and cooperation office at the China-Japan Friendship Hospital, who is also the organizer of the translation project.

"Many people from Japan have offered a helping hand since the outbreak hit China," Meng said, adding that as the virus has swept the globe, many countries are expected to collaborate and overcome communication barriers to make sure all citizens receive correct instructions, regardless of the languages they speak.

"China's experience in fighting the epidemic will be of great reference value to Japan. That's why we have organized interpreters and translators to work closely with public authorities and health care providers to facilitate vital information exchange."

Translators have taken part in the fight against the virus since the early stages of the outbreak. Meng said he issued a call for volunteers in February, and within three days he had received many replies.

"Among the volunteers are Chinese medical workers, employees of Japanese companies in China, and Japanese students studying in China. It took them less than a week to translate into Japanese the latest COVID-19 diagnosis and treatment plan issued by the National Health Commission."

The documents translated by these volunteers were mainly guidelines on diagnosis and control for the novel coronavirus issued by experts of the National Health Commission of China.

Meng said these documents reflect a deeper understanding of the clinical manifestations and pathological features of the disease and the accumulation of expertise in diagnosis and treatment.

The translated version of the guidelines has been sent to the Japanese Medical Association and nearly 70 Japanese universities and medical institutions, helping Japan to gain a better understanding of the virus while drawing on the Chinese treatment scheme.

Meng said that after receiving these documents, the Japanese had expressed gratitude to the Chinese volunteers and spoke highly of China's guidelines and medical treatment expertise.

The plan has been updated six times since its publication, with many effective treatment measures and considerable information added to it to improve the treatment.

Yang Mingyue, another organizer of the translation project and a founder of Beijing Huayirisheng, a company that promotes medical exchanges between China and Japan, said keeping up with the new information and translating any further detail that can help people protect themselves is one of the challenges the volunteers face.

"It's often a race against time because the purpose is no longer to create awareness but to prevent the virus spreading and solving a global crisis."

Another challenge is the difficulties in dealing with the complicated medical terms, Yang said.

"Time is tight and the tasks are tough. Our volunteers usually browse a great deal of information and seek advice from native speakers to better express things."

Junko Yoshikawa, 62, a Japanese PhD candidate at the Nanjing University of Chinese Medicine, plays an important role in the translation project. In addition to proofreading, Yoshikawa tries to ensure that Japanese doctors will understand medical terms in the document.

"The medical system in Japan differs to that of China, and many expressions and terms are different. For my Japanese colleagues to understand the Chinese guideline I need to read a lot of literature and do a lot of research."