WORLD Travel warnings issued as rubella breaks out in Japan

Travel warnings issued as rubella breaks out in Japan 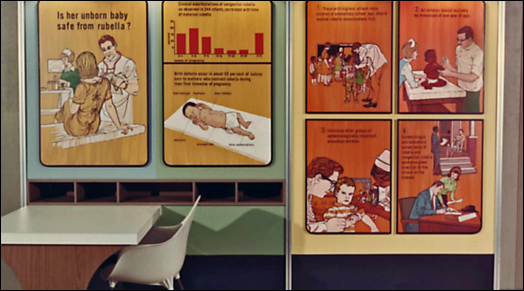 This display released in 1964 used to educate people about the importance of rubella vaccination and the mother to fetus transmission of this virus.(Photo: VCG)

The number of cases of rubella infections in Japan this year spiked to more than 1,100 cases, nearly 12 times higher than that of last year, Xinhua reported. More than 70 percent of these cases were recorded from Tokyo and its surrounding prefectures, the National Institute of Infectious Diseases (NIID) maintained.

In an advisory, the US Centers for Disease Control (CDC) warned rubella is dangerous for pregnant women and their developing babies. “Pregnant women who are not protected against rubella through either vaccination or previous rubella infection should not travel to Japan during this outbreak,” the advisory said.

In case a pregnant woman gets infected with the rubella virus, her baby has a high chance of developing issues such as deafness, cataracts, heart defects, mental disabilities, and organ damage. “Travelers to Japan should make sure they are vaccinated against rubella with the measles, mumps, and rubella vaccine before travel,” CDC suggested.

HKSAR also issued a similar warning. In a circular issued on Tuesday, HK's Center for Health Protection (CHP) said, “people who intend to travel to Japan are advised to review their vaccination history and past medical history.”

“All pregnant women and women preparing for pregnancy who are non-immune to rubella should not travel to Japan during the outbreak period,” the circular added. The CHP recorded six cases of rubella infection this year. It includes four females and two males.

According to Xinhua, there was a significant outbreak of the virus in Japan with more than 16,000 people being infected in an epidemic during 2012-2013. Of the 45 babies who developed congenital rubella syndrome, 11 of them died.

With better coverage from vaccines, globally reported rubella cases have declined by 97 percent from 670,894 cases in 2000 to 22,361 cases in 2016. However, getting the vaccines to the poor regions of the world is still a challenge. “CRS rates are highest in the African and South-East Asian regions where vaccine coverage is lowest,” World Health Organization (WHO) maintains.

In the last few months, Japan faced a series of natural disasters -- floods, earthquakes, typhoon and an intense heat wave -- which severely impacted the number of foreign visitors to the country.