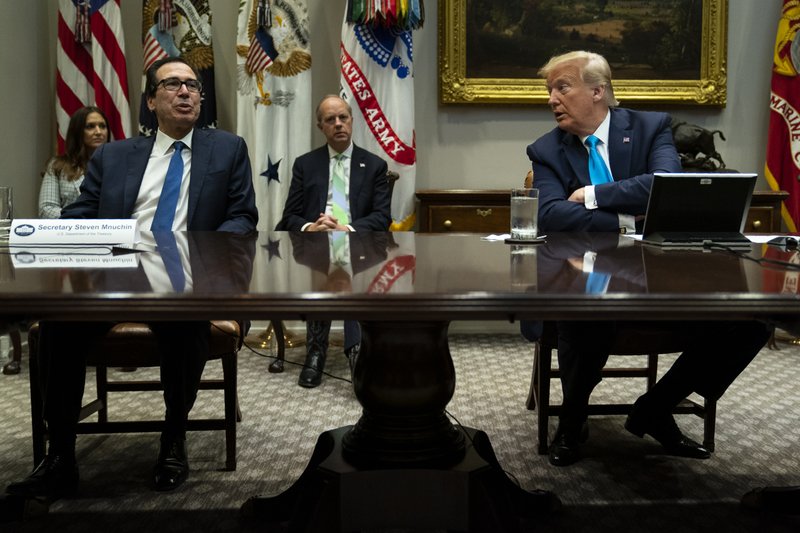 President Donald Trump listens as Treasury Secretary Steven Mnuchin speaks during a conference call with banks on efforts to help small businesses during the coronavirus pandemic, at the White House, Tuesday, April 7, 2020, in Washington. (Photo: AP)

But the acting inspector general for Treasury, Rich Delmar, also said he had no opinion on whether the advice Mnuchin followed — which came from Justice Department attorneys — was itself well-founded. In refusing to hand over the returns, Mnuchin decided he was legally bound to comply with that advice, Delmar noted in a letter Wednesday to senior House lawmakers.

The Justice Department's legal opinion backed Mnuchin’s refusal, saying that Neal’s request lacked a legitimate legislative purpose and was an “unprecedented” use of congressional authority.

The argument is the same one Trump has used in refusing other demands from Democrats in Congress for financial records from banks and accountants that have had business with Trump and his family. Lawsuits over those records were filed in federal courts in Washington and New York.

Delmar found that Treasury processed the request properly, sought legal guidance from the Justice Department, determined that it was bound by that guidance and, based on that advice, decided not to provide the tax information.

His letter went to Neal and Rep. Kevin Brady of Texas, the senior Republican on the tax-writing Ways and Means panel.

In the long-running legal battle over Trump’s records, Neal cited a 1924 law that says the Treasury secretary “shall furnish” tax returns to any of the three congressional officers empowered to obtain them, one of whom is the Ways and Means Committee chairman.

Neal has said the records are needed because the committee is looking into the effectiveness of IRS mandatory audits of all sitting presidents.

The fight between Democrats and Trump dates back to the 2016 election campaign when Trump claimed that he couldn’t release them because he was under IRS audit. The records hold the promise of information that Trump has carefully guarded from public view, including details of his business entanglements, relations with foreign creditors and governments, and the value of his assets.