The four lawyers who prosecuted Roger Stone quit the case Tuesday after the Justice Department overruled them and said it would take the extraordinary step of lowering the amount of prison time it would seek for President Donald Trump's longtime ally and confidant. 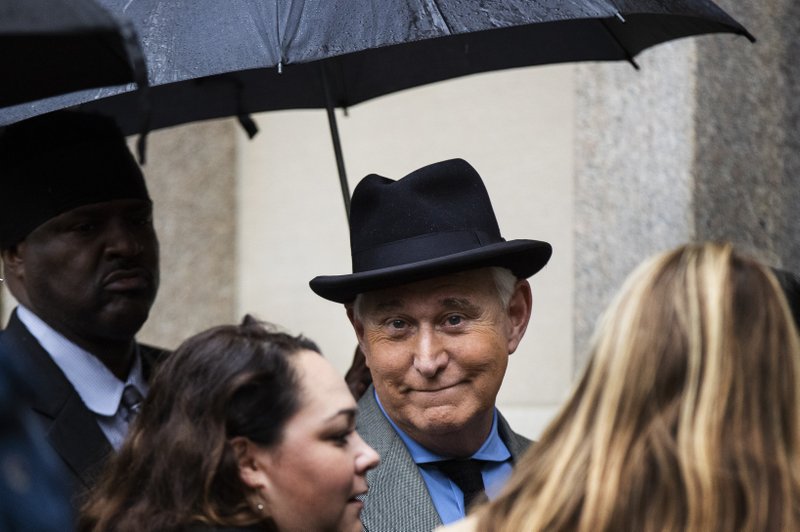 In this Nov. 12, 2019 file photo, Roger Stone, a longtime Republican provocateur and former confidant of President Donald Trump, waits in line at the federal court in Washington. A Justice Department official tells the AP that the agency is backing away from its sentencing recommendation of between seven to nine years in prison for Trump confidant Roger Stone. (File photo: AP)

The departures raised immediate questions over whether Trump, who earlier in the day had blasted the original sentencing recommendation as "very horrible and unfair," had at least indirectly exerted his will on a Justice Department that he often views as an arm of the White House.

The department said the decision to undo the sentencing recommendation was made Monday night — before Trump's tweet — and prosecutors had not spoken to the White House about it. Even so, the departures of the entire trial team broke open a simmering dispute over the punishment of a Trump ally whose case has long captured the president's attention. The episode was the latest to entangle the Justice Department, meant to operate free from White House sway in criminal investigations and prosecutions, in presidential politics.

Each had signed onto a Monday sentencing memo that recommended between seven and nine years in prison for Stone, who was convicted of lying to Congress, witness tampering and obstructing the House investigation into whether the Trump campaign coordinated with Russia to tip the 2016 election. None lent their names to a Tuesday memo that called the original recommendation excessive.

The departures leave in limbo the resolution of a case that was one of the signature prosecutions of Mueller's team and that cut to the heart of his mission — to determine whether the Trump team had access to nonpublic information about Democratic emails hacked by Russian operatives and provided to WikiLeaks.

Trump was back on the attack late Tuesday, slamming the original sentencing recommendation and questioning the judge overseeing the Stone case. "A phony Mueller Witch Hunt disgrace," he tweeted. "Caught!"

He also retweeted an online supporter's request for full pardons for Stone and former national security adviser Michael Flynn, who was found guilty of lying to the FBI. "Prosecutorial Misconduct?" Trump suggested.

The Justice Department's leader, Attorney General William Barr, has been a steady ally of the president's since taking the position. Barr last year cleared the president of obstruction of justice even when Mueller had pointedly declined to do so, and has declared that the FBI's Russia investigation — which resulted in charges against Stone — had been based on a "bogus narrative."

It's not clear what sentence the department will ultimately seek — a new sentencing memo filed Tuesday evening indicated that the original recommendation was too harsh but proposed no specific punishment of its own.

A Justice Department official said authorities decided to step in and seek a shorter sentence because they had been taken by surprise by the initial recommendation. The person, who was not authorized to discuss the matter publicly and spoke on condition of anonymity, said prosecutors had told the department to expect a recommendation for a shorter sentence.

In their revised sentencing memo, Justice Department officials argued the initial recommendation could be "considered excessive and unwarranted under the circumstances" but also said they it would defer to the court.

It is extremely rare for Justice Department leaders to reverse the decision of its own prosecutors on a sentencing recommendation, particularly after that recommendation has been submitted to the court. A mass exodus from a case is also rare, though the tumult did conjure an episode from last summer when Justice Department lawyers abruptly left a lawsuit over whether a citizenship question could be added to the census.

The day of upheaval began with a morning tweet from Trump that the Stone case was a "miscarriage of justice." He later told reporters he didn't speak to Justice Department officials, though he said he could if he wanted.

"I have the absolute right to do it. I stay out of things to a degree that people wouldn't believe, but I didn't speak to them," Trump said.

Hours after Trump's tweet, a Justice Department official called the original recommendation "extreme" and "grossly disproportionate" to Stone's crimes and said it would file a new sentencing memo.

The departures began soon after. Aaron Zelinsky, a Mueller team member, quit the case and his job in Washington, with plans to return to his position as a federal prosecutor in Baltimore.

Another early Mueller team member, Adam Jed, also withdrew from the case. His status at the Justice Department was not clear.

Another federal prosecutor in Washington, Michael Marando, withdrew from the case, and a fourth trial team member, Jonathan Kravis, resigned his position as an assistant U.S. attorney.

Sentencing decisions are ultimately up to the judge, who in this case may side with the original recommendation.

U.S. District Judge Amy Berman Jackson has repeatedly scolded Stone for his out-of-court behavior, which included a social media post he made of the judge with what appeared to be crosshairs of a gun.

House Intelligence Committee Chairman Adam Schiff said it would be a blatant abuse of power if Justice Department leadership intervened on Trump's behalf.

"Doing so would send an unmistakable message that President Trump will protect those who lie to Congress to cover up his own misconduct, and that the Attorney General will join him in that effort," the California Democrat said.

Federal prosecutors also recently softened their sentencing position on Flynn, saying they would not oppose probation after earlier saying he deserved up to six months in prison for lying to the FBI. That prosecution is also being handled by the U.S. Attorney's office in Washington.

In the initial memorandum Monday evening, prosecutors asked for Stone to serve between 87 and 108 months in federal prison — which they said was consistent with federal guidelines. Such a sentence would send a message to deter others who might consider lying or obstructing a congressional probe or tampering with witnesses, they said.

The prosecutors wrote that "Stone's actions were not a one-off mistake in judgement" and that he "decided to double — and triple — down on his criminal conduct by tampering with a witness for months in order to make sure his obstruction would be successful."

Stone has denied wrongdoing and criticized the case against him as politically motivated. He did not testify, and his lawyers did not call any witnesses in his defense.

Witnesses testified that Trump's campaign viewed Stone as an "access point" to the anti-secrecy site WikiLeaks, which was in possession of more than 19,000 emails hacked from the servers of the Democratic National Committee, and tried to use Stone to get advance word about hacked emails damaging to Hillary Clinton.