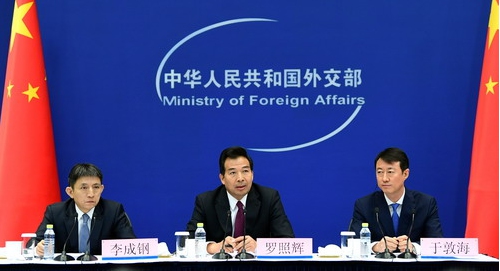 Leaders of China, Japan and South Korea are expected to discuss escalating tensions in the Korean Peninsula and the building of a trilateral free trade zone (FTZ) at the Eighth China-Japan-ROK leaders' meeting in Chengdu, Southwest China's Sichuan Province on Tuesday, senior Chinese officials said on Thursday.

Chinese Premier Li Keqiang will chair the summit in Chengdu on December 24 with the attendance of Moon and Abe.

During the summit, leaders will discuss a trilateral free trade zone which just went through its 16th round of negotiations last month and the Korean Peninsula issue amid stalled talks and escalating tensions between North Korea and the US.

As stakeholders and neighbors, the three countries will continue to play their role in advancing the peace talks on the peninsula and advancing the political settlement of the Korean Peninsula issue, Luo said.

Parties involved should keep restrained and maintain positive interaction to find convergence points and a reasonable plan to resolve concerns of each party, ensuring that the situation on the peninsula does not reverse, Luo said.

Cui Zhiying, director of Tongji University's Korean Peninsula Research Center in Shanghai, said that the summit may discuss the possibility of multilateral consultations similar to the previous six-party talks.

The three Northeast Asian neighbors are most susceptible to peninsula tensions which could deteriorate with the year-end deadline set for the US by North Korean leader Kim Jong-un, he said.

Flexibility was important, Cui noted, saying that if conditions for six-party talks are not mature, the mechanism could involve as many countries as possible in consultation to maintain the dialogue momentum.

An ideal and efficient method would be for North Korea and the US to sit together with mediators. Another approach would be that Japan and South Korea talk with the two countries separately, Cui said.

Amid tightening peninsula tensions, China and Russia Tuesday proposed the UN Security Council lift some sanctions on North Korea, including those related to the inter-Korean railway and road cooperation projects, media reported.

Cui noted transport will help build ties between the North and the South, and stabilize the peninsula.

The FTZ negotiations between the three countries will also be on the leaders' agenda at the meeting.

The three parties agreed that in the current complex and severe global economic situation, it is in their common interest to build an FTZ and accelerate the negotiation process in accordance with the consensus reached by the leaders.

Shen Minghui, a research fellow at the Chinese Academy of Social Sciences' National Institute of International Strategy in Beijing, told the Global Times Thursday that the prospects for FTZ negotiations were "positive more than ever," since rising uncertainties in the world are driving the three countries to expand into new markets and diversify trade partners.

Shen also noted that if concluded, the FTZ is also expected to become a test of China's further opening-up efforts in areas including investment, the service trade and e-commerce, which means Japan and South Korea could be an early beneficiary of the world's second largest economy's higher level of opening-up.