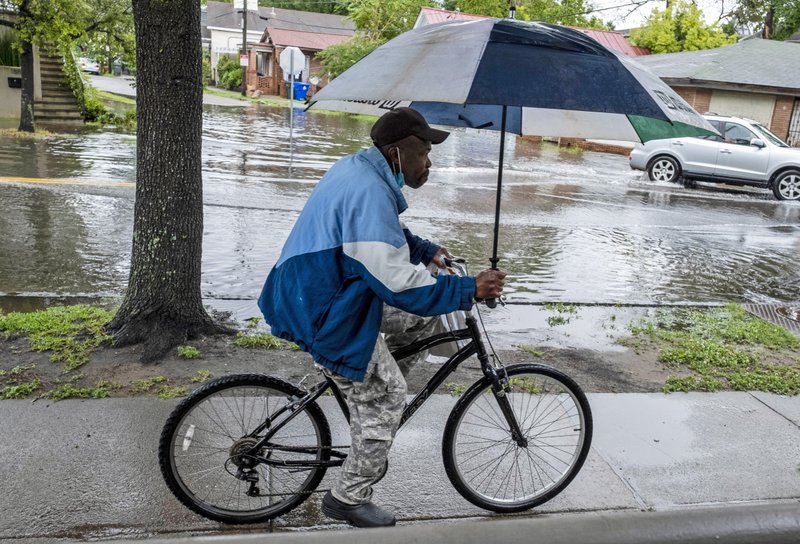 A man rides a bicycle while holding an umbrella as rain from Tropical Storm Bertha flooded a few streets in Charleston, S.C., Wednesday, May 27, 2020. (Photo: AP)

Forecasters expected the bad weather, but didn’t predict it to organize so quickly and become the second named storm before the official start of this year’s Atlantic hurricane season.

Bertha was named around 8 a.m. Wednesday and was onshore east of Charleston by 9:30 a.m. The state Department of Natural Resources called it “a sunrise surprise.”

Like almost all storms with heavy rain, several streets flooded in Charleston, leaving ankle to calf high brown water mixed with trash from knocked over cans Wednesday. Sea rise and an antiquated drainage system mean the city floods an average of more than once a week. Heavy rains from an unnamed storm last week caused more problems.

Less than 1,000 power outages and scattered downed trees were reported as Bertha and its 50 mph (80 kph) maximum sustained winds moved onshore and into eastern South Carolina.

Bertha was expected to weaken to a tropical depression as it moves rapidly inland, spreading up to 4 inches (10 centimetres) of rain into parts of North Carolina and Virginia. Flash flood watches were issued as the region has already seen plenty of rain in May.

The storm was centered about 40 miles (65 kilometers) northeast of Charleston, South Carolina, and was moving north near 15 mph (24 kph).

Evan Woodbury took videos of the storm before starting what he expected to be a slow day at the oceanfront restaurant he works at in Garden City south of Myrtle Beach.

A strong wind was blowing rain sideways. Closed umbrellas whipped in the roar of the wind on an empty beach.

“I’ve seen a lot worse than this. It’s just the surprise element of the storm.” Woodbury said. “It will definitely keep the tourists in.”

Bertha was the latest — and on the calendar the earliest — of a series of storms to affect South Carolina in the past four years. Hurricanes Matthew (2016), Irma (2017), Florence (2018) and Dorian (2019) have all brushed past the coast, causing major flooding in the much more active late summer and early fall.

Earlier this month, Tropical Storm Arthur brought rain to North Carolina before moving out to sea. It was the sixth straight year that a named storm has developed before June 1, the official start of the Atlantic hurricane season.

The last time there were two named storms before June was in 2016, according to Phil Klotzbach, a research scientist with Colorado State University’s atmospheric science department. It also happened in 1887, 1908, 1951 and 2012, he said.

“Most of these early season named storms form, at least in part, from non-tropical or subtropical processes and don’t necessarily imply anything about the remainder of the season,” Klotzbach said in an email to The Associated Press.