HONOLULU (AP) — Heavy rain and winds from a tropical storm downed trees, knocked out power and prompted evacuations of several homes on Hawaii's Maui island but spared the state widespread damage before continuing out to sea. 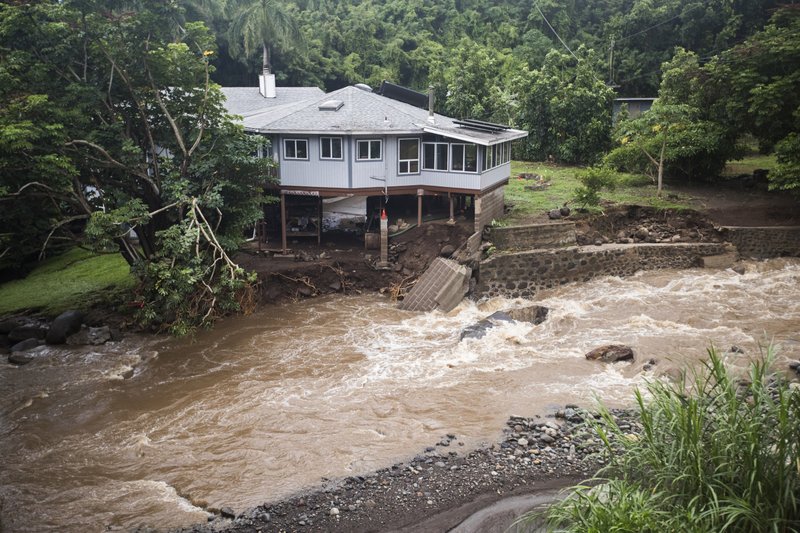 A home on Kahekili Highway near the Waihee River Bridge, was evacuated after a flash flood breached the property on Wednesday afternoon, Sept. 12, 2018, in Maui, Hawaii. (Photo: AP)

Weather forecasters warned heavy rains would continue through Thursday but Maui Mayor Alan Arakawa said he was hopeful the effects of the storm would be limited.

"It's been an ordeal but we're coming through this fairly well," Arakawa said at a news conference. "I'm not seeing any really large areas of damage, no homes destroyed or flooded to any kind of extreme measures as we did in previous storms."

The hurricane center said Olivia will likely weaken further and become a tropical depression by Thursday.

Maui County said several homes in Lahaina had to be evacuated because of rising waters in a nearby river. Another home in Waihee Valley was evacuated.

Kahulu Peltier-Yaw said she saw gushing water from an overflowing river blocking at least one part of eastern Molokai's only highway. She said it's common for the highway to become impassable when there's heavy rain. 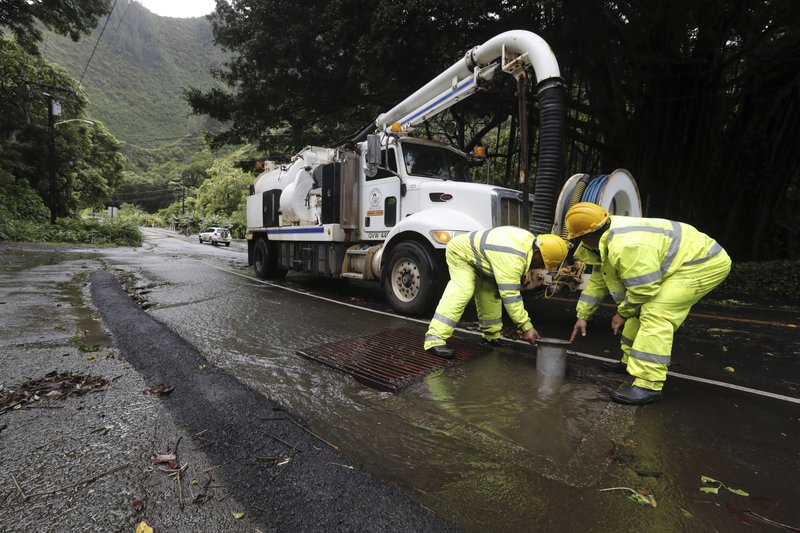 A flash flood warning was issued for Molokai island and Maui. A wind gust of 51 mph (82 kph) was recorded at the airport on the island of Lanai.

The storm, which was a hurricane earlier in the week, slowly lost power as it neared the state.

Forecasters cancelled a tropical storm warning for Oahu and Maui late Wednesday after the storm moved far enough south to put the islands out of range for stronger winds.

Matthew Foster, a meteorologist with the hurricane center, said moisture from Olivia will linger through Friday even though the wind threat has died. This, combined with an upper level system, may trigger heavy rain and possibly thunderstorms on Kauai, Oahu and possibly Molokai, he said.

Hawaii Gov. David Ige and Honolulu Mayor Kirk Caldwell both said they were keeping an eye on the leftover moisture.

"We're all being cautious. We all do need to be very cautious until tomorrow," Caldwell said.

Schools, courts and government offices were closed in Maui County in preparation for the storm.

The Federal Emergency Management Agency sent emergency teams and supplies to Maui ahead of the storm. The National Guard has mobilized personnel and trucks to the east side of Maui.

President Donald Trump has signed a disaster declaration for Hawaii, which will help FEMA respond, the governor said.

Public schools on the Big Island, Oahu and Kauai were open.

Tourists, like Randy McQuay from Texas, weren't letting the storm dampen their vacations. "No, coming from Houston we're used to storms and hurricanes," he said. "Didn't expect to find one in Hawaii, but yeah we're used to it."

Solana Miller, who lives on Oahu's North Shore, said she wasn't too worried about Olivia.

She has leftover preparations from when Hurricane Lane passed near the state last month.

"We kind of just kept all the water and the cans of food and stuff," she said, "so if anything really hits we'll be fine."