WORLD Tropical storm Henri leaves up to 12 bln USD in damage in US Northeast: media

Tropical storm Henri leaves up to 12 bln USD in damage in US Northeast: media

NEW YORK, Aug. 24 (Xinhua) - Tropical storm Henri hovered over the U.S. Northeast for two days, slamming some areas with up to 10 inches of rain, leaving behind a wide swath of mud, debris and devastation, as well as inflicting a total loss of 8 to 12 billion U.S. dollars, USA Today reported on Tuesday. 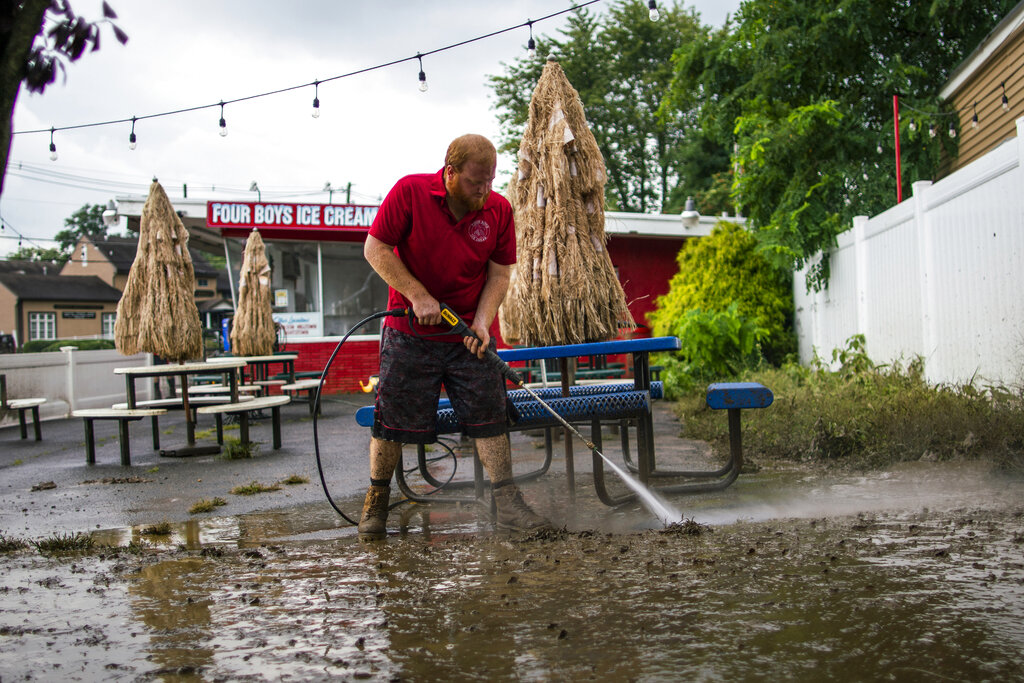 A worker cleans the outside area of Four Boys Ice Cream store during the passing of Tropical Storm Henri in Jamesburg, N.J., Monday, Aug. 23, 2021. (Photo: AP)

The storm was centered 50 miles east of Providence, Rhode Island, downgraded to a post-tropical cyclone upon its landing, and then headed east. On Tuesday, the lights are mostly back in Rhode Island and Connecticut, and floodwaters has receded from New Jersey and New York. Henri is drifting out to sea.

Central New Jersey was among the areas hardest hit, as rainwater rushed through streets like rivers. "Part of the state got crushed," Governor Phil Murphy was quoted as saying. "It was a huge, massive rain event. This is double digit inches in some cases of rain. Unheard of."

In Rhode Island, where Henri made landfall Sunday afternoon, about 8,000 homes and businesses remain without power on Tuesday. Almost 100,000 were dark at the peak of the storm. The utility National Grid brought in workers from Massachusetts to help restore power and said all customers should have power by Wednesday.

Most of Henri's heavy rain doused New Jersey, Pennsylvania and New York, while leaving some areas east of landfall relatively dry, according to AccuWeather, an experienced local and international weather forecaster.

Henri originated from a well-defined low-pressure system north-northeast of Bermuda on Aug. 16 as a tropical depression. Nearly a day later, the system strengthened into Tropical Storm Henri. Henri strengthened into a Category 1 hurricane, before weakening back to a tropical storm and making a rare landfall in Westerly, Rhode Island, on Aug. 22.