Tropical storm Ana has killed at least 46 people in Madagascar, and Mozambique along with Malawi, which lost most of its power because of flooding, authorities in the three countries said Tuesday. 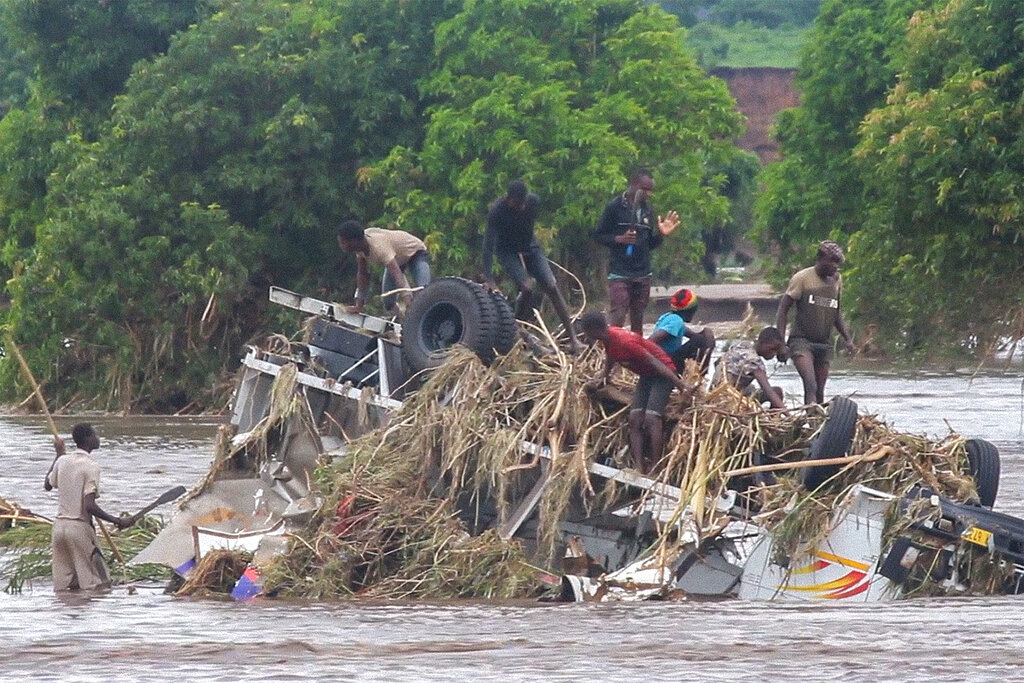 In this image made from video, people stand on an overturned vehicle swept by flooding waters in Chikwawa, Malawi, Tuesday Jan. 25, 2022. Mozambique, Madagascar and Malawi are counting the deaths and damage by tropical storm Ana and more than a week of heavy rains across southern Africa. (Photo: AP)

The storm, which formed over the east coast of Africa's largest island Madagascar, has brought heavy rains causing flooding and mudslides in the capital Antananarivo.

The latest report from Madagascar's disaster management agency on Tuesday showed that 39 people have died and nearly 65,000 have been left homeless since last week.

Several low-lying districts of the capital remain under high alert and emergency evacuations were launched overnight.

"We are in the process of evacuating people from flooded areas," John Razafimandimby, rescue unit director in the disaster management agency, told AFP.

After crossing the Indian Ocean, the storm made landfall on mainland Africa on Monday bringing heavy rains and strong winds in Mozambique's central and northern districts.

Mozambican officials on Tuesday said three people were killed, with at least 49 injured in the province of Zambezia.

More than half a million people have been affected in Zambezia as well as Nampula and Sofala provinces, according to the Mozambican government and UN agencies.

The National Institute for Disaster Risk Management said a clinic and 16 school classrooms were destroyed overnight.

The UN forecasts the storm will cause widespread flooding, displace people and damage infrastructure.

The storm will potentially affect "highly vulnerable populations who have already suffered from previous natural disasters and conflict in northern Mozambique," the UN Office for the Coordination of Humanitarian Affairs said in an update.

Four people died in neighbouring Malawi, where the storm plunged most parts of the country into darkness overnight after flash floods raised the water levels, forcing the electric company to shut down its generators.

"Our generation depends on water levels, and currently the levels are too high for us to run the machines. It is too risky," Moses Gwaza, spokesman for the Electricity Generation Company, told AFP.

In an update on Tuesday morning, the company said it was starting to restore power generation.

The Mozambican Meteorological Institute forecasts between four and six cyclones in the region during the current rainy season, which ends in late March.