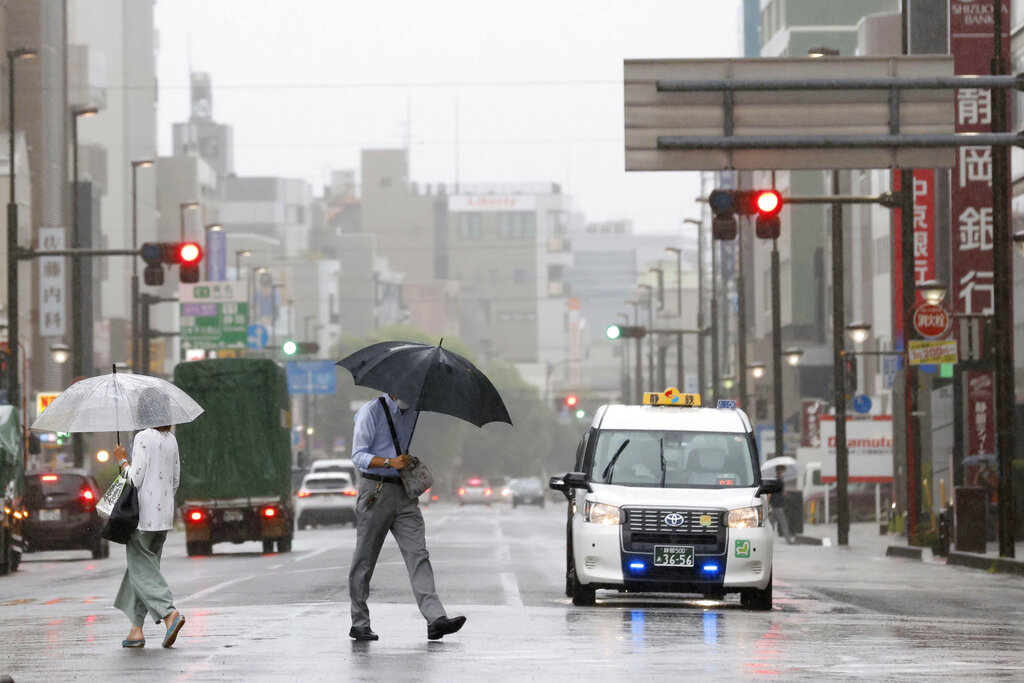 The Japan Meteorological Agency said that Meari made landfall in Shizuoka Prefecture, southwest of Tokyo, in the afternoon, bringing sudden heavy rains and blasting winds to a widespread area, and prompting warnings about mudslides and flooding.

More than 72,000 people in the area's main city of Shizuoka were told to evacuate due to possible landslides.

Meari, packing sustained winds of up to 72 kilometers (45 miles) per hour, passed over Shizuoka and was traveling at a speed of about 20 kilometers (12 miles) an hour and was expected to continue northward before veering eastward, swinging over the Pacific Ocean by early Sunday.

The Tokyo area was hammered by periodic downpours starting in the late morning. Warnings on high waves in coastal areas were issued for Tokyo, Kanagawa Prefecture, southwest of Tokyo, and other nearby areas.

The authorities warned against going near rivers or other waters, as the levels may rise suddenly. Rainfall was expected to worsen in Tokyo and areas north of Tokyo in the evening, they said. Warnings on flooding, strong winds and heavy rainfall were issued for the Tokyo area.

Japanese media reports showed video of rivers rising perilously, almost reaching bridge decks, as rain splashed down on homes and people scurried in the streets, clinging to their umbrellas.

Japan is in the middle of the Bon summer holidays, and vacationers are traveling in droves but some have had to cancel or change plans.

The Rock in Japan Festival 2022, which began a week ago in Chiba Prefecture, east of Tokyo, canceled the event for Saturday, the final day of the outdoor festival, and promised ticket refunds.

All Nippon Airways has canceled some local flights in response to the storm. Low-cost carrier Skymark Airlines also canceled some flights. Bullet train services were delayed, and speed limits in tunnels in Shizuoka were temporarily lowered as a cautionary measure. Sections of the Tomei Expressway, which connects Tokyo with Nagoya, were temporarily blocked off because of the heavy rainfall.

Northern Japan has had some heavy rainfall lately, and worries were growing about landslides. Rainfall was forecast to subside by early Sunday in the Tokyo area, but then it will hit northeastern Japan.

The world's third largest economy has often seen deaths and injuries caused by seasonal storms and torrential rainfall that damage dams, blow off rooftops and bring down power lines.